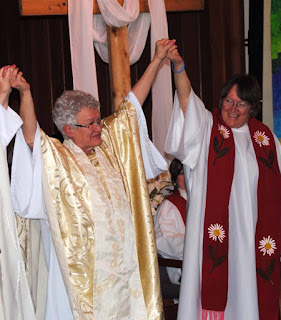 I mentioned in the third part of my LarryD trifecta, that Larry has brought back his "Adopt-A-Priestess Project" wherein he hopes to be a part in bringing a group of apostates back to the Catholic Church through "Masses, rosaries, Divine Mercy chaplets, adoration, fasting – whatever devotion or means that works for you". These so-called "women priests" have excommunicated themselves by participating in a fraudulent ordinations.

Contrary to what these women priests and their supporters would have us believe, they are not Catholic priests. Any Mass or Eucharistic service in which they lead are not valid and they are paving the way for their own damnation and the damnation of their misguided followers.

"Wherefore, in order that all doubt may be removed regarding a matter of great importance, a matter which pertains to the Church's divine constitution itself, in virtue of my ministry of confirming the brethren (cf. Lk 22:32) I declare that the Church has no authority whatsoever to confer priestly ordination on women and that this judgment is to be definitively held by all the Church's faithful."

When I published my post on Larry's project, I had requested a name, but due to the 12 hour time difference, I had not received the name of a "priestess". Larry has since responded and the name given to me is Kathleen McShane Bean .

Mrs. Bean engages in her sacreligious ceremonies for the Living Beatitudes Community of Dayton, Ohio located in the lower depths of an Episcopal church building.

Mrs. Bean claims to be a Catholic priest, in spite of the fact that the Catholic Church does not consider her to be a ordained priest. It is telling that her theology degree (M.A.T.S) comes from united Theological Seminary  which is self described as being affiliated with The United Methodist Church.

To further add to her disregard to Catholic teaching, Mrs. Bean is married.

Let us pray that Mrs. Bean will come to recognize the error of her thinking and return to the one, holy, catholic, and apostolic Church.