Pope Francis: Women Will Be Banned From Priesthood Forever 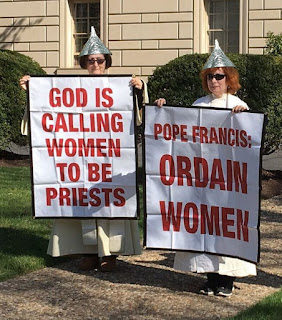 Some folks just won't take 'no' for an answer.

In 1994, Pope John Paul II wrote in an apostolic letter, Ordinatio Sacerdotalis that "the Church has no authority whatsoever to confer priestly ordination on women". and "priestly ordination, which hands on the office entrusted by Christ to his Apostles of teaching, sanctifying and governing the faithful, has in the Catholic Church from the beginning always been reserved to men alone".

Now, hoping that Pope Francis will contradict Saint Pope John Paul II, a Swedish journalist asked the Pope whether it was realistic to think that there might be female priests in the next few decades.

According to reports, Francis responded, "On the ordination of women in the Catholic Church, the last word is clear."
"It was given by St. John Paul II, and this remains," Francis said.

How many times does it have to be spelled out?

No female priests in the Catholic Church. You don't like it? Become a Protestant. That's pretty simple.

Pope Francis: Women Will Be Banned From Priesthood Forever