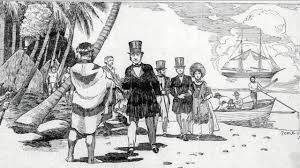 Self-righteousness is one of our more annoying characteristics.  It's also one of the most common of them.  Through it we assure ourselves of our own goodness, and are inclined to berate, or preach to, those lacking enlightenment.

SEO Trends and Vitals for 2021
JoJo Siwa le presenta al mundo a su n…
Market gapped down on Covid fear, new…
How to Organize a Blog Post and Struc…
HEALTH AND WELLNESS EXPLAINED ~ E…
Among us, missionaries must be most convinced they possess the truth; that they know it, the way and the light.  How else explain their propensity to travel throughout the world, sometimes at great trouble, teaching those who aren't like them that they should--indeed must--think like them, act like them and be like them.  I confess I'm not fond of missionaries.

Missionaries are manipulators in the sense that they strive to convince or control others.  They may be well-intentioned manipulators, but they manipulate nonetheless.  We've long known that the various Media excel at manipulation for a variety of purposes, some of them considerably less than benign.

I wonder if there are those who, like me, have noticed a certain tendency of those who manufacture commercials, TV shows, movies and other entertainments for us, to teach us that certain people, certain ways of living, are good or at least should considered and treated as good as other people, other ways of life.  These efforts certainly seem well-intentioned, and I have no quarrel with them or what they convey beyond the fact that they seem heavy-handed and are in some sense presumptuous, and appear to arise from a Missionary impulse.  In my imagination I picture a gathering of righteous writers, directors, producers, actors, their leader proclaiming "Let us go among them, the unknowing and ignorant, and teach them the Way, oh my brothers and sisters or whatever you think yourselves to be."  Perhaps my imagination is unfair.

The world as portrayed by the Missionary Media is one in which different races, people disabled and not disabled, blissfully and peacefully interact, marry and have children, in which gay men and women smooch and have sex just like straight people and interact with straight people peacefully, marry and have children, and everyone gets along well and are shown to be just the same deep-down as everyone else, no reason to be upset about other folks different from us and what they do or want to do.  The members of the Missionary Media in my perhaps unfair imagination say:  "See?  We're showing that to you on that screen you're gazing at, the same one you gaze at all the time.  You'll get used to it, you'll learn, because we've put it on the screen."

I feel compelled to say, again, that the world being portrayed by the Missionary Media is one that would be fine with me, one in which I'd be happy to live.  But it clearly doesn't exist at this time, no more than the world of Father Knows Best or My Three Sons or Leave it to Beaver existed at the time those shows were popular.  More significant and more disturbing to me, however, is the fact that the Missionary Media is being missionary.  I don't think it should be.

Members of the Missionary Media include not only those who provide us with commercials and entertainments, but the ubiquitous pundits that infest our society and, most obviously of course, evangelists.  I wish they would all go away.  It isn't their business to tell us their opinions, to convert us, to use entertainments to teach us what they think we should think and do, even when there is nothing objectionable about that or when thinking or doing or acting consistent with their manipulation is good, admirable.  Why do I make this claim?  Because manipulation is manipulation, and we shouldn't manipulate others to do our bidding.