Yes, We Have a Banana (Republic) 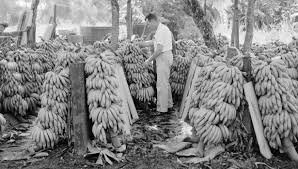 The great Louis Prima, best remembered I think for Jump, Jive and Wail, also did a song called Yes, We Have no Bananas.  The latter song may be better known, but is more offensive, as it describes a Greek-American grocer who doesn't like to say "no" telling someone his store doesn't have any bananas.  Louis was himself of Sicilian heritage, and I think should have known better.  Regardless, that song provides the basis for the title to this post.

Cup and handle failed, what now?
10 Career Paths Where the Future is T…
The Punisher: A Timeless Character
Langa Mavuso – Sunday Blues
Corazón Astral: el himno de Javiera M…
Certain nations were once--and perhaps still are--referred to as "Banana Republics"; states largely dependent for revenue on one or sometimes a few crops, and in any case limited resources, managed by a plutocracy and sometimes foreign powers (including the U.S.) which regularly experienced changes in government, all to better suit the plutocrats.  They lacked stable Politics and stable political institutions, and nobody paid much attention to actual elections, which generally were fixed.  A chain of clothing stores are also called "Banana Republics" because, I believe, the name is thought to invoke tropical, outdoorsy, travel wear.  Those stores are not being referred to, this time, which may or may not disappoint the reader.
I don't think we're a bona fide, if that's an appropriate phrase, banana republic just yet.   We're arguably a plutocracy, true.  But at least in the past, we haven't given the world the impression that our politics and political institutions, and our elections, are all for show, mere facades, and may be denied and ignored.  Things have changed, however.
The outcome of a presidential election was challenged not all that long ago, but that involved a different set of facts entirely.  As far as anyone knows, and based on what evidence there is and has been made available even by those challenging it, there is no basis on which to doubt the 2020 election and its result.  Because there's no legitimate reason to deny the result, but it is being denied nonetheless to the detriment of the nation, we appear to be a banana republic.
Although he's the obvious culprit, we can't blame this mess entirely on the sad, strange, damaged man who lost the election, much as he claims so pathetically to have won it.  His equally sad and strange minions, including those Republicans who have tolerated and facilitated his antics, share in responsibility for this diminishing of America on the world stage.  We can only hope that our Republic will survive him intact.  Unfortunately, if he does indeed suffer from what the DSM used to call Narcissistic Personality Disorder, then it seems likely he will do all he can to create problems for those who have rejected him, which in this case includes the better part of the citizens of our nation.  Being unable to seek retribution against us individually, it makes sense to think he'll seek to do so to the electoral system he believes failed him and to thwart those actually elected by the same system.
What fascinates and concerns me most in this situation are the craven, venal and self-regarding individuals in power who support him and his efforts to subvert our politics and cast doubt on the electoral process, for no discernable legitimate reason.  I don't think we can assume that these people are all as gullible and deluded as others who seem react to him as members of a cult do to the cult leader.  There must be some other reason which motivates them to encourage him.  It's impossible to believe that they think what he's doing is for the good of the nation.  That would be to consider them to be utterly unintelligent.  So, the reasonable inference is that they act in pursuit of what they think to be their own best interests.
As we're considering the politics of our Glorious Union, this means they're acting in a way they think best preserves or increases the money and power available to them.  One can see that the election of a Democratic president would adversely impact the money and power available to Republican politicians.  So it makes sense to think that they're playing along in the hope that even frivolous challenges to the outcome of the election will ultimately result in some good--for them.
It will be interesting to see how far they'll go in putting their interests before those of the stability and status of the nation.  The cynical view is that they'll go as far as they can without putting their own power, money and interests, and those of their friends, in danger.  Since none of the players appear to be principled and all of them appear to be supremely self-regarding judging from their conduct in the last four years, this is probably the most reasonable view to take.
We should fasten our seatbelts, as Bettie Davis famously said in All about Eve.  We may learn soon just how corrupt our politics and politicians have become.

I’m doing what I can right now

13 TIPS TO STAY IN SHAPE DURING THE HOLIDAYS

Yes, We Have a Banana (Republic)