Our Feast of Fools 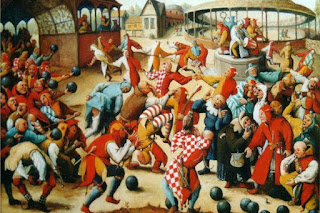 Welcome, all! Or better, perhaps--Come one, Come all, to America's Feast of Fools!

Based somewhat loosely on the Medieval Feast (or Festival) of Fools--pardon me, Festum Fatuorum--this festival, which is of relatively recent origin, is formally held on the date of every presidential election, but the festivities are known to extend for several days after voting has taken place.  While the Medieval Feast celebrated the election of a mock Pope or Archbishop, we here in the United States celebrate the election of a mock President.

Cup and handle failed, what now?
How and Why America Was Hit So Hard B…
Top 10 Best Live TV Streaming Sites 2…
How Universal Basic Income Gets Attra…
Self-Care Sunday & Favorite Nonfictio…

Most of us are familiar enough with the original Feast, having seen it animated in Disney's strangely disturbing Hunchback of Notre Dame.  The most ridiculous or grotesque person available was made Pope/Archbishop, and all joined in laughing at that figure while purportedly offering it reverence.  Liturgical and religious ceremony was parodied.  It shared certain characteristics with the Roman Saturnalia.  We in the U.S. similarly elect some absurd personage as president and ape the ceremonies of a democracy or republic.  Here, though, we don't laugh at the Feast.  Instead, or so I suspect, we're laughed at by the rest of the world.

What a spectacle we must make on the world stage.  I have a vague recollection of claims of American exceptionalism; the belief that we were favored in our form of government, our republic, our institutions, which allowed for the expression of the "will of the people" but protected the voice of the minority, and the peaceful transfer of power, the rule of law, etc., and our pride in our good fortune in being so enlightened.  Now we seem to be no more fortunate and no greater in this respect than most other nations.  No doubt there are those who enjoy how America, the (High and) Mighty, has fallen.

Ostensibly at least, our politics, though driven in most cases by the pursuit and use of money uber alles, has managed to honor the election process.  There have been very few cases where the process has been subject to challenge, and claims of fraud were seldom made.  Those who lose have acknowledged losing more or less gracefully.  Things have changed, though.  Now we have those who are against votes and voting itself if their interests are are not met, and if they fail to retain their positions due to the election process.  Most of all depressing is the fact that a large portion of the electorate isn't disturbed by this and even joins in the rejection of votes and of the right to vote.

Why has a change of this magnitude taken place?  I've pondered the use or misuse of the Internet before and have worried about its negative impact, and hate to sound like the proverbial broken record, but I think that it provides a means by which the ignorant, the misinformed, the authoritarian, the hateful, the bigoted--in short, those who are unwilling to accept anything they don't understand or perceive to be contrary to themselves and their interests, whether or not it is achieved legally or is not illegal--may communicate and coordinate, may plan, may indoctrinate, may foster discontent and act on it.  In a world in which any person may communicate anything without real effort and find those who share their feelings and support them, and where verification and careful, critical thought is discouraged, many dangerous people will thrive and their ranks will swell.  Manipulation of thought and feelings will be easy.  It's certain that manipulation is taking place.

Curiously, though communication of information and opinion is easy and widespread, ignorance and misunderstanding increases as a consequence.  Contrary information and opinion is available, but one won't become aware of it unless it's sought out.  It can be ignored.  One need not learn anything unless there is a desire to learn.  There is no desire to learn, however, where there is no reason to and prejudice and ignorance is encouraged by a host of others of like minds (if that word can be used) who reinforce accepted views.

Be careful out there.  Zombies of a kind actually do exist and thrive.  They don't eat brains, perhaps, but they don't think they need them, nor do they want to use them.

5 Poison-Free Ways to Rodent-Proof Your Home

Our Feast of Fools