A Most Unhappy Halloween 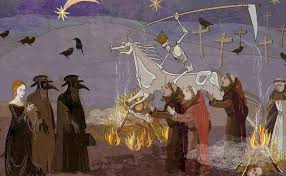 Halloween is particularly well placed in the calendar this year, shorn of its festive cloak due to what the Pontifex Maximus, for reasons unclear to me, referred to as "the lady" Covid.  Perhaps ladies are generally pestilent to the Catholic clergy--except, of course, for one Lady in particular.  Barely festive at all, in fact, for the children who benefit from the holiday in its largely secular form.

But what could be more appropriate at this very unfestive time?  Fear stalks the land in the form of someone as orange as a pumpkin, though not great in any good sense, along with the pandemic which seems to be growing.  Fear fostered by many for the most cynical reasons.  By politicians, that is to say, or at least those of them who are motivated primarily is not exclusively by the desire to retain power.  Fear also of uncertainty.  Fear of people wielding guns at polling places; fear of what might come of a Supreme Court whose latest member has minimal experience in law and seems to have been chosen for purely political reasons; fear of violence; fear of fraud in the election; fear that voting will be repressed.

Market gapped down on Covid fear, new…
Capture Attention and Drive Traffic w…
The Top 3 Secrets to the Female Orgas…
8 Points to Consider When Trading Bi…
Learning The 3 Parts of My Change Tri…

Yes, Halloween will be scary this year if only due to the harrowing and hectoring political advertising to which we're exposed and the proximity to election day, which may or may not decide our fate, or which may or may not merely prolong the period in which we wait to know our fate depending on what options are available in the courts (I won't call them "legal" options for fear--what else?--of giving them more dignity than they merit).

Unfortunately, we can't take comfort in the wise, gentle and humorous traditions of this time of year, like the celebrations associated with the Day of the Dead.  There our deceased loved ones are thought of as still living and parts of our continuing families.  But imagine what our ancestors would feel if they could truly share our time with us.  They could only be angry of what we've become, or full of sorrow for us in our sorry state.  As for the saints of All Saints Day?  Well, perhaps they could at least intercede for us, assuming they would be heard.

Perhaps a mass exorcism is in order.  Priests brandishing the Rituale Romanum and reciting its text on exorcism should be walking among us, or perhaps driving among us in vehicles sporting loudspeakers, together with fundamentalist preachers casting out devils as some of them do on television.  Why not give it a try?  What do we have to lose?  Certainly not our dignity, which is long gone.

Jonathan Swift's Gulliver, in one of his travels, encounters the Houyhnhnms, a race of talking horses, wise, reasonable, and benevolent who rule over deformed, ignorant creatures resembling humans called Yahoos.  Though taken in, he's eventually banned by the Houyhnhnms for being too much like a Yahoo, or even a Yahoo himself.  He despises Yahoos, though, and when he returns to England can't stand living among his fellow humans.  He becomes a recluse, and spends his time in the stables talking to the horses.

He also more famously encounters the Lilliputians, a tiny people who are concerned with trivial matters and are obsessed with displays of authority and power.

I'm not certain whether we're more Yahoos or Lilliputians, now.  A combination of the two, perhaps.  If we could celebrate Halloween traditionally, we should dress up as both.  Or it may be no costumes would be required.

A Most Unhappy Halloween