[Bonus material not in the original FB post] So I asked the dude, Blake, if he was busy, and he said, "Pretty free, what's up?" "Let's have a chat," I said, "I wanna talk to you about something, but it's potentially kinda awkward." "Oh?" he said, as I awkwardly gestured for him to take a seat in the computer room. "Yeahhh. Don't worry though, it's not a gay thing! I'm not about to profess my love for you," I joked, laughing, though technically, anything that I say would, by default, be a gay thing. But anyway.

So I told him about how I didn't always feel comfortable around him because of the lack of communication; how sometimes I felt there was a "zone of silence" around him that meant I couldn't talk to him, and how that uncomfortable "zone of silence" sometimes infiltrated my bedroom because we are virtually separated by a single wall when he's at his computer, meaning I often feel inclined to leave my room when he's out there gaming and stuff. I told him that even though I'm not by any means a supremely social person, I am an extroverted emo sensitive artist (LOL) who does frequently draw on — and is affected by — the energies of other people. Hence, a "closed-off" energy wasn't particularly palatable.

I also explained why it was important for me to talk to him, and not the other remaining antisocial housemate, about this matter: because of the Venn diagram. What Venn diagram, you ask? Well, these Venn diagrams:

Upkar New Paradigm Reasoning Book PDF…
Mancora Peru Nightlife 2020 {Where To…
There are 16 Personality Types. What’…
Quilting with the Husqvarna Viking HU…
Suleiman the Magnificent’s Carpets: A… 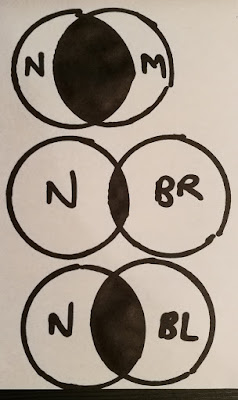 These circles represent spatial overlap/paths crossed between Nick and housemates. The black areas are obviously the degree of overlap.

As you can see, Nick and M cross paths significantly because both of us work from home; fortunately, M's the outgoing one; if he were antisocial, and we were spending so much time with each other in the common areas of the house, I would've gone nuts a long time ago!!!

Nick and Blake have a significant enough overlap that makes it just that much uncomfortable for us to be in the same room sometimes, especially if we don't talk. As for Nick and Br... well, we'll come to that!

Anyway, I explained this (without visual representation) to Blake, and he took it really well! He seemed receptive; agreed that in the 10 weeks since I moved in we'd not had a single decent conversation (until this one); admitted that he's "not a talkative person"; and said he totally understood where I'm coming from.

I also told him how I'd begun planning my activities to coincide with his coming-home time to reduce the Venn diagram overlap: spending too much time at Dome, purposely going to the gym in the evenings etc; dodging rooms he's in to avoid awkward silences and non-communication, not feeling comfortable in my own home. We both agreed that shouldn't happen.

I reassured him I don't expect him to change — people rarely change for other people, sometimes not even their partners!, much less virtual strangers/housemates — but at least by just being cognisant of the fact that I was being affected by the "invisible wall of non-interaction", small steps could be made to rectify the situation; hopefully we'd eventually be able to dismantle the invisible wall so that I don't feel as if a) he doesn't like me (which he says is not true) and b) I can't talk to him (which he says is also not true, unless he's "intently gaming and or listening to music and shite"). Arf.

Now he's outside at his computer [as of the time of the FB post] and for the first time in a long time I don't feel compelled to close my door. Let's see how things go moving forward; I'm cautiously optimistic. And with 2/3 of the house potentially communicating/interacting/having camaraderie with me, the balance of power has shifted towards the positive, and the remaining antisocial bloke (plant-smoking guy) can remain the housemate who I only very occasionally interact with, so much so that it's a novelty to greet him when our paths cross. #nickforthewin

What Is Web Hosting? Understanding how it works and its type

Reality doesn’t go away but how we see it, well that’s something else!