Chai and I - a love story! #SuperBloggerChallenge

My relationship with tea goes back a long way. I think it was the Madhatter's tea party that first got me all curious. I must have been barely seven then. That was a time and age when children my age were forbidden from touching any kind of adult beverage. However, even as a child, I was always the curious sort and an early introduction to books had only managed to fuel this sense of wonder and curiosity in me.
I would watch the adults sipping on their cups of tea, while I listlessly nursed my glass of milk, sulking at the unfair privilege age allowed them.
Alice was allowed to attend a tea-party. Then why wasn't I? I had raised the argument with my father once. "Because we are not mad hatters," he had laughed at his own joke. I was being clearly outwitted.

Until one day, I decided enough was enough. I was clearly missing out on something. I couldn't wait until I was a grown up to quench my thirst for this forbidden beverage. It would take me ages to get there. And so, with dogged determination, I did what every manipulative seven year old would do in times of emergency; I tried throwing a silent tantrum.
I stayed mum all day, refusing to talk to anyone until my demands were met. I pushed away my glass of hot milk and with animated gestures insisted that I was served what everybody else was having. After several futile attempts at dissuading me, my mother finally gave in and agreed to offer me a sip from her cup, on the lone condition that I'd finish drinking my milk later.
I grinned. The silent tantrum had worked. The negotiation was done! I promised I would drain my glass of milk to the last drop if only she'd allow me to have a few sips. Although I was aware that it was clearly my mother who had got better part of the deal, I knew beggars couldn't be choosers. Besides I was afraid they would adjust themselves to my silence (and God forbid, even begin to enjoy it) had I to push my luck. 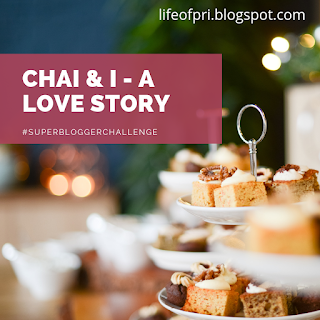 For a good many months, I obediently settled for sips of my mother's tea as part of our negotiation...until one day, curiosity (that was until then my forte) got the better of her, and she stealthily entered into the kitchen just in time to see me draining my glass of milk in the sink. My secret was out!
She stared at me in silence. My mind was already coming up with excuses. I knew my life was over. My mother would lecture me on the hungry kids of Somalia, her favorite topic, when I refused to eat the veggies on my plate. She would take away all my books and distribute them among my cousins. Or perhaps she would forbid me from having another drop of tea. Before she could say anything, I went in full drama-queen mode. I started to over-explain. I bawled. I protested. I told her I couldn't let the milk ruin the taste in my mouth...not when I was being allowed just a few precious sips of the chai I so craved.

She was still staring at me. And then she laughed. "We have a tea-junkie in the house" she told my father, narrating my shenanigans later that evening. They both chortled as I stood there, staring at them with my best puppy dog expression, hoping I had convinced them into allowing me to make the grand 'doodh to chai' switch-over.

The next day onward, I was given my own cup of tea. And that is how my journey with tea started...

While the other adults in my extended family frowned at my parent's decision to allow me what I wanted (tea over milk, to be precise), I acted eternally indebted to them, much to the point of suspicion, until I was completely sure they weren't going to change their mind.

As I grew up, I started thinking of myself as a tea connoisseur of sorts. No matter where I went, I could not make myself leave the place without trying the tea there. Hitherto, I have enjoyed various varieties, namely lemongrass tea, iced tea, kulhad chai, butter tea, tandoor chai, Darjeeling tea, Assam tea, oolong variety, and some other herbal infusions.

Thinking about it, I can say that my preferences too changed dramatically over the years.
During my childhood or pre-teen years, I loved the more milky, extra sugary type of tea. I guess this had more to do with the tea-drinker adult image that I was so fascinated with. During my adolescent  years, it was masala chai that became my favorite. Perhaps the spice level of that chai was more in tune with my feisty teenage years. Somewhere during medical school, my choice of tea changed again. Late night cramming for exams and a hectic schedule meant me downing cups of black tea to keep me up and about.
Cut to present day, I am me, more mature and level headed (or so I like to believe), much more concerned about my health and fitness than I was years ago. I am still a tea lover nevertheless. But over the last few years, my choice of tea has changed once again, this time to a more soothing cup of green tea.

When I first started having green tea, around three years ago, it took me a while to get adjusted to its characteristic 'grassy' flavour. But soon enough, it had found its way into my routine. Green tea, is not just more soothing and relaxing, but also possesses a lot of health benefits.
Allow me to elaborate...

What made me opt for green tea?

Green tea is loaded with healthy nutrients. It is rich in antioxidants, polyphenols, flavonoids, and catechins.

Ergo, green tea is literally the elixir of life. Of course all the above benefits are based on correlation and should be supplemented with healthy eating and fitness habits. One cannot be reckless in all their habits and expect a miracle out of green tea alone.
However, every time I traveled, I was rudely reminded of how good things in life are often either overpriced or simply unavailable. The cafes en route would either roll their eyes when I ordered green tea or came up with an exorbitantly priced pitcher of some ambiguous green-tea brand. So when I read about the vacuum insulated tea infuser bottle, I immediately made up my mind and placed my order at Amazon. 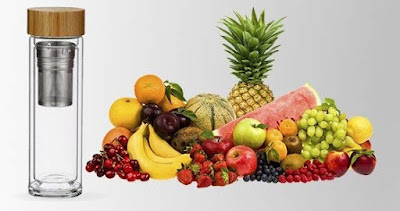 With advanced temperature control, this double wall vacuum insulated design helps keep both hot for 1 hours and cold up to 24 hours. Also the vacuum insulted thermos travel mug is the perfect travel companion for those who want to have their regular green tea-fix even on the go, and be spared of judgmental looks and hole in the wallet.
The infuser bottle can be used not just to create infusions of green tea, but also to prepare infusions of coffee, fruits etc. Detach the steel infuser, and it can be used as a simple water bottle too.

Of course, it is no rocket science.
And that, my friends, is how I prepare a perfect cup of green tea.
I normally prefer to add a dash of lemon in my green tea. Lemon aids in the absorption of some of the nutrients in the green tea.
So that's it, folks. Now that you all have read a slice of my love story and are privy to the secret of my energy (nope! it has never been a chocolate milk-drink that the ad mad world leads us Indians into believing), I will end this post by rephrasing a popular scrapbook line that most of us would fondly remember scribbling in each other's scrapbooks as kids.

Cannabis Stocks are Hot on the Watchl…
Blockchains to Backup Parametric Insu…
Best Gaming PC Build for 1080p: Under…
Beautiful Celebrity Couple Pics
Where To Stay In Barcelona 2020 [The …

Chai and I - a love story! #SuperBloggerChallenge