Renovation project: a ten-minute update for an eight-year-old sofa

We’ve been meaning to do something about the sofa for quite some time now. Funny, not too long ago I came across the blog post I wrote in 2008 when we bought it. It’s been a great couch – oversized and slouchy, with plenty of room and plenty of tolerance for being at the hub of a busy life full of boys, dogs, cats, visitors, and a lot of spilled coffee. 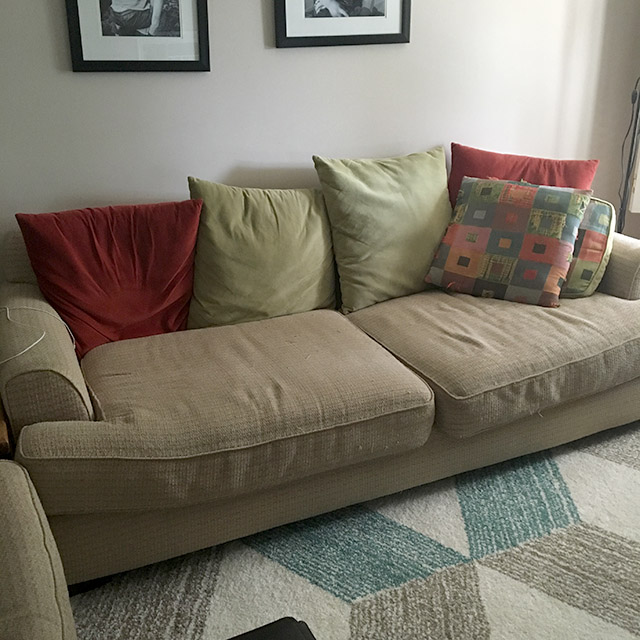 While it’s a comfy couch, it’s starting to look more than a little bedraggled. How did I let the pillows get to this state of threadbaseness? Life is busy, yanno? 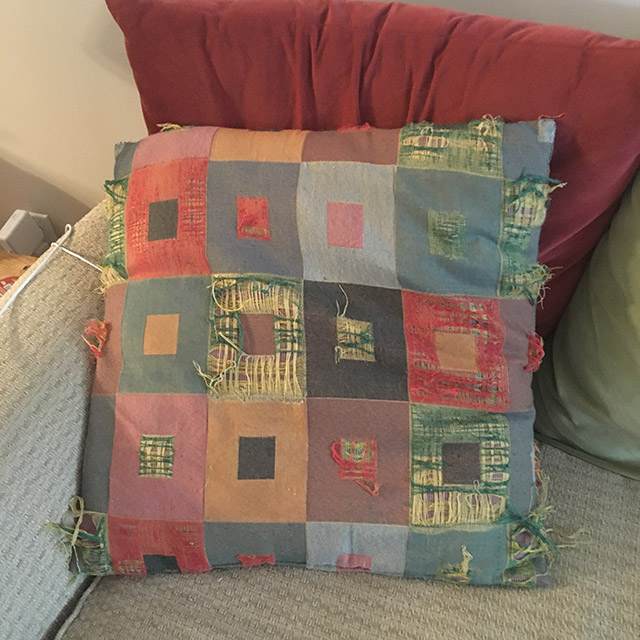 Also, I have to admit that the green and red Colour Scheme has worn almost as thin as the pillows. Since the first year we came back from PEI, I’ve had in my head that I’d like a “sand and sea” colour scheme in the living room. There’s no room for geometric green and red in my sand and sea vision.

A new sofa is simply not in the budget for now, though. As long as the existing one (and its durable chair-and-a-half companion piece, not shown) continue to do their jobs of keeping our collective toushies off the floor and are not visibly leaking stuffing or aggressively poking us with springs, we’ll tolerate the barely noticeable central sag in the frame.

We’ve been spending a LOT of time in IKEA this summer for a fun new project which will be announced anon. Part of that project was the rolling out of a beautiful new MARSLEV rug which DID match my vision of a sand and Sea Colour Scheme, but which definitely did NOT match with the red and green cushions. You can see it peeking out under the “before” picture above. A new couch was not part of the project, nor were cushion covers. However, when I was perusing the Ikea website and saw not only that they had cushion covers that would fit both the large back cushions and the smaller cushions, and that they had them in colours that were within the realm of sand and sea AND harmonized with the new MARSLEV rug, I could not resist.

Originally, we were going to replace the red and keep the green to harmonize with the new blue cushions, but it was altogether a bit too cool. Instead, we kept the red for a bit of a PEI sandstone flavour, and covered the large green back cushions with a pair of deep turquoise SANELA cushion covers. We also covered the embarrassingly raggedy smaller throws with a pair of light blue SANELA covers, and kept a hint of green and beige with a contrasting OTTIL cover on the third one.

Whenever dealing with IKEA projects, I build potential exasperation with non-standard measurements into the plan. However, to my delight, each pillow fit snugly and exactly into the cushion covers. They were snug enough that I had to work to get them in, but that tautness makes the pillows look fresh and full.

Voilà, a brand new sand and sea colour scheme (and an end to those awful, threadbare cushions!) 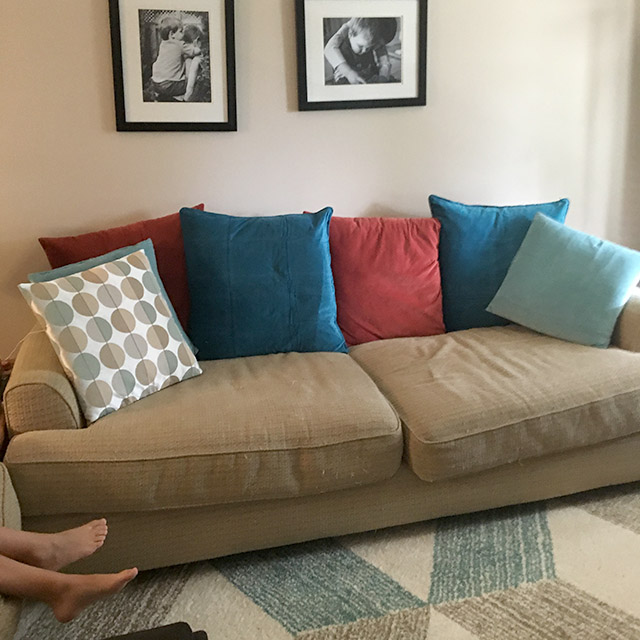 Total project cost: $62 in cushion covers, 10 minutes of effort. I’m so thrilled with the results! We’re now well on our way to that sand and sea colour scheme, AND we’ve averted the need to even consider browsing for new living room furniture for at least a year or so. That’s a huge double win in my books!

To my delight (and, let’s be honest, surprise) the colours pick up beautifully on the re-upholstered IKEA dining room chairs that I fixed up the last time I was feeling crafty. (Hey, I’m half Scottish and half Dutch; if I can extend the life of an existing piece rather than dump it in the landfill and buy more stuff, I’ll do that every single time!)

Stay tuned and I’ll tell you all about my new IKEA project soon!

(By the way, this was not in any way a sponsored post. I have been working with IKEA, but it was simply proximity to their products – and a lifelong love of IKEA – that inspired this instant-renovation.)

Renovation project: a ten-minute update for an eight-year-old sofa