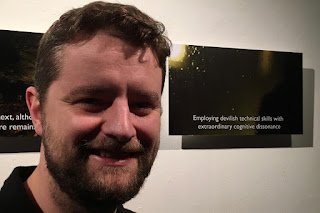 Around 50,000 people participated in last year’s inaugural festival. This year the programme is larger with even more opportunities for young and old to be curious and explore how science affects our everyday lives.

Find out about how your body works, take an exclusive 3D tour of the International Space Station (the festival coordinated local events to mark UK astronaut Tim Peake’s launch and rendezvous with the ISS), discover robotics, explore food security and sustainability, as well as looking at the natural world around us and how art intersects science.

Three organisations – Institute of Physics, British Council and British Science Association – are manoeuvring conferences into orbit around Belfast to coincide with the science festival. The festival’s own programme also includes events in Armagh, Derry and beyond.

Festival director Chris McCreery spoke to me about the 2016 programme [view the print version online] and highlighted some of this year’s top events.

There’s even a ship! AFBI Research Vessel Corystes will be sailing to Belfast and berthing at Titanic Belfast. The Agri-Food and Bioscience Institute’s gangway will be lowered and free booked-in-advance hourly tours between 10am and 4pm on Thursday 18 and Friday 19 February will offer visitors access to the crew and scientists to find out about the work they do.

BBC NI’s Make It Digital exhibition will be popping up with home automation, Raspberry Pis, coding, and lots of hands on demonstrations of the Internet of Things. Belfast City Hall on Thursday 18 February (3pm-9pm) and Friday 19 (10am-7pm) as well as Titanic Quarter on Saturday 20 (10am-6pm). Free.

How To Survive An Apocalypse. A practical session to work in groups to build roads and bridges, design alternative energy systems, build communities in case an asteroid hit the Earth or zombies took over. Costumes are optional (there’s a prize for the best post-apocalyptic survivor.) Saturday 20 February at 3pm, QUB David Keir Building, £3. 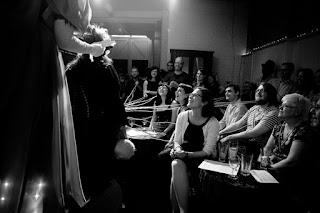 Ada, Ada, Ada is an interactive one woman show by Zoe Philpott about the fist computer programmer Ada Lovelace. You'll be roped into the performance as it explores wearable technology, storytelling and a celebration of the inspirational mathematician. Saturday 20 February in Crescent Arts Centre at 8pm, £10. [Reviewed]

Elephant’s Toothpaste (2pm) and Deaf Scientists of the Past (4pm). Science experiments demonstrated in British Sign Language by Audrey Cameron and Gary Quinn, followed by a BSL-interpreted time machine visiting famous scientists of the past. Sunday 21 February afternoon in W5. Free.

Tenx9’s evening of storytelling will be themed around ‘Back to the Future’. Nine true stories, each no more than ten minutes long, from and about scientists. Sunday 21 February at 7pm in Black Box, Free.

The Luck Factor with psychologist and author Prof Richard Wiseman asks why some people seem to face repeated failure and sadness while others seem to lead happy successful lives? Monday 22 February at 5.30pm in Whitla Hall, Free.

The Wonderful World of Lieven Scheire makes concepts like the Theory of Relativity accessible and hilarious with his non-fiction stand-up. Tuesday 23 February at 8pm in Black Box, £8/£5.

You’ve heard of the Internet of Things and lost the chargers for all those connected devices inhabiting our homes? In this year’s Turing Lecture, Robert Schukai looks at the The Internet of Me and explores “our future in this hyperconnected environment, and how our lives will seamlessly drift into a work-life blur based on a ‘dayflow’ of activity”. Belfast City Hall, Thursday 25 February at 5.30pm, 14+, Free.

Sustainable Gastronomy. The highly acclaimed chefs from the Merchant Hotel will cook up a six course meal that has to use up every last part of local-sourced ingredients. QUB’s Chris Elliott will be on hand to explain the global context of food security, safety and sustainability as the meal progresses. Thursday 25 February at 7.30pm in Merchant Hotel, £38 (includes six course meal).

Exploding Custard and other culinary tricks in Ebrington Square in Derry on Saturday 27 February. Free.

Celestial Voyage in 3D to look out in space, travel through the International Space Station, explore the Solar System and even travel to Mars. Saturday 27 February at 2pm and 4pm in Belfast Black Box, £3.

The World’s Favourite Number and Other Stories from Guardian journalists and author Alex Bellos. Sunday 28 February in The Dark Horse at 1.30pm, £8/£5.

The Strand Cinema’s free educational film clubs will be going techie with four films being screened over the festival weekends: The Matrix, Wall-E, Bladerunner and Jurassic Park.