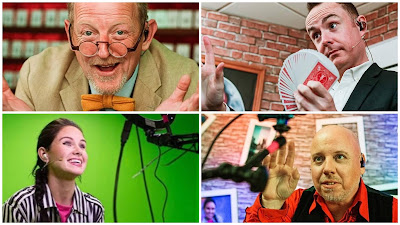 Different Northern Ireland theatre companies have different traits that often pop up in their work. Paul Bosco Mc Eneaney infuses his company’s work with magic, surprises, slick stage management, and a great control of light and sound. And in these socially distanced times, he’s managed not to let go of his secret ingredients to create an experience that goes far beyond what would be expected online through the sometimes tired medium of Zoom.

The University of Wonder and Imagination plays to deliberately small audiences – six remote devices/families at a time – involving everyone in the journey through time and space. The show relies on a variety of close magic, predictions and wonder as we zoom around the underground rooms of the underground teaching bunker, with a feeling of control over our destiny, where we go, and what we do.

What Are Your Worst Grief Triggers ?
Universal Tips on How to Promote Your…
MICRO BUSINESSES
SEO Trends and Vitals for 2021

Sean Kearns inducts every new cohort into the performance, while Lata Sharma floats around Armagh’s Robinson Library (neatly grounding the show for Northern Ireland audiences) and gets us to note down various numbers and shapes for use later on. Then it’s up to magic-fingered mathematically-savvy Caolan McBride to wow us with his numbers, musical astronomer Philippa O’Hara to send us off around the solar system at the speed of light, and Hugh W Brown to finish the show with some pleasant thoughts about a mid-term break somewhere sunny.

The usual approach to online theatre, particularly performances that are aimed at entertaining families and children, is to be incredibly high-energy and include lots of actions. Cahoots NI manage to avoid the need for a sugar rush frenzy, replacing it with intrigue, wonder and amazement. The cast don’t try to be larger than life or shouty. Instead, rich costumes that stand out against the often sometimes physical backdrops (not everything is green screened) help bring the characters to life. And the small numbers in each show mean there’s lots of name-checking and unmuting families to pick numbers and direct the next part of the show.

Looking through a screen undoubtedly takes away from the intimacy of breathing the same air as on-stage performers. The spine-tingling moments of a show like Secrets of Space can’t quite be reproduced over the interwebs. But Cahoots have made a wise decision to go with a bespoke magical variety show rather than one that overly relies on plot. Intelligent choices given the constraints of the medium. Where they stand out from other companies and have created something that can play to homes around the world from their Belfast base is the high production values (acted in a studio environment with good internet and reliable sound, not cast’s bedrooms) and the investment in real-time visual effects (the joins between live and prerecorded segments are pretty seamless unless you know where to look) and Garth McConaghie’s backing track that captures another sense.

Northern Ireland has proved quite pioneering in pushing the innovation cycle in the emerging market for Zoom theatre. With this show, Cahoots take another step up the ladder with something that is very transferable to any English-speaking market, with no flicking between windows or rooms, yet several shows overlapping in behind-the-scenes to get more bums on seats.

The University of Wonder and Imagination is playing this week as part of Belfast International Arts Festival before touring living rooms in Ireland and beyond. Tickets are charged at £20 per screen (which a whole family can sit behind) and there is still some availability. Sit down, relax and be amazed at what is possible which technicians, magicians and actors let their minds run wild with ambition.