Rocks – newcomers impress in a great portrayal of loss, isolation and friendship (QFT until 1 October) 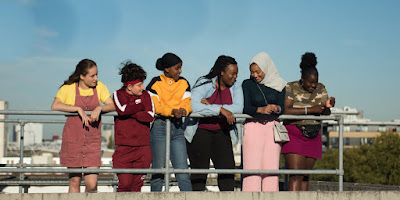 Rocks charts the reactions of an East London teenage girl friendship group as one of their own adjusts to the sudden absence of her mother from their single parent family and the sudden need to take on caring responsibilities for her kid brother.

Bukky Bakray plays Shola, the steely young woman nicknamed ‘Rocks’, who is at the heart of the story. She shows talent as a make-up artist, but at the rate she is burning through schoolfriends after the loss of her Mother, electricity and then the security of her home, the other meaning of make up becomes crucial to her survival. Little Emmanuel (D'angelou Osei Kissiedu) is a loveable, dinosaur-obsessed daydreamer, dragged around along with his class pet, and mostly unaware of the seriousness of their situation.

There’s an authenticity to the dialogue and interactions between the youths that’s explained (in a recorded discussion shown after last night’s QFT screening) by the long months of workshopping and on set improvisation with the impressive ensemble, most of whom are starring in their debut feature. Theresa Ikoko and Claire Wilson’s screenplay has been homed and polished, as has the film’s foundational soundtrack that is ever present yet never in the way.

An early moment dips into the inner-city school’s careers class where anyone with hifalutin aspirations is quickly advised to have a more realistic plan B. Rocks proves that she’s capable and resourceful, even if she makes bad decisions when caught in tight spots. The tension and eventual explosion of anger between Rocks and stalwart best friend Sumaya (Kosar Ali) is really well drawn by director Sarah Gavron, and the sense that Rocks’ problems are in a different league to the issues troubling her friends is subtly underlined throughout the 93-minute film.

The film paints a profound picture of increasing isolation and diminishing hope as Rocks defers seeking help. A school art lesson on cubism and Picasso injects interesting points about identity. After the first few scenes, Rocks’ mother is no longer visible. Yet her presence, or the gap her absence causes, is felt all the way through as we wonder whether she will have even half the support Rocks can muster to work through her mental health problems.

The sharp-tongued multi-cultural gang of girls can cut someone in two with a sharp phrase, yet are fiercely loyal to one of their own as they figure out if and how they can help. Short snippets of mobile phone footage – even some vertical video thrown in, which works surprisingly well given the physical height of the cinema screen – and lots of banter grounds the vibe. Rooftop picnic scenes with vistas over London remind us that this fictional story is happening in real life but mostly not being talked about.

Other films like The Florida Project and Moonlight achieve a level of authenticity, but for a low budget film with a teenage cast, Rocks really delivers a stunning peek into other people’s lives without labouring the point or taking audiences on a guilt-trip.

You can watch Rocks in Queen’s Film Theatre until 1 October.

Rocks – newcomers impress in a great portrayal of loss, isolation and friendship (QFT until 1 October)