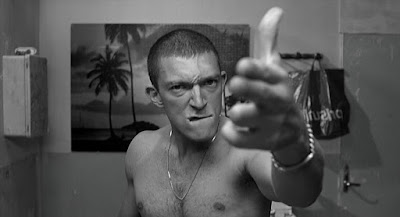 “Hatred breeds hatred” says Hubert, a black boxer played by Hubert Koundé who deals in drugs and warns his friends that not all cops are bad. Vinz (Vincent Cassel) is outwardly aggressive, promising to use a service weapon he found to avenge the death of a man attacked and hospitalised by the police. Saïd (Saïd Taghmaoui) is a Muslim lad, boasting about things he hasn’t done, mildly hot-headed until there is actual conflict at which point he becomes a shy voice of calm.

Written and directed by Mathieu Kassovitz and first released in 1995, La Haine (‘Hate’) spends a day in the life of this almost clueless trio, learning about life in Chanteloup-les-Vignes, a 40 minute rail ride north west from the centre of Paris. The kind of young guys who don’t own up to their farts, pull the ‘your mother’ or ‘your sister’ card to escalate an argument, and can barely hotwire a car never mind drive one. Vinz might be carrying a gun, but would be really ever pull the trigger?

When the film was released in 1995, The Independent reported that the then French Prime Minister Alain Juppe organised a special screening for the cabinet: attendance was mandatory. I wonder was there facilitated discussion afterwards led by residents of the area, or was there just loud tutting and the empty silence of a penny failing to drop? 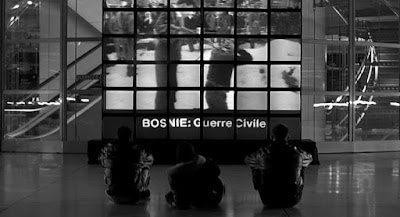 La Haine demonstrates what happens when the state gangs up on a community, labelling everyone as a bad egg, pushing them into economic and housing distress until the pressure escapes and the scale of crime ratchets up towards the top end of the scale. Scenes of rioting, armoured vehicles, communities looting their local shops and burning out their own area. A TV news report of conflict elsewhere in Europe in the background of one scene hints that the story is universal. It’s certainly frighteningly familiar.

The French equivalent of Del Boy (nicknamed ‘Walmart’) lives in a high rise flat full of boxed up electronic goods he can no longer sell after his wheels were torched. At times, there’s almost a comical Trainspotting-esque note to the dialogue. Banal asides and lengthy anecdotes punctuate the group’s constant movement. They generate ‘so what?’ responses from the on-screen characters and the cinema audiences, underscoring the futility of the situation. 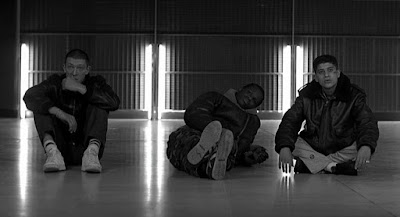 The choice of filming in black and white emphasises just how much colour is at play in this fictional story built around a real incident in 1993. It highlights the greyness of the police. The unusual camera angles hint that Kassovitz wants the audience to look at the situation from novel perspectives to step into the lives of the oppressed and disrespected. There’s no doubt that there’s fault on all sides: but it’s clear why the cycle of violence is being perpetuated.

Twenty-five years on, the anniversary re-release of La Haine stands up to the test of time. It’s visually clever, with a use of slang that must have delighted the subtitlers. Les Misérables is still being screened for another couple of days (until Thursday 17 September) in Queen’s Film Theatre. It’s a like a modern sequel to La Haine, in colour with far more anger, and a lot more focus on the behaviour of the police. Both films peek under the lid of the pressure cooker of community tensions, poor housing, joblessness and disrespect and ask where the power lies, and from where the solution will come.

La Haine finishes its run in the Queen’s Film Theatre on Thursday 24 September. If you enjoyed this review, why not buy me a tea ...