Bill & Ted Face the Music – a better adventure for being less pale, stale and male (UK and Irish cinemas from 16 September) 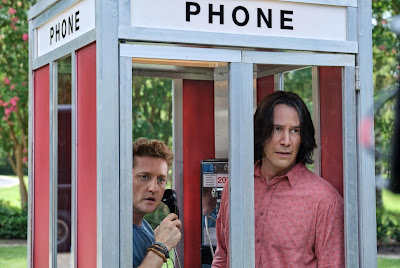 Bumbling bandmates Bill and Ted’s adventures have been occurring since the late 1980s. If you weren’t well through school in 1989 when the first film came out, here’s what you missed.

Bill & Ted’s Excellent Adventure was to blame for school children overusing the words ‘dude’, ‘excellent’ and bodacious. Theodore ‘Ted’ Logan (Keanu Reeves) and William ‘Bill’ Preston (Alex Winter) have been identified as ‘The Great Ones’ by future inhabitants of the world who send Rufus (George Carlin) back to help the teenagers engage in a spot of time travel and counteract the words of the opening song that say “you can’t change the course of your own destiny”. They play historical Pokémon, collecting (white) American and European figures from the past to help them get a much-needed high score in their end-of-year history presentation.

Two years later, the sequel returned to San Dimas, California where a big band contest was on the cards along with a double wedding with two 15th century English brides (who were willing trafficked into the future it that’s ever moral or possible). But neither the Wyld Stallyns band nor love follow a straight path when a couple of automaton imposters get in the way. Bill & Ted’s Bogus Adventure is as grim as the reaper (played by William Sadler in scenes that start out with a very The Seventh Seal feel) who accompanies them on their journey back to modern day life.

So is the threequel bodacious or bogus?

Bill & Ted Face the Music is so much less pale, stale and male. Gone are most of the tonally awful attitudes towards women and sex. Gone too are the youthful zest and naïve ignorance that propelled the energy of at least the first episode. Reeves and Winter play world-weary fathers whose mojo is flagging and who are thoroughly unprepared to take up the latest Eurovision-style challenge to unite the world in song … in 77 minutes time.

But fear not, this is 2020 and women are allowed to think and speak and even act out of their own initiative. For the second time, the princesses/wives have been swapped out, this time for younger models, Erinn Hayes and Jayma Mays. But they do at least get some more screentime.

The stars of the new film are the Great Ones’ daughters Thea (Samara Weaving from last year’s fabulous gorefest Ready or Not) and Billie (Brigette Lundy-Pain) who get to play greatest musicians of all time Pokémon and round up a diverse group of historical figures to play the ultimate anthem to save the world. Lundy-Pain has the mannerisms of teenage Ted off pat while the young pair mimic the talking in unison and finishing each other’s sentences so familiar from the first two incarnations of Bill & Ted. 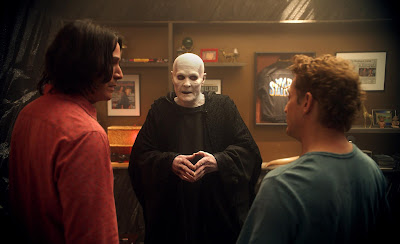 William Sadler is back as the grim Reaper, and there are numerous nods to George Carlin who played the lads’ guide Rufus in the original film and died in 2008. Throw in a persistent and then penitent robot killer and you have a literal bus load of cast to transport to the end of the film. The soundtrack is still heavily influenced by electric guitars, though a lot less metal, and you’d be loath to turn the playlist of this soundtrack up to 11 in the car on the way home from the cinema. and the ending is enormously abrupt, as if they ran out of money or script pages or edit time.

Bill & Ted Face the Music isn’t the most excellent episode in the franchise: that plaudit rests securely with the original. But it’s a big improvement on the second outing, and the more thoughtful scenes – like Bill and Ted meeting their geriatric selves – will please old fans while the two families’ mad time-travelling capers will lift the fatigue of COVID-atrophied cinemagoers. We are in need of a good dose of goofy fluff to distract us from the doom and gloom of living through a pandemic, and Bill & Ted have come to the rescue for one last time.

Already out in the US, Bill & Ted Face the Music will be screened in UK and Irish cinemas from 16 September.

Bill & Ted Face the Music – a better adventure for being less pale, stale and male (UK and Irish cinemas from 16 September)