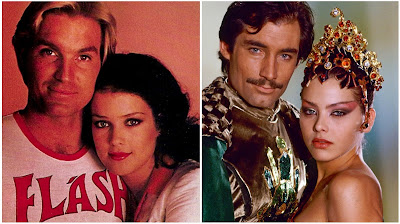 A scared woman clings onto the winsome blonde hero. A mad scientist sleeps in his white coat. And then the action launches into space and through the Imperial Vortex to a set of worlds where conveniently everyone speaks English and important buttons are labelled in English. Welcome to Flash Gordon, an old-fashioned piece of cave dweller science fiction where women show off their midriffs and men engage in hand-to-hand combat all the while the moon drifts towards Earth like a giant wrecking ball. 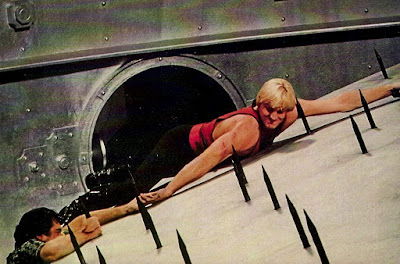 It’s been more than a couple of decades since I watched Flash Gordon on television. I caught the new 4K restoration, 40 years on from the film’s original release, in the Queen’s Film Theatre on Monday evening. While the print has been cleaned up and the special effects are good for their day, Queen’s soundtrack is dated and nearly as disappointing as the gender attitudes that are stuck in the past. The guile and agency of the scantily clad female characters are consistently underestimated by the menfolk throughout the film as Princess Aura (Ornella Mutim playing the sultry emperor’s daughter) and Dale Arden (Melody Anderson as a travel agent who goes on a galactic journey) break free of the expectation that they’ll roll over and be subservient sex slaves. A group of women at the other end of my socially distanced row found their scenes hilarious. But it is the men are ultimately deemed to be the heroes: becoming co-first minister of Mongo was never an option for Dale. 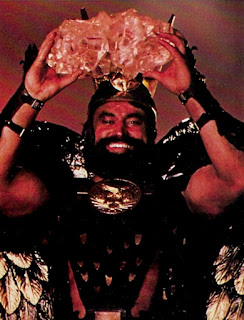 While there’s no doubt that Flash Gordon is a space opera, I do wonder why no one has translated it into an actual sung opera? The botched execution and Flash (Sam J Jones) rising from the dead is perfect plot fodder. The power struggles between colourfully dressed warring factions – hawkmen and tree-dwellers in scenes that could have been straight out of The Wizard of Oz – would work well. Then there’s the contest between Flash Gordon and Prince Barin (Timothy Dalton) on a tilting platform with retractable spikes that is straight out of the Gladiators TV show. The ambitious, bald, big eyebrowed emperor Ming the Merciless (played by Max von Sydow) is could have started in Turandot. Brian Blessed’s Prince Vultan could become a baritone jester. And there’s even a curtain call at the end. Though on second thoughts, Gordon’s jet ski escape from the floating Disney castle planet is perhaps more worthy of a Bond film stunt than inclusion in an opera.

While the influence of Flash Gordon on George Lucas’ Star Wars (he seems to have tried to licence Flash to make a film in the 1970s) is undeniable, the cult status the movie attracts is hard to justify in 2020.The first half hour is nearly fun; the next 80 minutes stretch any accumulated charm tiresomely thin, no matter how beautifully the Blu-ray edition is rendered. Five years later Mike Hodges would go on to direct Morons from Outer Space. The lure of Smith and Jones seemingly convinced my parents to make a rare family visit in 1985 to the cinema to see it: I wonder has it aged any better?