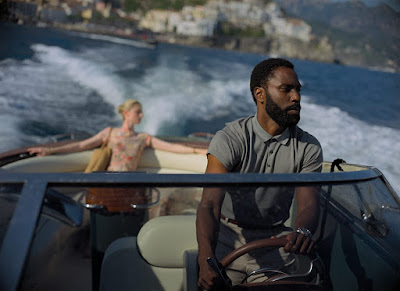 Right from the start, Christopher Nolan demonstrates his mastery of cinema to create a big screen experience. Releasing a film roughly every three years, Tenet ticks many of the boxes you’d expect for a film from Nolan: complex timelines that will reveal more upon repeat viewing; extraordinary set piece fight scenes and chase sequences; sets that defy normal cinematic scale and budgets; a musical score that is particularly fine-tuned to the on-screen action (in this case, with some instruments being played in reverse and in the hands of Ludwig Göransson rather than regular Nolan collaborator Hans Zimmer); and demonstrations of the fog of war.

It would be difficult to supply a large enough spoiler to ruin your enjoyment of Tenet. Central to the film is the notion of inverted entropy that (roughly translated) means some objects and people seem to be travelling backwards in time from the future and posing a greater threat to civilisation that a potential nuclear holocaust. As one character explains in a somewhat clunky piece of narration: “Don't try to understand it. Feel it.”

The action falls into five half hour chunks. We’re quickly introduced to the nameless ‘protagonist’ played by John David Washington who handles the action sequences with gusto though is made to deliver witty oneliners that are totally at odds with the character and the mood of those scenes.

Tenet will hardly pass the Bechdel Test. The second of only two significant female characters appears after 30 minutes. Elizabeth Debicki (playing Kat) brings emotion and elegance to a film that is otherwise packed with muscle and mental gymnastics. On the hour, Kenneth Branagh turns up as her controlling and abusive husband, a Russian oligarch who is in cahoots with a future force keen to upset the current world order. 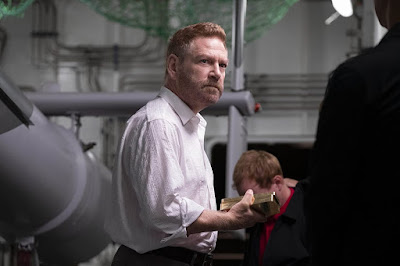 Ninety minutes in and Tenet would pass for a great Bourne film, albeit with extra time travel seasoning. However, Nolan wants more, and chapter four lays on thick lashings of scientific explanation that widen the audience’s appreciation as we finally occupy the inverted world and of setting up the bewildering closing action sequence that will have fans of the film drawing diagrams and fighting over timeline explanations for months to come. But rest assured, other than this final act of cinematic brinkmanship, the plot isn’t as exhausting to follow as Inception, and you’ll pick up some clues to later revelations along the way.

Tenet revels in obscurity. Much of the opening dialogue is muffled by background noise. I longer for subtitles at various points during the movie. Your chest will tighten as one of the loudest, bassiest and most claustrophobic soundscapes I’ve endured booms out from the surround sound system, and is well worth the trip to the cinema. The element of time travel obfuscates the plot: even after a five-minute on-screen briefing of what will follow, the final action scene is a bewildering synthesis of red and blue teams attacking the same nuclear storage facility in different temporal directions. Sometimes focus is pulled to muddy details that as a cinemagoer you think you should be taking in and analysing. And several characters are set up with lingering shots that cast doubt on their loyalty only to be totally absent from the big reveal at the end.

Rest assured, Nolan is a master storyteller. Dunkirk is his magnum opus in terms of scale. Memento is probably the most accessible of his timeline-defying stories, Inception the most contorted. Tenet combines what he has learned over 30+ years of filmmaking to create a headmelter of a movie that dreams big and then delivers. Every chapter of the film contains novel stunts and situations. The catamarans are sleek, the jumbo jet is real! The globetrotting – Kiev, Oslo, Mumbai, Italy and more are visited – is more logical and joined up than a Bond film.

Overall Tenet is a superb way to show off Christopher Nolan’s talent. The complexity means you have to engage your brain to keep up, thus Tenet can’t merely be judged as mindless entertainment. Still, it sets the bar impossibly high for No Time To Die which is now slated for release in November. But in a sense, Tenet is competing in a higher league. It’s trying to be art. And while the ambition and the sense of scale is there, the clever story perhaps disguises the areas in which the director has room for improvement.

Ultimately, the narrative device – a Mum driven to save her barely seen child while everyone else strives to save the world – doesn’t quite work and the film consequently lacks a sense of humanity. How many more films do we need to remind us of man’s inhumanity to man. And why so very male? Could future Nolan not reach through a wormhole in three years’ time and produce something of equal technical brilliance but substantially more thoughtful, more diverse and less reliant on a plot device that he has truly conquered? Only time will tell.

Tenet is released in UK and Irish cinemas on Wednesday 26 August before its US release on 3 September. Locally, it’s in Queen’s Film Theatre, Movie House, Omniplex, Odeon, Strand Arts Centre and more. If you enjoyed this review, why not buy me a tea ...