Bathroom – the parable of the claustrophobic circus comedy performers #bff19 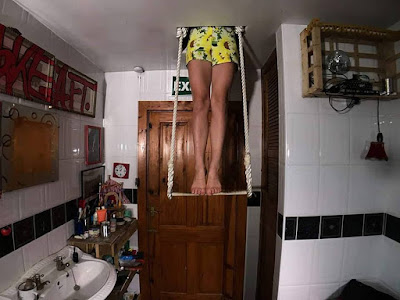 Following ‘the Situation’, two circus artists Regina and Ronald are trapped for their own protection, living in their upstairs bathroom, locked into a cycle of performing routines and recording them to satisfy the gas mask-wearing visitor Slav from the Council who also provides food to hoist up in a bucket.

As Bathroom unfolds, the audience discover that the novelty of snuggling up on a mattress perched on slats over the bath, cooking on a stove, and storing milk in the shower, is wearing thin. As the weeks turn into months and the agile couple’s first anniversary of incarceration is celebrated, the strains of tiny house living become more and more apparent. 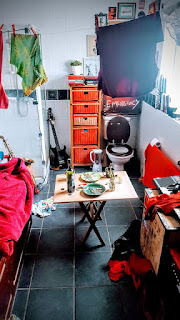 Angelique Ross and Ken Fanning play the angsty and creative Regina and Ronald. A lot of tricks and routines, and even a spot of trapeze work, are crammed into the performance space. A lot of bodies are squeezed into the bath and shower. The physical comedy demonstrates the performers’ strength and control.

While Fanning keeps the inventive yet ultimately risk-averse Ronald following the rules, Ross plays Regina as a somewhat sex-starved self-starter who sees beyond the somewhat artificial boundaries of their confinement and longs to test just how dangerous the hunting Prototypes are. 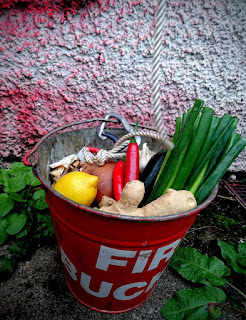 Fanning claims that the script was devised after the couple endured a week-long residency in the very same bathroom. The single location is certainly built to generous East Belfast standards, though that still means that cinematographer Neil Hainsworth shot a lot of it standing in the bathtub with a light attached to his head. Each scene is a video diary of a day, though some end rather too abruptly.

The opening soundtrack features an unusual yet fitting clarinet and double bass duet, and woodwind instruments feature throughout the 90-minute film which includes a joyous song about overfishing.

Away from the dystopian set-up, Bathroom is a metaphor for the manner in which artists trap themselves against the increasing demands of their decreasingly generous funders, finding themselves forced into producing greater quantities of less creative and rewarding work, often selling out in order to survive. The ‘Council’ could be the Arts Council or any number of other funding bodies. The artists could be extended beyond circus to stretch across the breadth of the arts. 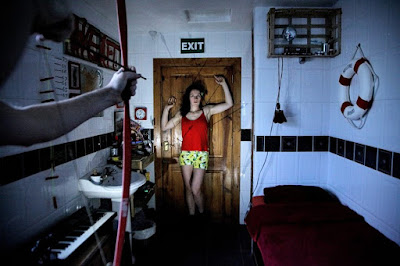 Bathroom is a celebration of circus and proves that the art-form can succeed as effectively under a hot tap as a under a big top. Its light-hearted, unpretentious visualisation of circus mentality is very entertaining, and its allegory overcomes any looseness in the plot.

Shown in the Movie House Dublin Road as part of the 2019 Belfast Film Festival, keep an eye on the film’s Facebook page to hear about future screenings.

Bathroom – the parable of the claustrophobic circus comedy performers #bff19