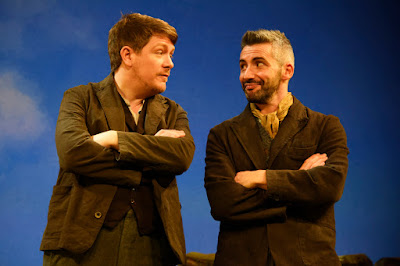 On the twentieth anniversary of its West End Run – which I used to regularly walk past while working in London and heading back towards Leicester Square and my hotel near Trafalgar Square – Theatre Royal Bath and Rose Theatre Kingston have revived Marie Jones’ play Stones In His Pockets and have taken it on a 14-week UK tour.

Ostensibly about the experience of two local extras employed to fill out the crowd scenes of a US blockbuster being filmed in County Kerry, the play homes in on the perennial exploitation of the little people by the rich and powerful blow-ins who fill our heads with unreachable dreams. 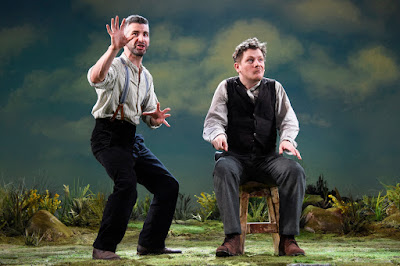 Yet the play is in the Grand Opera House in the week that the last season of Game of Thrones begins and opens on the very day (and I borrow phrase from one of many press releases issued on the subject) that the first of six beautifully crafted, freestanding stained-glass windows that are being installed across Belfast each depicting some of the most exciting and talked-about moments from the saga.

We have adapted. We have learned to collude with the magic picture makers. We have learned to ever-so-slightly exploit the filmmaking overlords and play them at their own publicity game. While the tables haven’t completely turned, the cards are no longer stacked against us with the house being able to automatically take advantage. 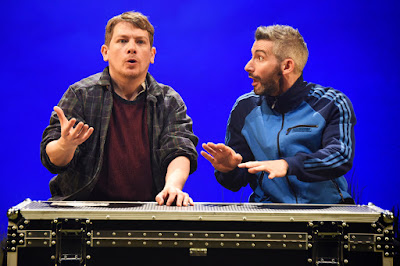 So while a mention of ‘virtual reality’ indicates that Marie Jones has tweaked the script – though I’m glad to say ‘Commodore 64’ survives! – the words of Charlie and Jake have a certain dissonance reflecting how far we’ve come, rather than a relevance to our current situation.

The step and twirl choreographed transitions between characters – the pair of actors play a total of 15 people between them – are amongst the most stylish in a recent run of multi-roled productions. The Riverdance sequence deserves the laughter and applause it generates.

Kevin Trainor plays Charlie who has turned his back on an Xtravision franchise and a failed relationship in Ballycastle to travel south and try something new. While the accent is more Glens than Fair Head, it’s consistent and likeable. Owen Sharpe plays the wiry Jake, a local Kerry-man who is a second cousin to nearly everyone in the town that has gone mad for Hollywood. His dalliance with the film’s lead actress Caroline Giovanni turns out to be as phony as her accent. Trainor’s Jock Campbell, Scottish personal security to the film’s lead is a favourite from the minor roles, along with Sharpe’s overly eager to impress, mincing assistant director Aisling. 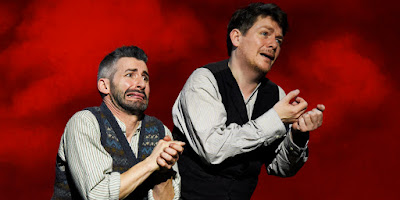 Lindsay Posner directed last year’s production of Dear Arabella as part of Belfast International Arts Festival and is familiar with the quality and fluency of Jones’ writing. However in Stones, the rapid pace of delivery leaves very little space for the wordy script to breath, and the emotion of the tragic moment before the interval and Charlie’s own revelation in the second half are senselessly lost.

Stones In His Pockets continues at the Grand Opera House until Saturday 20 April. While some of the script’s observations have dated, it’s a great opportunity to be reminded how far good writing and a simple set can take a play. And while we may not be taken in by the charms of the Yanks, it’s a chance to evaluate where else we allow ourselves to become victims of other people’s dreams and ambitions.