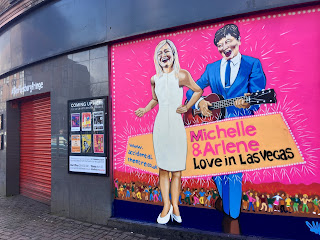 Rosemary Jenkinson embraced rapid reaction plays last year with a series of productions which were written, rehearsed and staged within weeks rather than the normal process of months and years.

Michelle & Arlene: Love in Las Vegas is the third instalment of satirical adventures of the former First and deputy First Ministers as they seek to find political agreement. (And Arlene met Trump at Christmas too.) The fine foemance have previously spent time in Ibiza and travelling through Europe, but you don’t need to have seen the previous episodes to pick up the story.

The first show was quite a risk as it relied on the NI Executive remaining out of action. The possibility that the institutions could be restored could have jeopardised the short run: this year, that risk doesn’t seem so real. Instead it’s nearly as if there’s a war of attrition between the satirising playwright and the political parties: one continuing to tease the others while they remain reluctant to find agreement and restoration.

“This one particularly has got more anger in it because of the arts cuts” says Rosemary. “During the Good Friday Agreement events, Arlene Foster tweeted about her pride in the building works going on across the city. It’s like she thinks that a country’s worth is valued by its themed hotels or whatever. A country’s worth is valued by its art and culture and that ignorance infuriates me. So there’s a little more bite to this one.”

Wide ranging discussion with President Clinton in Belfast this afternoon. Discussing events 20 years ago, what we still need to do and our hopes for the future. Sharing our pride in NI as we looked out at the building work ongoing in the City Centre. #proudofNI pic.twitter.com/oC50CNroei

How To Grow Spiritually
Goal 2020 review and 2021 Resolution
Per Annum Pocket Diaries
Sex on Your Period – Reasons to Do It
L1 Visa Approved for Aircraft Enginee…
— Arlene Foster (@DUPleader) April 10, 2018

This show is inspired by the recent political remembering. Michelle O’Neill and Arlene Foster have agreed to lose their party colleagues and advisors and travel alone to the US to have intensive talks. But as usual, one thing leads to another, and they end up in Las Vegas with hilarious consequences.

“Politicians love an American junket! In the play it’s a metaphor for the way that internationalism pulls you into looking outside yourself. Distance helps people come to an agreement. If they actually did go to America it would probably be a very good thing to get the blinkers off. Inside our country we’re so caught up in our green and orange dynamic that you need to go outside and see the big picture of what we’re not doing.”

Common to all three plays is the ability for the two political leaders to work together, particular when their backs are up against the wall and they need to rely on each other.

“My sense is that they like each other … and can do deals. It’s almost as if their parties pull back their individual desires to do business. Hence the need to take them away on their own [in the plays].”

Unless – or until – there is political progress, Rosemary says that she’s unlikely to write a fourth instalment.

“I’m not going to keep on lampooning the same things just because they are out. I need them to engage more politically to have real life material to bounce off.”

Writing about contemporary politics is a joy.

“It’s great doing political work because it’s constantly feeding you. With the ongoing RHI inquiry, I’m constantly having to do rewrites. It’s quite exciting for me to be under that pressure to reflect society, something that wouldn’t happen in a normal play. It keeps me on my toes which I love.”

Is the motivation around embarrassment, education or entertainment?

“My ethos is that it’s a light, entertaining play. The satire in it doesn’t beat you over the head. It’s deliciously barbed and takes up Oscar Wilde’s notion of ‘a trivial comedy for serious people’. So the intentions are entirely serious, but the view of it is to be incredibly funny and a great night’s entertainment. It’s not throw away like a review sketch night. It is a properly built play with a journey that will entertain people.”

While the two political figures at the centre of the drama might find the material rude, pass remarkable, and even insulting, Rosemary says that the jokes and barbs are based on real comments and reporting. Previous plays picked up on Arlene Foster’s comments in an interview when she described Michelle O’Neill as “blonde” and “attractive”.

“A lot of that stuff stems from truthful words. I don’t put things in that really don’t have a basis in reality. Something sparks it off [and] it’s not just me deciding to have a little stereotypical joke here.”

Maria Connolly and Mary-Frances Doherty have played Arlene and Michelle in all three shows. The first was written before anyone was cast. But since then the playwright has been able to craft the text around the actors present each character.

“When I write for them I know where I’m going to put particular little mannerisms and verbal ticks. It’s heightened Arlene’s disapproving mannerisms in the way that Maria picked up on them. Mary-Frances laughed a lot as Michelle. And Maria loves singing, so I’ve put in more songs.”

While Maria would love a Michelle & Arlene musical, this third show is a good compromise, with the characters travelling to Las Vegas.

She loves the liberation of the rapid response format and the flexibility of the Accidental Theatre space. “I can phone Richard Laverty and just like that we can take off any time. There’s no other director who would put shows up so quickly. It’s incredibly stressful on the actors and on the director. They do it because they love it but it’s still very difficult to do.”

The lack of set, minimal props, very simple lighting, lack of radio mics does remove a lot of the complexity of modern theatre. I wonder whether it’s a little like Shakespeare in the Globe Theatre with people sitting around the stage, up close as the actors do their thing, work off the audience and ruthlessly send up what the playwright sees and finds annoying?

“I like that comparison because there is a rawness and the actors are exposed. I know both Maria and Mary-Frances absolutely love it because it feels more live and more exciting that close to the audience with nothing for them to hide behind or rely on. They really respond to that basic visceral theatre.” 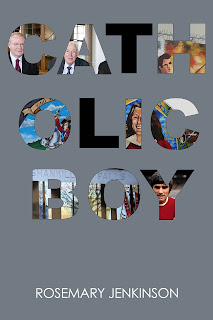 With Brexit and referenda never far from the news, there are plenty of topics that Rosemary could dip into for future work. But in the meantime, her next book of short stories Catholic Boy will be launched tonight in the Lyric Theatre. A sample story Revival that references Alex Higgins can be downloaded on Amazon.  (Aphrodite's Kiss was published two years ago and is still in print.)

2018 has started strongly for Rosemary Jenkinson. May The Road Rise Up (reviewed) has just finished its NI tour with C21 Theatre, and Lives in Translation (reviewed) which premièred at Belfast International Arts Festival also went back out on the road with Kabosh.

“It’s great to finally get another book out. It’s such a different world, from theatre: more sedate and civilised. With a play you’re always thinking of the audience and the actors and making it easy for them in some ways – or sometimes more difficult – but you’re thinking of other people. I love that it’s just me and the page with short stories: I don’t have to worry about pleasing people ... except the editor!”

Though with a book tour to do, the playwright does have to step out onto the stage for once as a writer and perform readings and answer questions. That’s a reversal of roles?

Rosemary laughs. “I do edit the stories [when I’m reading them out]. If there’s a passage that’s maybe too descriptive it will go because I understand the nature of performing. My only problem is that I’m never confident enough to put on accents for the dialogue! I’m not an actor. I can read but for acting you need total confidence and self-abandonment and I don’t have that. But I might improve …”

Tickets are now on sale for performances of Michelle & Arlene: Love in Las Vegas at 8pm on Thursday 10 to Saturday 12 May in Accidental Theatre’s latest home at 12-13 Shaftesbury Square, right under the big screen.