Where to begin with Maze Runner: The Death Cure? Probably not by starting to watch the third and potentially final part of a trilogy of films based on a successful series of books. So consider this a review from the less-than-ideal-but-not-uncommon perspective of not having read any of the four books or seen the first two films in the franchise.

A rattling buggy like something out of Mad Max races across the wasteland to catch up with a train. The rebel forces are pulling off a plan that is both audacious and ambitious to liberate a secure carriage full of prisoners from the WCKD enemy. With unbelievable accuracy the mercenary teens (mostly young guys who neither pause to shave nor have beards) halt a portion of the train right opposite some friendly forces, capture a transporter plane kitted out with lethal weapons (but no remote destruct function) and discover that the lad they want is not on board.

"They took you because you're immune to a plague that's wiping out the human race."

The dialogue is stilted and heavy with cues. The line "I didn't think there were any cities left …" is interrupted by stringed music. And so begins a quest to travel to the well-fortified 'last city' (described as "the lion's den" by a character last seen spouting delusional melodrama in The 100), break in, find their friend, become distracted by an old flame, and "start over".

There's an allusion to the 'maze' in the film's title in the medical induced hallucinations of a tortured child. Otherwise, the only maze seems to be the one the plot is trapped in searching for the film's end. 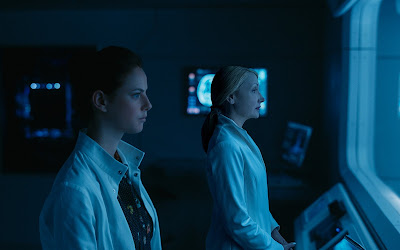 I'd love to be able to say that this dystopian English-speaking future world had loosen the grasp of gender-specific roles, but sadly while Patricia Clarkson plays Ava, the WCKD leader who is searching for a cure to the disease that is becoming ever more virulent, it is clear that she's a puppet of a figure head, backed by a male bully.

Bad boy Aiden Gillen plays the security fore leader Janson (seemingly reprising his violent role from RTE's Love/Hate). Compared with everyone else in the city who sport natty suits and ties, he is curiously under-dressed in his black leather jacket and none of the body armour that adorns his troops.

Brenda (Rosa Salazar) accompanies the young lads on their adventure, and while she does some sharp shooting early on, her talents are ignored and she's eventually left behind to drive a bus full of children while her testosterone-fuelled mates do the fancy stuff.

In this smorgasbord of familiar figures, it's great to see that while Effy from Skins still juggles complex morals, she has grown up into a more stable scientist and carries an emotional connection to one of the rebel gang that nudges her towards a path of good(ish) rather than pure evil.

While Thomas (Dylan O'Brien) is clearly not in charge of the immune rebels, he's has a 'saviour complex' and is the self-appointed leader of the breakaway group who embark on the pilgrimage to the last city, complete with antique map.

The soundtrack - which could have included Two Little Boys - is generally drowned out by the action. Though such sentimentality wasn't needed to trigger wales of crying from elsewhere in the cinema screen when a couple of (I assume) much-loved characters didn't make it alive to the final credits. 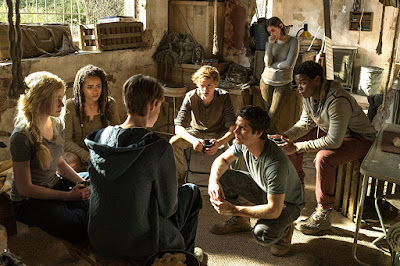 Every now and again The Death Cure throws up a surprise. After waiting for ages to discover how the crane would fit into (what seemed at the time like) the final escape act, it delivered a brief but novel lift to the long-winded plot. And the "Out Of Service" joke was inspired even though totally out of character with the rest of the film.

With an overly-long duration aided and abetted by a series of self-indulgent endings (which hopefully signify that this is definitely the end of the franchise), The Death Cure is a poor cousin to the more nuanced and appealing Hunger Games series. While it's a better teen adventure than IT, if you hazard a trip out of your hermetically sealed house into a plague-ridden city to see this film, you'll witness a mishmash of Mad Max with zombies from Raw, action which reminded me of War for the Planet of the Apes and Logan along with a cityscape borrowed from Bladerunner 2049.

Maze Runner: The Death Cure is an overly long yet timely essay on the danger of relying on walls to keep people (and the plague they may carry) out of a territory. It's also a lesson about why children need adults to back them up when they rush into danger (in this case, an invasion with no plan beyond drive east and run out of ammunition).