As I went to bed on Saturday evening, the radio news bulletin announced the tragic news that over 30 migrants including children had died off the coast of Libya when their boat capsized. The Libyan coastguard had rescued around 60 people from the water and another 140 people in a second boat.

According to IOM figures, nearly 3,000 people are believed to have drowned while attempting to cross the Mediterranean so far this year, and the UN report that at least 33,761 people are reported to have died or gone missing between 2000 and 2017.

I had just returned home from a staggering sold-out performance of This Beach in Belfast’s Lyric Theatre. 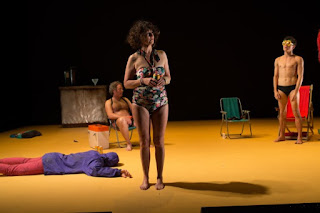 The dark satire takes place on a sandy section of beach that has passed through the one family from generation to generation. Sabine Dargen’s simple set is littered with deck chairs, booze and a parasol for shade. When bodies float ashore, the residents incinerate them as a matter of routine. When a young man (Neimhin Robinson) revives as they prepare to drag him away, something stops them, and he is allowed to live.

The beach is a metaphor for a country; the family, its citizens (underscored by the characters taking the first names of the actors). The play by acclaimed Irish theatre company Brokentalkers examines the thought processes that lead to excessive nationalism and defensive actions which dehumanise the ‘other’.

The eighty minute long drama examines abuse, entitlement, ignorance, racism, misinformation and above all else, fear. The effect of smallminded thinking is physically demonstrated as the protagonists deny that their actions are causing the beach area to shrink. History’s continuing effect on the present is beautifully observed as the father figure Daniel (Daniel Reardon) excavates the beach for objects of significance, yet applies none of his learning to his own attitudes.

His son Bryan (Bryan Quinn) has a profound sense of entitlement, brusquely shrugging off other people’s defiance until his own weak spot is unearthed. His friend Anthony (Anthony Morris), an old comrade in arms, has no sense that the family’s ways are unorthodox, playing along with whatever’s needed to keep the beach tidy.

One character, a young woman Venetia (played by Venetia Bowe), is marrying into the beach-owning family. She’s a filmmaker and video artist. Having captured the nameless young lad’s story she retells it, twisting it into her own dramatic form, stealing its authenticity and exploiting the giver of the story. A challenge for those of us who report about migration, http://focusonrefugees.org and an aspect of the play that has its roots in the response of refugees in a camp outside Berlin to a visit by the playwrights Feidlim Cannon and Gary Keegan. In an interview with the Irish News, Keegan explained:

“The refugees were quite upfront with us in the fact they weren’t really interested in the likes of us white European, somewhat privileged artists, coming in and cherry-picking their horrendous experiences.” 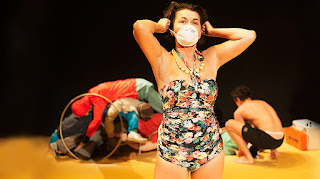 Venetia’s mother (Pom Boyd) is the outsider. At first she protests against the deeply engrained behaviour she witnesses. However her compassion towards the nameless ‘boy’ who is found alive on the beach quickly takes a sinister twist. Over half an hour the exchanges go something like this:

There is a danger that even those of us who value the lives of refugees and asylum seekers can end up ignoring their true needs, or helping them in a manner than feeds us more than supports them.

As the characters strip down to their beachwear, they also discard the masks and filters that sanitised their conversations at the start of the play. We see the real people. It’s just one more aspect of the incredibly well crafted production that packs so much into its one act performance.

While the language is salty, the production is stinging as it holds up its mirror to European attitudes and behaviours. The script is punchy, full of the phrases and sentiment that is bandied around in everyday conversation as well as the language of newspaper headlines. Everyone in the audience will find parts of themselves represented in one or more of the six characters on stage.

Co-written and co-directed by Feidlim Cannon and Gary Keegan, and shaped by dramaturg Bjarni Johnsson, This Beach is a superb piece of contemporary theatre, packed full of challenges and biting commentary. Combining the script, set, acting and effects, This Beach is one of the most brilliant pieces of theatre I’ve seen this year. If you’re in Cork or Bray next week, don’t miss the last few performances of its Irish tour.

This Beach is in The Everyman in Cork (Monday 27-Wednesday 29 November) and the Mermaid Arts Centre in Bray (Friday 1 December).