Sinnead: a rap-turous audience with the Irish pop sensation 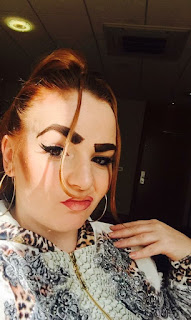 Over the last couple of year’s I’ve watched the character of Sinnead develop, through a scratch session at Accidental Theatre and then putting in a percussive appearance at Pony Panto in 2015.

However, performing Sinnead: One night only … for two nights on the MAC’s big downstairs stage has put the wannabe pop star’s name in bright lights and may have swollen her head (and other parts) to a no doubt hard to manage size. Pregnancy hasn’t slowed down this artist.

The no interval confessional show introduced adoring fans and new audiences to the origin story of how the Irish singing sensation Sinnead (pronounced ‘Sin-ne-ad’) came to live in Belfast.

There’s plenty of devil in the detail of this show. The props were ridiculous, yet filled with fun and unpredictability whether a bin full of audience questions or a bicycle. At times, Sinnead was deeply irritating. Her diction was hard to app-re-she-ate. Her eyebrows looked like slugs. She surely scored low in any Insight exam at Leaving Cert. Yet Paula O’Reilly has filled out and rounded a fascinating creation to work up this extended show. 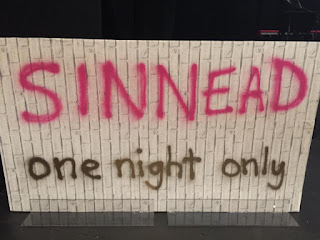 A chavtastic track-suited band led by Donal Scullion provided the rich musical soundtrack for Paula O’Reilly and her two deliberately sullen backing dancers. Surprises abound with even the a couple of brass players being introduced with great theatre. Guests pop on stage and threaten to overshadow the star-billed phenomenon.

Keith Singleton is O’Reilly’s real life partner. His on-stage appearance as Decky complete with a broad Belfast accent was a revelation. The people’s pop princess is at her strongest when rapping new parody lyrics over old familiar tunes (and rhyming ‘ordinary’ with ‘strawberry’). Dissonance abounds when she flips over to sing the melody.

There’s something of the Ronnie Corbett to Sinnead’s style of elongated storytelling, with fewer off-topic diversions, but always with a fabulous last line to pay off at the end. The Beyoncé story would make a great parody YouTube video.

The show finishes on a high with a new anthem for Andytown and the audience escape before any more people are singled out for special attention from the sharp-tongued minx. Paula O’Reilly’s alter ego has definitely grown in confidence.

If good things come in small packages, then the challenge for Paula O’Reilly is harvest her fertile imagination and develop some more comedy characters to sit alongside (but never replace) Sinnead.

Sinnead: a rap-turous audience with the Irish pop sensation