Good morning.
Craig got a call from his doctor about the results of his x-ray.
There were no obvious issues with the bones, so he believes it's probably  Dupuytren's contracture. 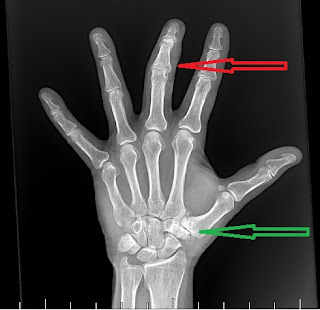 Dupuytren’s Contracture
So, I pulled out the CD he got to take to the surgeon and popped it in the puter to take a look.....
I added the red and green arrow. The red arrow shows the finger affected. He's being referred to an Orthopedic surgeon for clarification and possible treatment. But he did tell Craig that the base of his thumb is full of arthritis. Look at the end of the green arrow. The whitish looking area where the bones meet is the arthritis. Craig figured he had arthritis because he had the same symptoms as another stylist that was diagnosed with the same thing. But interestingly, it hasn't bothered him since we moved out here. Apparently arthritis is bothered by wet cold weather. We have little of either here.   :-)
And, more drama on his prescription......
You remember, he went to the doctor last Thursday and had a script called in. Went to pick it up on Sat. and was tablets instead of capsules, and $118 instead of $5.50. Went back to the doctors office first thing Monday to straighten things out. They were to call in a new script right away.  Went to pick it up again on Tuesday, and they had no order.  But they were nice enough to call the office and eventually got it. What a hassle!
But anyway, he's got his pills and back home we went for a nice long walk. Then I decided to wash his car.
Oh, and he got a call from the insurance company about the car. They are going to wave the deductible on the repairs. So that was good news!
This morning we're heading back to IKEA on the south side of the valley to pick up a few things, then meeting some friends down there from Palm Springs for lunch. They came up to Vegas in their coach for a week and staying at a motor coach resort on the south side. Will be nice catching up with them.
And that's it for now....