Arisaig - to the last hard move 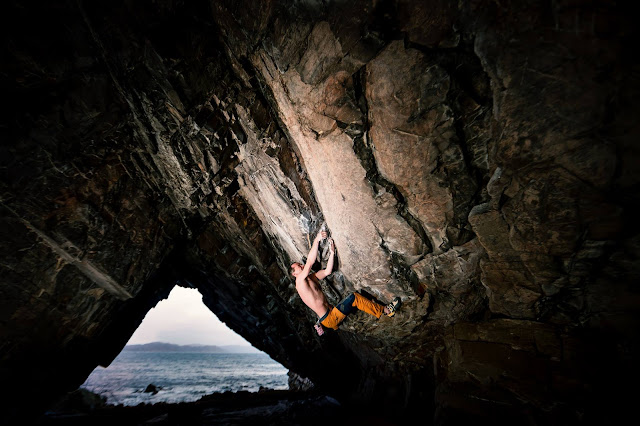 Get the Left hand squeezed a few mm to the left, and the move works! Photo: Chris Prescott/Dark Sky Media
Two days on my project in the cave this week, in the company of Chris Prescott, Natalie Berry and Kevin Woods. On the first day it was still a bit warm and I was feeling pathetic on the climb. I was full of thoughts and chat about sacking it for the season. Maybe it has to be mid-winter for this project?
An hour later, a couple of blasts of wind came soon before my second redpoint of the day, and next thing I got three moves further. Maybe I should not be so hasty to call it. After a rest day we were back, with a cold front having passed over. Yet the day started off very badly and still I struggled.
There are a couple of themes I have noticed in the cave. I always seem to do better on this project late in the session, when my skin is getting thin. I’m not certain why. It may be something to do with the smooth rock. It gets a bit ‘glassy’ if skin is too thick. Also, I’m noticing I consistently have good attempts just before dusk, when of course the temperature is dropping. It could be both factors working together.
I went back to my sequence and wrestled with one adjustment move for over an hour. Finally I sussed what I was doing wrong - getting a weird undercut-wrap hold a finger width too far right. I still wasn’t feeling like there was really much point in a redpoint. But I rested and prepped anyway. And began. The first part to the kneebar was not bad (but not as error-free as I’ve done it). I felt quite rested on the knee bar. As much as you can be while hanging upside down trying to breath as lightly as you can without sliding out and landing on yer heid.
But despite a fluffed move on the opening moves of 4th Wave I found myself beyond my highpoint and feeling like I still had some power. So I used it! I did not intend to do so, but spontaneously had a power-scream match with the crux that Adam Ondra would be proud of. I momentarily had that weird floaty feeling where it just seemed to be happening by itself. I threw for the final hard move, Held it, cut loose, held on but then started to drop. If I’d held on long enough to get my feet back on, I’d very likely have done it. But I didn’t. I cannot decide if in that split second I truly held on to the last, or if I might have decided a few milliseconds too early that I was off. It doesn’t matter much now anyway, except that I know what I need to do if I get back to that move again.
Better keep trying now!

My book - 9 out of 10 climbers make the same mistakes

Arisaig - to the last hard move