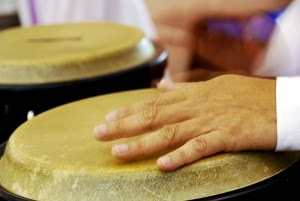 I'm totally digging my music therapy classes. They are personally insightful, professionally needed, and just plain fun. In my Music Therapy Ensemble class this semester, we were assigned to to some solo improvisation on a few instruments that we were drawn to, and with our voice. We were asked to be spontaneous, coming up with whatever we wanted (non-referential improvisation) and to try and improvise in the "style" of some emotion, such as joy, love, or anger. We were also tasked with picking an instrument that reflected our true selves, and one that reflected our ideal selves, and improvise on that. We reported the experience in a reflection paper. Here's mine.

Individual Improvisation Exploration
Improvisation has been a long time coming for me. It has surprised me, frustrated me, and at times let me touch the sublime. It has also let me connect with others, gaining understand I might not have otherwise had. It has given me insight into myself.

Jam.GG – Play Retro Games online with…
Crip Mac Ft Toodah Da Shoota Ft Toppy…
Do humans matter? Do you think you re…
Theatre Tickets Direct – Frozen The M…
Artifact Games…..What in the World is…
Personal Experiences with Improvisation
Being comfortable and competent when improvising is certainly a goal of mine. Before coming to school, I got quite comfortable improvising on the trumpet. I played with a quartet and it was part and parcel of the gig. I never translated that expertise to other Instruments, however. Until now, I never tried improvising on percussion instruments. In a group, however, with someone else's riffs to build on, I feel safe and inspired. I hear their Playing and get lost in the shared creation, trading riffs and taking turns being “in front.” The level of communication is amazing, given that it is entirely non-verbal.
Improvising alone is another matter. This may be due to the fact that alone, I usually play a pitched instrument. They seem to demand melodies and harmonies from me. Drums, on the other hand, make no such demands. Instead, they allow me to let go of that and play with rhythm, accents, dynamics, meter, tempo and groove.
Still, playing together can sometimes have a downside. I discovered this when my daughter came in and spontaneously started playing the drums with me. I enjoy making Music with my kids, and we don't do it often enough, so I didn't stop her. When I was ready to end, but she was not, it got frustrating, though. Her playing spoke to me about her as much as her daily activities did. It was annoying, enlightening, and fun all at the same time.
Referential vs.Non-referential Improvisation
The difficulty of “getting into it” with pitched instruments marked my experience with referential improvisation, as well. I have to make is sound like something. It's harder to force the music to conform to an intellectual thought. When it's an emotion like anger, fear, or sorrow, I may not want to dig deep enough to make myself feel that way. Then the improvisation becomes an intellectual task, and I feel disconnected with the music. That's something for me to work on.
Non-referential improvisation was much easier. The sounds come from within, perhaps from my unconscious mind. It presents ideas and I get to play with them, shaping them like a child might playdough. An idea is created, modified, and then I get to wipe it out and start over with something else without having to care. Transience is celebrated.
Instrumental vs. Vocal Improvisation
I played with a few instruments: guitar, Piano, and a small collection of hand drums. Playing the guitar was the most difficult, perhaps because it is not an instrument I have yet mastered. Still, itt was fun when I started playing with various chords, strumming patterns and rhythms. Then my lack of experience would rear its head and take me out of the groove. The piano was similar, but I felt more confident with it, and was able to create more passable results. I was certainly able to create pieces more relaxing, and more majestic, on the piano. The drums were just plain fun. My inner “jazz man” got to come out and play. It occurred to me, after the fact, that there's no reason those fun grooves can't come to play on the piano, as well.
Vocal improvisation came easily. I found myself spontaneously adding melodic vocal lines when improvising on guitar. Vocal improvisation is not foreign to me at all. It is often the first instrument I turn to when musical ideas for composition strike me, and I'm away from paper, computer, or piano.
Improvising Lyrics
Lyrics were quite another matter. I often make up silly lyrics on the spot, to known melodies, just to make my children laugh. We used to sing to each other instead of talking, when doing chores around the house. “It's time to clean your room, please. It's time to clean your room.” I might sing, in an overly dramatic, operatic voice. “No, Daddy, it's not. I need to eat my breakfast first,” or more often, “Do I have to?,” they might reply, smiling. Putting myself on the spot, even though I was alone, was more difficult. I couldn't think of much to say about myself that wasn't critical. “John is a fat man, trying to go to school,” and so on. Recognizing it, I immediately forced more positive lyrics, “He's dedicated to his music, and helping other people. He'll see this course to the end.” Perhaps I am too aware of my shortcomings, and don't give myself enough credit for my abilities.
Improvising on the Self
That notion, how do I reflect myself in improvisation, didn't start very well because of those lyrics. It was hard to choose an instrument to represent my real self, and my ideal self. In the end, I could only think of the piano. A part of me would love to someday sit down at a bank of synthesizers and improvise like Vangelis, but the piano is often enough.
Sometimes, when I hear other, more talented players in class, I feel jealous or discouraged. They are so good! I feel like a pretender. There are other times, however, when I'm pretty damn good. At those times, the piano and I become one being, indistinct from each other. The experience dwells in the spiritual and speaks of the sublime. But that is not often.
Improvisation is a spontaneous act of musical creation, and although I struggle with certain aspects of it, I also revel in it. It makes me feel connected to others, and can sometimes be a tool to tap into inner realms where thought and creation exist in the same space and time.