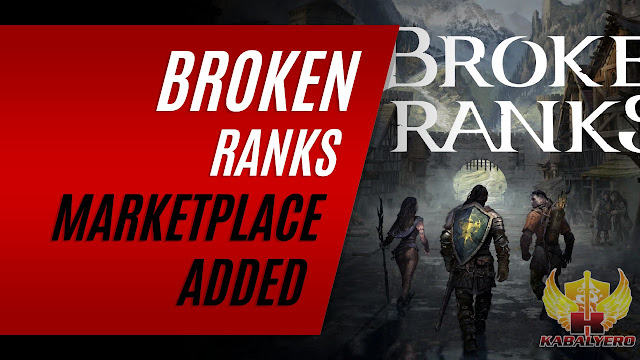 Broken Ranks is a turn-based mmorpg with a hand painted-like open world. I gave it a try and it was an okay but I haven't played it since then. Whenever since then was.

I still do get e-mails from Broken Ranks because I gave it my e-mail address when I signed up to try the game. In the latest e-mail that I received, it had information on the latest update and one of the new feature mentioned was the addition of the Marketplace.

So, the game, Broken Ranks, launched missing an important feature. I'm sure all NPC merchants were very happy that the game launched without the Marketplace because players had no choice but to buy and sell from them.

Unfortunately for them, this latest update will surely put a frown on their hand-painted faces. Their days of buying super cheap and selling super expensive are gone. With the Marketplace, players can start trading with each other and not bother transacting with greedy NPC merchants.

Of course, the marketplace was not the only thing added into the game. Other things were also added and you can find out more about those other things from Broken Rank's website.

This post first appeared on KABALYERO, please read the originial post: here
People also like
9 Things To Check Before Launching Your New Website
Quicklly – Tasty and healthy Indian Food, fresh and sizzling taste. Delivered to your doorstep
64 Awesome Things to Do in Costa Rica, Where to Stay, Know Before You Go
Terry Crews Breaks Silence On 'Black Supremacy' Tweets: "It Was A Mistake"