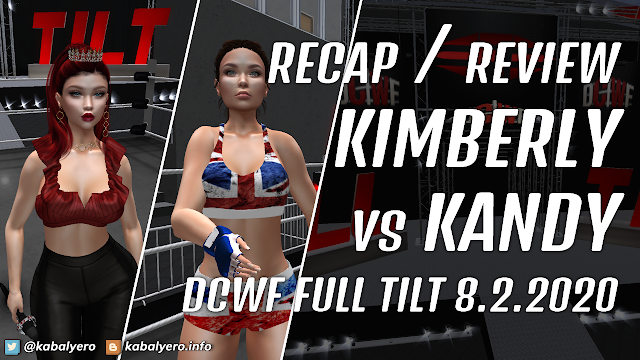 DCWF is a pro-wrestling federation in Second Life and it has a weekly wrestling show called FULL TILT. If you love pro-wrestling and second life then check out DCWF FULL TILT every Sunday at 12 PM SLT.

This week, I tried to livestream DCWF's latest DCWF FULL TILT show but I was only able to do it for one match and that match was the first match of the show.

The match was between Kandy Perez and Kimberly Smith. Some of the highlights of the match were;

I'm not sure why the Queen did what she did, maybe the two ladies called her ugly or something, but Kandy Perez did a wonderful job showing off what she can do in the ring.

Kimberly Smith kept the match grounded and, I even thought, she was going to win it until, of course, the Queen entered and whacked them with her golden scepter.

After the match, I ended the stream and watched the splashdown or return of Crew Dragon by SpaceX to complete its Demo Mission for NASA.

Anyway, the match between Kandy Perez and Kimberly Smith showcased what Kandy Perez can do and pushed a storyline involving Queen Ginarose forward.

So guys, were you able to watch the entirety of this week's DCWF FULL TILT show in Second Life? If you were then what was your favorite match? Post your answers as well as your comments, questions or reactions in the comments section below.