I didn't know that I was very conscious of my white Hair until they started appearing!  I used to have a really nice jet black hair.  No signs of white hair at all - and I was so proud of that.  Then in the recent years, well - I guess with age came the white hair strands here and there.  Before when it was only a few strands, I would pull them out and even keep them for sentimental purposes.

But now, the number seemed to grow exponentially.  I have baby hairs that are white and they are very very visible.  I felt so conscious.  I realized, this was the reason why my parents always have a box of hair dye in the house.  I used to think it was shallow - but you know what, when it happened to ME.  It's not shallow anymore.  Hahaha!

A guide to male enhancement – Tacklin…
What Is So Unique With The Baby Boome…
Pattern Connection By Camera on the B…
Artist Jason Seife Rug Paintings
Where Songs Come From: Boy Gone Bad (… 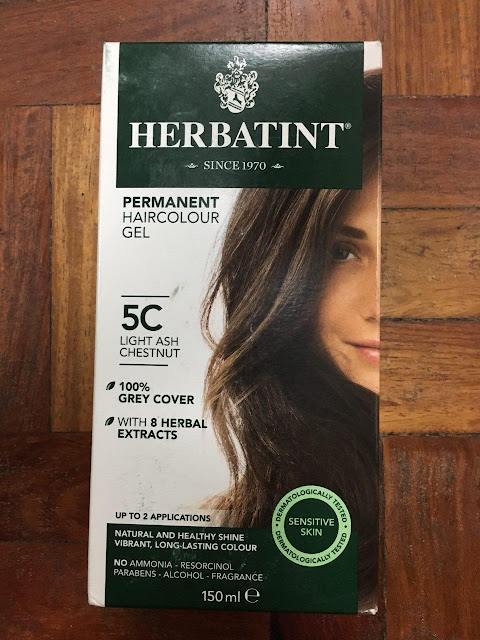 There are quite a few things that I dislike with DIY hair dyes - one is the strong scent and the other - the sting that you feel on your scalp once you put the product on your hair (and it touches the scalp).  I really really really dislike the smell, most if not all have this very strong sharp scent that *pricks* my nostrils.  I am not a newbie when it comes to hair dyes, as I have been always the go to person of my mom when she needed to dye her hair.  So, you can say that I assumed that hair dyes always have this sharp scent.  I was used to it, so it was the norm for me when it came to DIY hair color.

Recently, I noticed that my white hairs were becoming very very visible.  My Panget noticed too that it was getting quite a lot.  I was surprised when he told me, as he's not the type to say anything actually.  So when he told me, I automatically became conscious.  Just as I was contemplating on which brand to try (there are a lot of new ones around) I suddenly received a package - it was two boxes of the Herbatint Permanent Hair Color!

It was meant to be.

And so that night, I made sure to try it.

Confession - I only dye my roots.  Hahaha!  Since I have long hair, I felt it was too much work for me to do it myself.  But then - I was getting really tired of seeing my unmatched hair color.  So I decided - to use the whole box for my long hair.  I was honestly contemplating - but then I said to myself - do it now, since I had time in my hands.  And I did.

I was not able to take pictures as I was having a very difficult time maneuvering.  I was a one man team.  I had asked my Panget to help, but instead I felt that I would be doing it more correctly than instructing him to do this and that.  Hahaha!  Sorry, Panget!

It was quite a challenge to be honest, but you know what - I pulled through!  I was so proud of myself!  I was able to dye my own hair and not just the roots!

It was quite easy - the mixing of the product, it was getting the gel solution to my whole hair that was quite the challenging thing to me.  Since I have long hair - I had to use a protective cover so as not to stain my house clothes.  Since I didn't have the *coat* what I used instead was an apron to my back!   When the kids saw it they were teasing me that I had a cape on and that I was some sort of super hero!  Hahaha.. Kids, talaga noh?

This is the box and the contents: 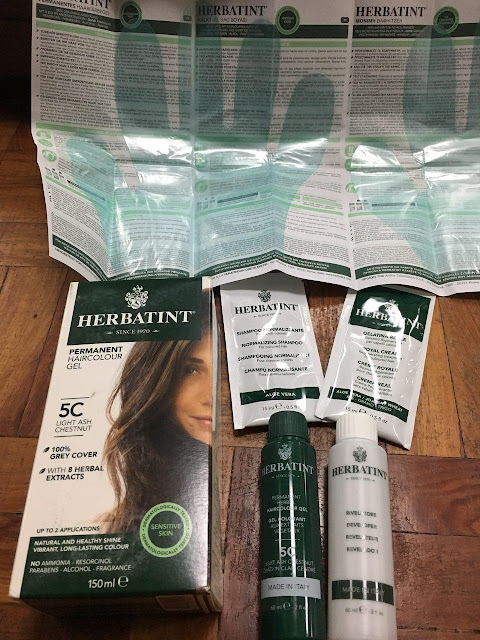 Note that there are no plastic tube (which I was accustomed to) nor a brush for application.
Mixing the two gels was quite easy.  I used a glass bowl so there won't be staining.  The bottles had measurements on the side, so you'll know how much product to use.  This is quite nice since the pack can be used for 2 applications.  Just follow the lines and voila - nothing is wasted!  It was nice to see that after you mix the two liquids together it becomes a dark color.  It says in the box that the color of the mixed gel is not an indicator of the result after application.  I laughed when I saw this because, as you know people have this tendency to overreact.  Haha!!   Application took about 20 minutes. Would you believe that the gel did not cause any stinging in the scalp?  NO STING!  Great, right?  I decided to use the whole box since I wanted to even out the color of my hair.  And  I was being thorough too - especially on the roots and on the baby hairs that were very visible.  I had to make sure they're all covered as it will defeat the purpose of what I was doing in the first place when I see white hairs.  After applying the gel and endless combing, I twisted my hair in a bun and clamped it.  I also wore a shower cap.

Then I pressed the timer on my Fitbit.

I looked at it every so often because I was excited and curios on the result of the coloring.  I waited oh sooooo patiently.  When finally the 40 minutes were up, I saw that around my face - there were brown spots.  Aya!  I forgot to wipe off the drops!  Hahaha..  Good thing a hairspray trick did it's job.  Yehey!

The water from my hair was colored green!  I was honestly scared at first, but then I remembered what I read - that the color of the gel is not the same as the result.  Hahaha!  I used the shampoo and the cream conditioner included in the box.

A very happy observation - my hair was not very tough when I was shampooing it.  In my experience with other brands (and other methods of coloring), the hair is usually very tough (matigas), but with  Permanent Hair Color, it was not tough and it didn't feel brittle at all.  It wasn't very soft, but it was soft enough for me to notice the difference.

I used a blow drier to dry my hair - I don't usually do that anymore - but I really wanted to see and feel the difference.  After blow drying my hair - it was soft and it didn't have that very sharp scent.  It had a faint scent that was negligible.

Here is the result: 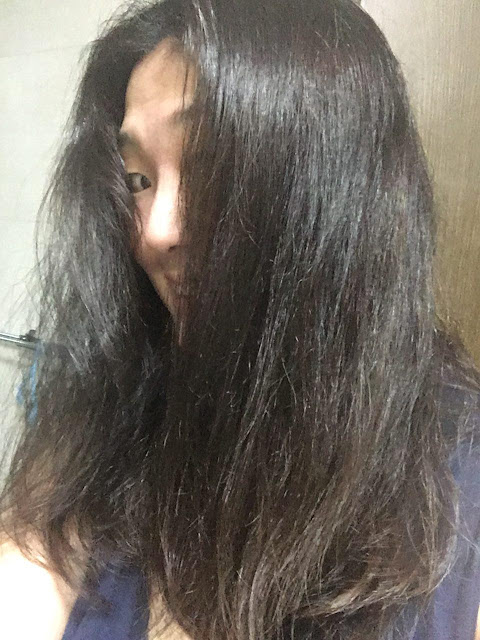 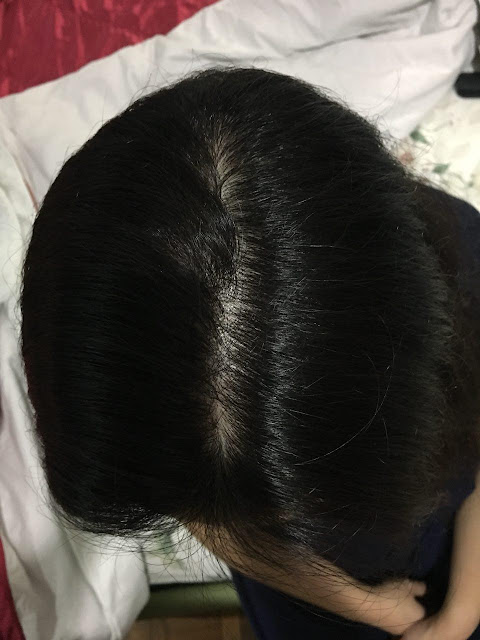 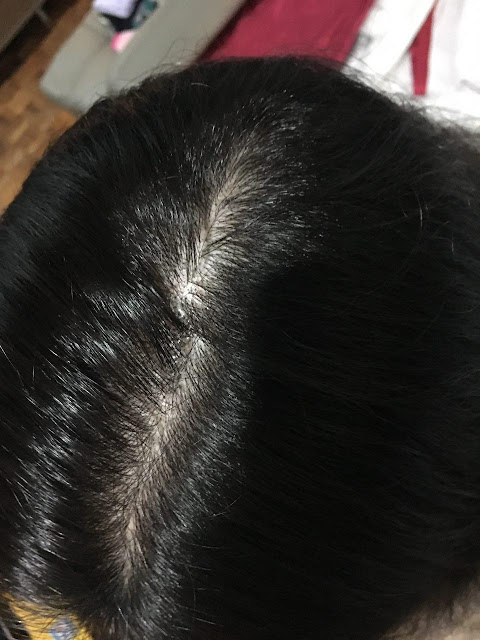 Look, no more white hair!  Yehey!  My whites were all covered and they're a shade of brown now.  I'm so happy that my hair has now a uniform color!

Herbatint is available in all Healthy Options stores.  Price wise, I think its a little over P1,000.00, quite pricey - but if you read the label - it's plant based so it's safer than most brands. 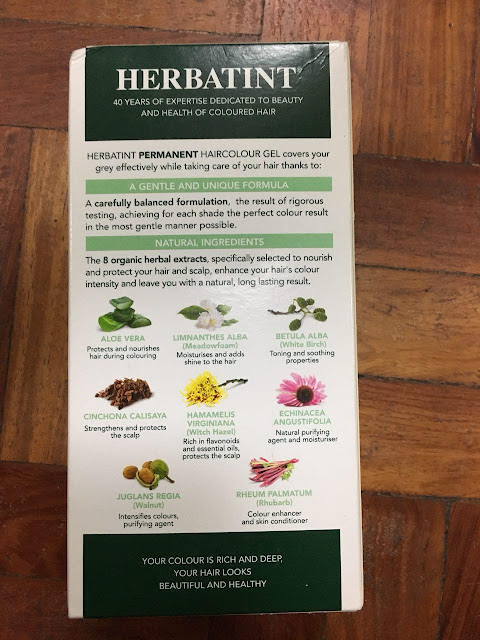 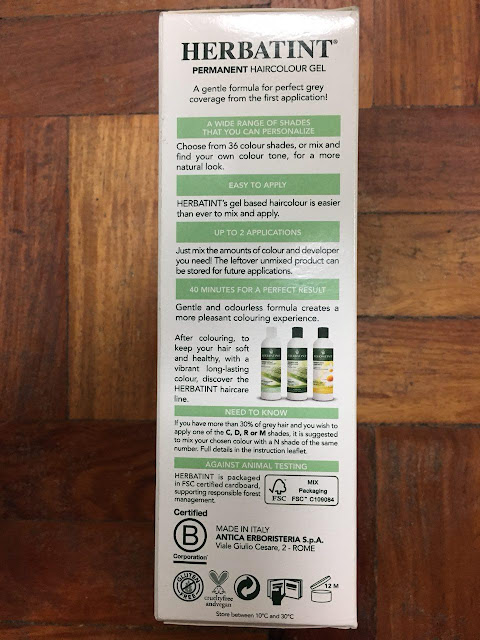