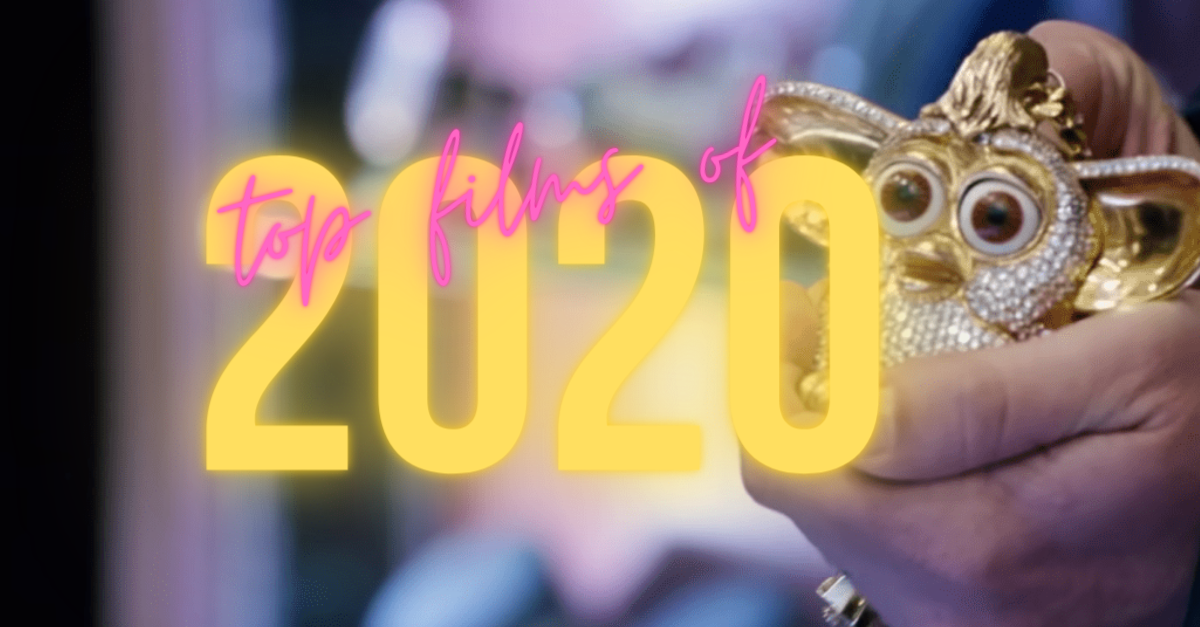 2020 has been a tough year, and the pandemic has had a huge impact on the daily lives of everyone. In the Film industry, there was tragic news of venue closures, viewing experiences dissolved and cinema release dates pushed back as far as 2022. Having made my usual most anticipated films of the year list at the start of the year, we were all set for another stellar twelve months of cinema but March had other plans for us.

The result of this has meant end of year favourites look very different from expected, but as you'll see from the following list, 2020 wasn’t a total disaster after all because some beautiful films still got through; providing comfort, adventure and escapism via streaming services, limited showings and releases - sending the world of film and cinema upside down. Through the chaos and uncertainty, there have been a few incredible films that still managed to wriggle their way through the cracks. Here are my top 10 films of 2020.

10. 1917 (Sam Mendes, 2020) - Three years in to WW1 on 6 April 1917, two young British soldiers, Schofield (George MacKay) and Blake (Dean-Charles Chapman), must deliver an urgent message to a distant battalion in the hopes of saving the lives of 1600 men. With all communications cut and the enemy advancing, they must travel on foot though life-threatening terrains.

Whether or not war genre is your thing, Sam Mendes' 1917 is a hell of a feet in filmmaking. Filmed to appear as one long shot, the World War I drama takes us through the hellish realities of war; across No Man's Land, enemy bunkers and flaming backdrops. Each scene is seamlessly stitched together with thanks to Roger Deakins' astonishing camerawork. For all it's technical success, 1917 still manages to be an emotional narrative with George MacKay and Dean-Charles Chapman putting in empathetic performances. Though it doesn't have the same power that perhaps we've seen from the likes of Dunkirk (Nolan, 2017), 1917 is a harrowing, tense and beautiful piece of cinema.

OK, so technically I'm cheating a bit here. I know Palm Springs didn't technically get a UK release in 2020 but let's face it, rules have changed in 2020. Having made a splash at Sundance this year, I thought I'd throw it in for good measure. It make take the basis of it's entire story from Groundhog Day but Palm Springs still manages to be stylish, fresh and funny. Besides being very pleasing on the eye, it could not have come at a better time when the year felt endless and, quite frankly, pointless. Though not without it's faults, Palm Springs is a charming, amusing and relatable - with Samberg and Milioti fitting the bill perfectly.

8. Portrait of a Lady on Fire (Céline Sciamma, 2019) - Set in 1770s France, Marianne (Noémie Merlant) is a painter, on the isolated island of Brittany, commissioned to do the wedding portrait of Héloïse (Adèle Haenel) - a reluctant young bride-to-be who refuses to pose for portraits. Marianne's instructions are to paint her without her knowing. She observes her by day, to paint her secretly. Soon, the pair form a forbidden affair.

As we saw from Girlhood (2014), Sciamma is masterful in portraying complex female characters - enchanting audiences with deeply layered and prominent scenes. Portrait of a Lady on Fire does just that, creating an intimate story but constantly building and building towards its emotional climax. A must-see tragic love story with a rightful place in modern cinema.

7. Jojo Rabbit (Taika Waititi, 2020) - Written, directed by and starring the impeccable Taika Waititi, Jojo Rabbit is an anti-hate satire for the ages. Set in World War II, the film follows Jojo (Roman Griffin Davis), an awkward young German boy whose only ally is his imaginary friend, Hitler (Waititi). As a member of the Nazi youth, his patriotism is tested when he meets a young Jewish girl (Thomasin McKenzie) hiding in his home - forcing him to face his biggest fears. The star-studded line-up also includes Scarlett Johansson, Oscar-winner Sam Rockwell, alongside the ever-amusing Stephen Merchant and Rebel Wilson.

On paper, a satire about a member of the Nazi youth and his imaginary friend, Hitler, sounds strange and it seemed not all critics got it. Yet, as to expected from our beloved Taika, Jojo Rabbit is a daring and heartfelt story of childhood with a prominent theme of anti-hate in response to our current society. One of it's major strengths is the stellar performances from Scarlett Johansson and Sam Rockwell, but also from Waititi himself and newcomer, Roman Griffin Davis. Whilst Taika Waititi’s most audacious film isn’t his most successful, there's some truly tender and hilarious scenes to kickstart off our year with hope.

6. Saint Maud (Rose Glass, 2020) - Maud (Morfydd Clark) is a solitary young nurse and devoted born-again Christian following a traumatic experience. Now working as a hospice carer for wealthy retired dancer and cancer patient, Alice (Jennifer Ehle), Maud's faith quickly intensifies and consumes her with a need to save her ward's soul from eternal damnation, whatever the cost.

An astonishing directorial debut for Rose Glass, Saint Maud is unexpected, chilling and bold. Morfydd Clark's mesmerising as the newly religious nurse, an unsettling score and a deeply haunting narrative, Saint Maud will linger with you for a while. I can't wait to see what Rose Glass does next.

5. Soul (Pete Docter, 2020) - Disney Pixar's Soul follows passionate school teacher, Joe (voiced by Jamie Foxx), and his dreams of playing in a legendary New York jazz club. However, just as Joe's dream is about to come true, an unfortunate step-out in to the street lands him in the afterlife. Here, he is made to evaluate what it truly means to have a passion. In order to get back to his body, he must join forces with the reluctant, lost soul 22 (Tina Fey) who is determined to remain bodiless in the realm.

In terms of narrative and visual effects, I believe this to be Pixar at their finest. Full of depth, beautiful scenes and surprises from start to finish, Soul doesn't shy away from exploring what it truly means to be 'you'. It reminds us that even if we don't feel that we're on the right track, there's nothing wrong with rediscovering your passion - or even a new one.

I'd like to mention that I've read some mixed opinions regarding the film's black representations so have tried to do my research to better understand some of the backlash. I do believe Foxx (who won an Oscar playing Ray Charles) is perfect to play Pixar’s first African American leading role and it's promising to see co-director/writer Kemp Powers working alongside consultants (such as anthropologist Dr Johnnetta Cole) to ensure that the film’s cultural reference points are well executed.

4. The Invisible Man (Leigh Whannell, 2020) - Having escaped her wealthy abusive ex-boyfriend, Cecilia (Elisabeth Moss) attempts to start a new life. Following news of his death and a large inheritance left in her name, she begins experiencing strange and unexplainable events - causing her to question if he's really dead.
Very loosely based on the novel of the same name by H. G. Wells and placed as a small-scale reboot within the Dark Universe, some may have gone in to The Invisible Man with mixed expectations. What we get, however, is an intense and genuinely scary, fresh take on an age-old narrative. Like all good psychological horrors, we are placed in the mindset of the protagonist, constantly questioning ourselves and sanity. Keeping us on the edge of our seats, Leigh Whannel has created a sophisticated and suspenseful horror that beautiful illustrates a woman's silenced trauma and the impacts of a toxic relationship - not to mention a fantastic performance from Elisabeth Moss.

As to be expected with any Christopher Nolan film, the notion of time plays a hearty role alongside some truly remarkable filmmaking and cinematography. In Inception (2010), we see fifty hours of a dream world condensed in to five hours; whilst in Dunkirk (2017), audiences experience the perspectives from a week on land, a day at sea and an hour in the air. In Tenet, the mind-blending concept of time, demonstrated through inversion, gives a physical framework for the film - in which temporal physics can be reversed, allowing objects and events to run backwards instead of forwards. Confused yet? You will be.

This isn't Nolan's best work but, coming from Nolan, it's still nothing short of outstanding. The subject matter could alienate some audiences due to its complexity but with some stellar performances across the board and thrilling action from start to finish, Tenet truly injected some adventure in to 2020 - though, perhaps a second watch is necessary to really take it all in.

2. Uncut Gems (Josh Safdie, Benny Safdie, 2019) - A charismatic jeweller, Howard (Adam Sandler) struggles to pay off his gambling debts but takes a high-stakes bet that could lead to the windfall of a lifetime. In a precarious high-wire act, he must balance his debt collectors, an estranged wife (Idina Menzel), a girlfriend (Julia Fox) and adversaries on all sides in pursuit of the ultimate win.
After Good Time (2017), the Safdie Brothers hone in on their anxiety-inducing filmmaking talents with a thriller which is sure to have you stressed from the get-go. Aided further by Adam Sandler's fidgety performances, he establishes himself as a talented dramatic actor; putting in a career-best performance as the loveable yet reckless diamond dealer Howard Ratner you just want to shake. With Sandler's performance set against a hectic backdrop of the clubs, family-life, dodgy dealings and 'bright ideas' that could collapse at any second, Uncut Gems is an adrenaline rush you'll watch through your fingers.

1. Parasite (Bong Joon Ho, 2019) - The struggling Kim family decide to make their own luck when the son starts working for the wealthy Park family. Having successfully conned their way in to privileged positions within the same household, an unexpected turn of events makes keeping up the act a challenge.

Taking home six Oscars at the beginning of the year, including Best Picture and Best Director, this part thriller, dark comedy and tragedy seemingly came out of nowhere. Having deliberately learnt as little about it as possible before the viewing, I was quickly sucked in to an unexpected and thrilling narrative.

The juxtaposition of the Kim family and the wealthy Parks is deeply layered and poignant - yet Parasite still manages to exciting, funny and suspenseful all at once. Bong Joon Ho flawlessly combines Hitchcockian suspense whilst giving a nod to decades of Asian horror movies, alongside some truly hilarious moments. Before 2020 went off the rails, Parasite was a golden beacon and Best Picture really did go to the best picture.

Well, there you have it - my top 10 films of 2020. Surprisingly I still struggled to order and narrow down my list this year. Some honourable mentions also go to A Beautiful Day in the Neighbourhood, A Personal History of David Copperfield, Birds of Prey, Never Rarely Sometimes Always, Shirley, The Lighthouse and Possessor. Some films I have still shamefully waiting at the top of my watchlist are Mangrove, And We Danced, She Dies Tomorrow, Rocks and Mank. I'm hoping to catch up on some of those very soon. But for now, tell me - what were some of your favourite films of the year? Did you make it to the cinema at all this year? As always, I love reading your comments so please do share your thoughts below.

Here's hoping 2021 sees the release of even more amazing movies.

Until next time film fans, happy new year and keep safe in 2021

Disclaimer - these films were released via theatres or streaming services from January 1st 2020 - December 30th 2020.