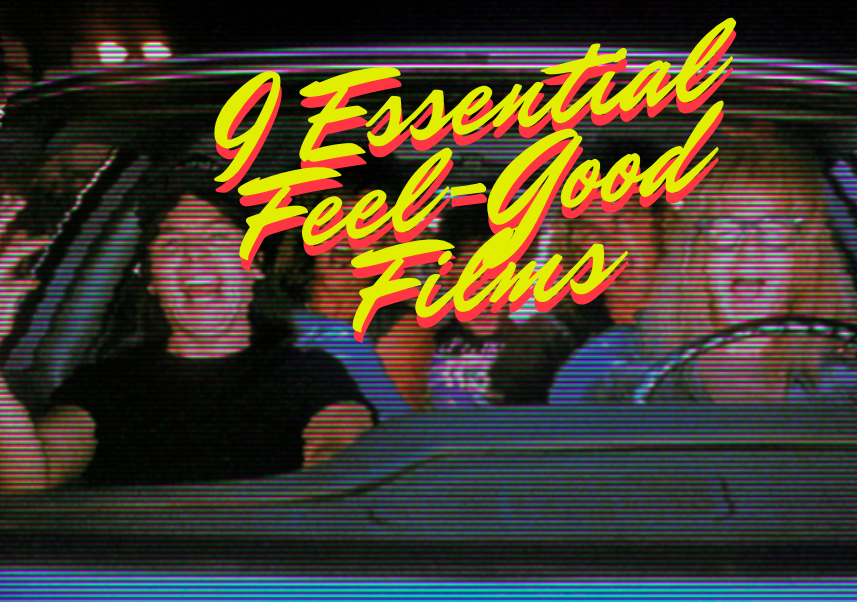 So it's safe to say things have escalated quickly with Coronavirus (COVID-19). It is understandably a scary and uncertain time for everyone. And, whilst distractions aren't always a cure, we can still find happiness in little things - for me it's usually Film. So, in a bid to bring a smile to your face, here are nine essential films to cheer you up during quarantine.

Little Miss Sunshine (Jonathan Dayton, Valerie Faris, 2006) - The Hoovers are a stressed fuelled, dysfunctional family. Father, Richard (Greg Kinear) is desperately trying to get his business venture off the ground with little success; Uncle Frank (Steve Carell) is a shamed professor whose recent failed suicide sees him living back with his sister and brother, Dwayne (Paul Dano), is a mute. However, when seven-year-old Olive (Abigail Breslin) is invited to compete in the "Little Miss Sunshine" pageant in far-off California, the family decides to put their squabbles aside and set out on a road trip in support their daughter.

This family of odd-balls may have their problems but Little Miss Sunshine is a thought-provoking, hilarious comedy with a whole lot of heart. It goes without saying, also, that it features some incredible performances from its all-star cast.

Paddington 2 (Paul King, 2017) - Paddington Bear returns to the Big Screen and this time he is looking for a special gift for Aunt Lucy's 100th birthday. However, when the book is mysteriously stolen, Paddington becomes the prime suspect and finds himself in prison. In order to prove his innocence, he recruits the help of his friends and family.

You'd have to have a heart of stone not to fall in love with Paddington Bear. If you didn't catch his first adventure, Paddington (2014), you'll still have plenty to enjoy his second film - which I actually believe to be the better of the two. I was lucky enough to watch this for the first time with my mum at the UK Premiere and it was nothing short of delightful. We laughed, we cried, we loved it. The ultimate family, feel-good movie. Available to watch now on NOWTV.

Booksmart (Olivia Wilde, 2019) - Olivia Wilde makes her directorial debut with this empowering, coming-of-age comedy. Booksmart follows straight-A high school students Molly (Beanie Feldstein) and Amy (Kaitlyn Dever) who decide to break their no-party pact in the final 24 hours before graduation. Wilde does an incredible job in balancing moments of hilarity with the awkward and tender whilst Feldstein and Dever deliver flawless and funny performances.

I must have seen this film six times by now and everytime I have loved it. Easily one of my most loved films of all time and one of the best films of 2019, please be sure to see this movie immediately, please. Available to watch now on Amazon Prime Video.

La La Land (Damien Chazelle, 2016) - La La Land follows the story of Mia (Emma Stone), an aspiring but struggling young actress in modern day Los Angeles. Having met Sebastian (Ryan Gosling), a dedicated yet conflicted jazz musician, the pair set out to pursue their dreams in a city where not everyone can make it. Presented as an all singing, all dancing musical, the pair must choose between a lifetime love or the glowing spotlight.

Dubbed the 'musical for people who don't like musicals', expect a rollercoaster of emotions, beautiful cinematography and amazing performances from both Stone and Gosling. I'm not usually one for romantic films but La La Land makes my heart happy. Available to watch now on Netflix.

Wayne's World (Penelope Spheeris, 1992) - Adapted from the famous SNL characters for the Big Screen, Wayne (Mike Myers) and Garth (Dana Carvey) are two best friends from Chicago, - broadcasting a low-budget TV show on local public access television from Wayne's parents' basement. However, when the show begins to attract the attention of a network executive, Ben (Rob Lowe), who wants to produce a big budget version of the show, things don't quite go to plan. Battling against the studio, Wayne and Garth must work to save their show whilst also stopping Ben from trying to steal Wayne's girlfriend, Cassandra (Tia Carrere).

Wayne's World never fails to make me laugh - no matter how many times I watch it. It very much sums up my sense of humour. This film is arguably Myer's peak, with highly quotable jokes and hilarious performances and writing from Myers and Carvey is what makes this a true classic. If you haven't seen it yet...where the hell have you been? And once you've given this one a watch, be sure to watch the Wayne's World 2 straight after. Available to watch now on NOWTV.

Bridesmaids (Paul Feig, 2011) - Annie (Kristen Wiig) is a maid of honour whose life begins to unravel as she leads her best friend, Lillian (Maya Rudolph), and a group of bridesmaids (Rose Byrne, Melissa McCarthy, Wendi McLendon-Covey and Ellie Kemper) on a wild ride down the road to matrimony.

I have never been one for romantic comedies or chick flicks but Bridesmaids is truly so much more than its genre category. Kristen Wiig delivers an iconic performance in this heart-warming, hilarious comedy which for me, never gets old. It's hardly surprising that this film was nominated for 2 Oscars - including Best Original Screenplay for its brilliant writing, also by Kristen Wiig. Available to watch now on Netflix.

The Muppets (James Bobin, 2011) - Gary (Jason Segal), Mary (Amy Adams) and Walter (voiced by Peter Linz) must help to reunite the Muppets to save the Muppet Theatre from Tex Richman (Chris Cooper), a avaricious oil mogul who wants to destroy the Muppet's legacy.

Whether you grew up loving the Muppets, have children or neither, this comedic fantasy-adventure is a must-see. Absolutely for grown-ups but with some fun thrown in for the kids, this is the Muppets as you fondly remember them: funny, smart and utterly insane; with Oscar winning songs from Flight of the Conchords star, Brett McKenzie. This film is the embodiment of nostalgia and joy which never fails to make me smile. Available to watch now on NOWTV.

Amélie (Jean-Pierre Jeunet, 2001) - Amélie (Audrey Tautou) is a a young Parisian waitress who decides to help others find happiness using her creative imagination and investigative skills. Her quest to spread joy leads her on a journey where she finds true love.

From acclaimed French director, Jean-Pierre Jeunet, it's hardly surprisingly that this is a bizarre yet  utterly beautiful film. The first time I saw it, I wasn't sure what to think but it has become one of my most favourite films of all time. Steeped in whimsical charm, you can't help but get swept up. Available to watch now on Netflix.

Imitation of Life (Douglas Sirk, 1959) - Lora Meredith (Lana Turner) is a widow and aspiring actress who befriends Annie (Juanita Moore), a down-on-her-luck, black widow, also with a young daughter. The film depicts their struggles, successes and ever-changing friendship through the years.
Don't be put off by the year it was made - it may be an oldie but this is certainly a goldie. Featuring two incredible performances by Lana Turner and Juanita Moore, Imitation of Life is a truly incredible story decades before its time - tackling the powerful subjects of class, race and gender. This truly a heartwarming story of friendship and humanity which has aged beautifully. The original of the same name, made in 1934 and starring Claudette Colbert, is equally worth a watch if you can get hold of a copy.
___
Well, that's it for some of my most-loved, feel good movies. I hope they'll serve you well during the days of lockdown and quarantine. But tell me, what are your favourite feel-good movies? Have you seen any from my list above? As always, I love reading your comments so please so share your thoughts with me below.


This post first appeared on POPCORN AND GLITTER, please read the originial post: here
People also like
Oura Smart Ring and its Amazing Health Features
5 Celebrities Who Use CBD To Stay Calm And Relaxed
Step-by-step recipe to make garlic breadsticks
Guiding Your Teen Towards a Career in Film
5 Types of Social Media Content That Convert Traffic Into Customers