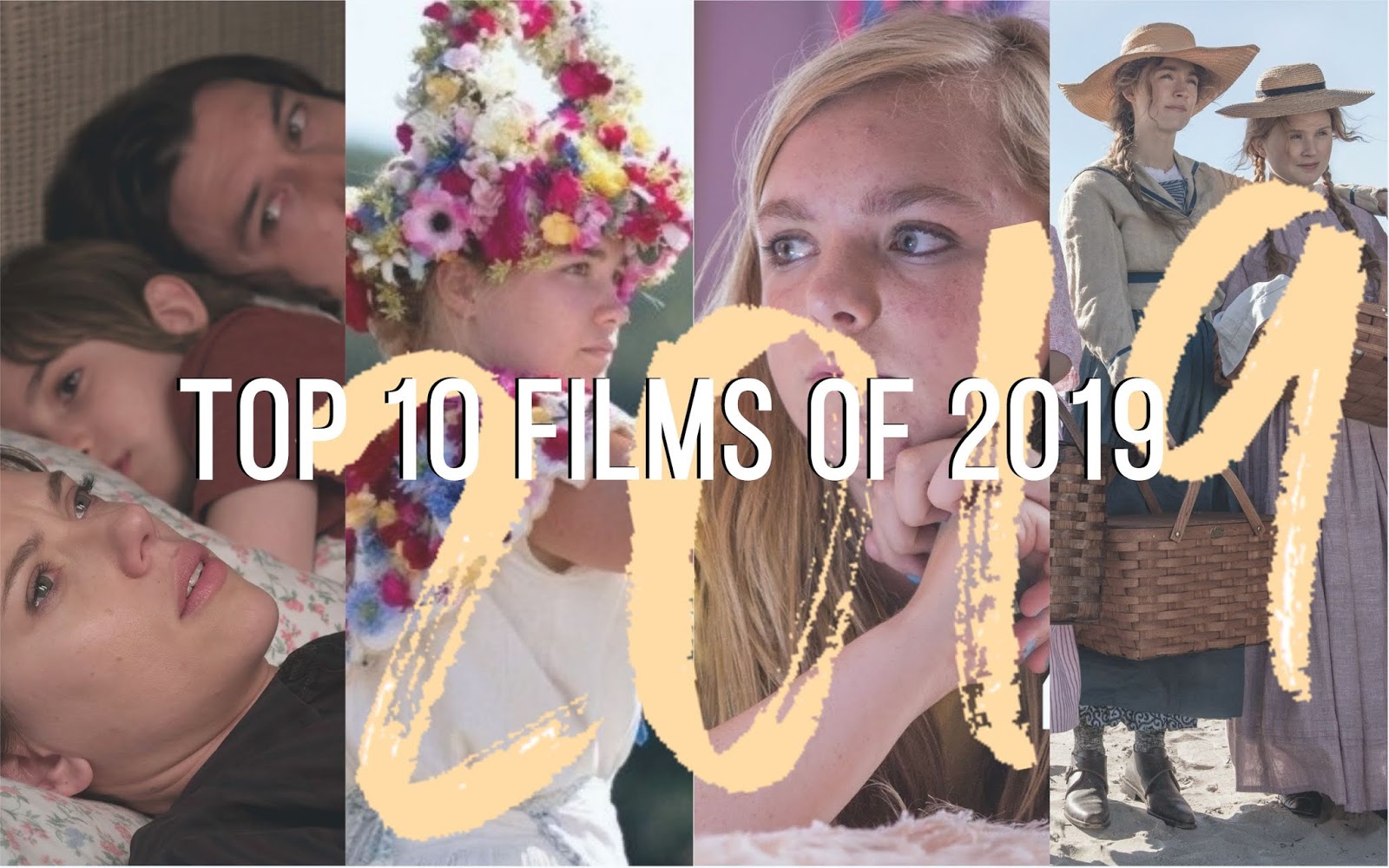 2019 proved to be yet another eventful year for Hollywood. The last 12 months has seen the end of several sagas and eras, debates surrounding women in Film, as well as some of the most controversial of award nominees. From big-time buy outs to streaming services and new technological advances, it was certainly a year of epic proportions. It's been no easy task but here are my Top of 10 films of 2019*. 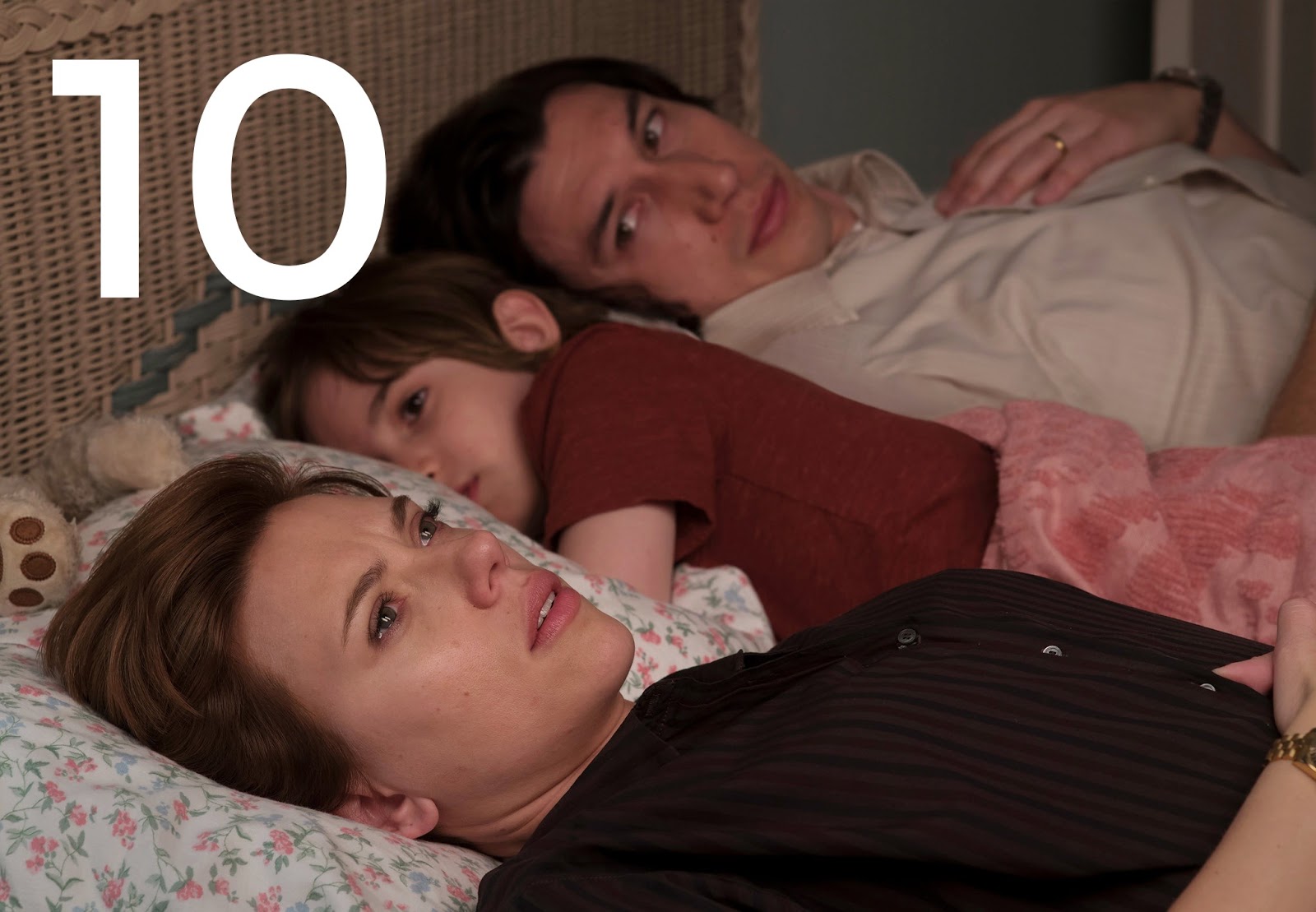 10. Marriage Story (Noah Baumbach, 2019) - Mirroring much of the director's own experiences, Marriage Story is an emotional of Nicole (Scarlett Johansson) and Charlie (Adam Driver) as they attempt to navigate their divorce as amicably as possible. Travelling back and forth from New York and Los Angeles, the couple are forced to bring in lawyers to negotiate their future family set-up and, with it, an unavoidable strain to their already fragile relationship. To be expected, both Johansson and Driver deliver award worthy performances in this heart-wrenching, tender story of love and loss which may just be Noah Baumbach's best work yet. 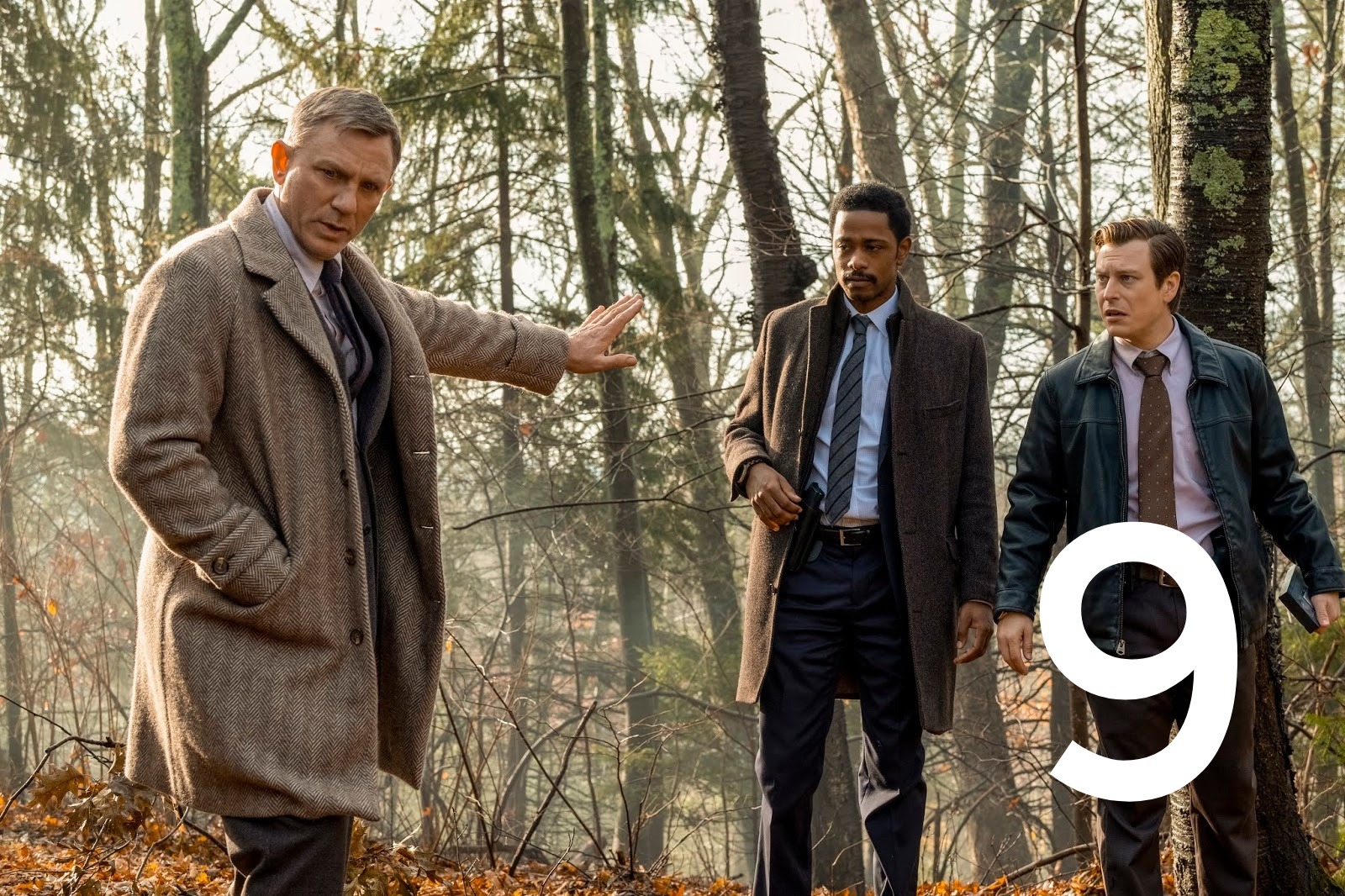 9. Knives Out (Rian Johnson, 2019) - Acclaimed writer and director, Rian Johnson (Brick, Looper, Star Wars: The Last Jedi), presents a long anticipated whodunit unlike any other with comedy, crime drama Knives Out. With an all-star cast, including the likes of Daniel Craig, Chris Evans, Toni Colette, Jamie-Lee Curtis, Christopher Plummer, Don Johnson et al, Rian Johnson does Agatha Christie proud with this brilliantly sharp and modern tribute to the genre, in which everyone is a suspect. Read my full film review of Knives Out. 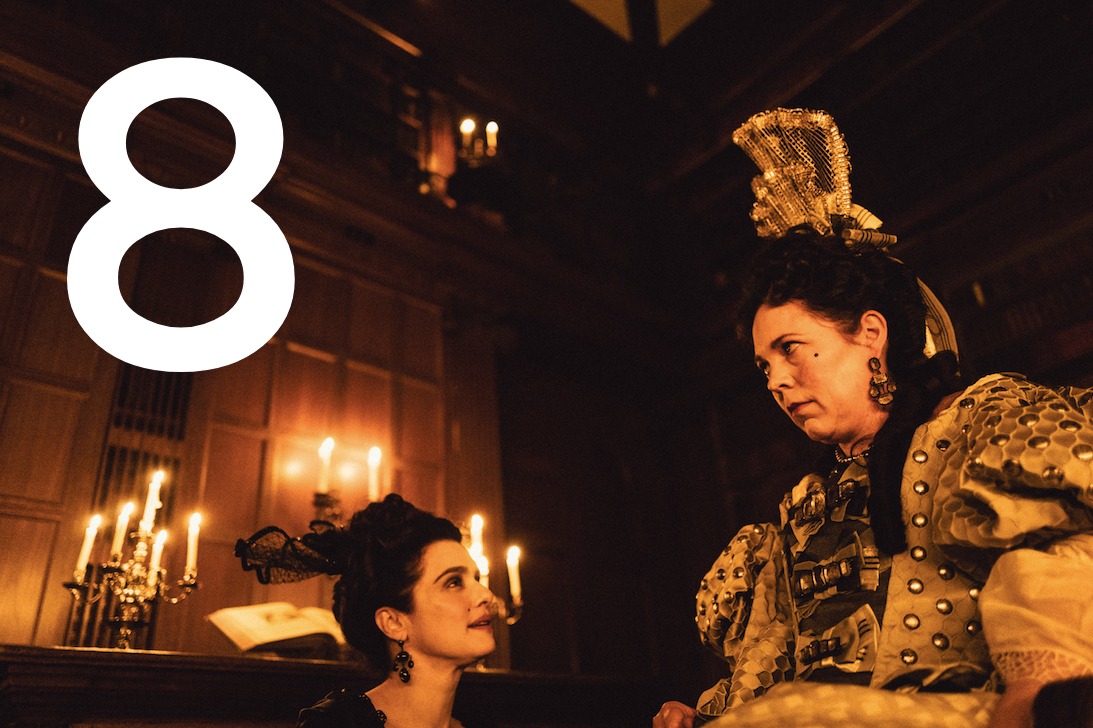 8. The Favourite (Yorgos Lanthimos, 2019) - Set in the early 18th century, at a time when England is at war with France, a frail Queen Anne (Olivia Colman) occupies the throne alongside her close friend, Lady Sarah (Rachel Weisz). Despite being at war, Ann continues with her extraordinarily lavish lifestyle of cake and lobster racing. However, Lady Sarah's position as the Queen's hand comes in to question with the arrival new servant, Abigail (Emma Stone). Having charmed the Queen, Abigail sees a chance to return to her aristocratic roots and replace Sarah as the Queen's favourite.
If you've seen the film, you'll agree that it is certainly unique and not your average period drama. Better yet, if you've seen any of Yorgos Lanthimos' back-catalog, you'll know his films are far from civilized (in the best possible way). Of course, the Oscars saw Olivia Coleman so rightfully take home the gold for Best Actress - which is reason alone to make this film a must-see for 2019. 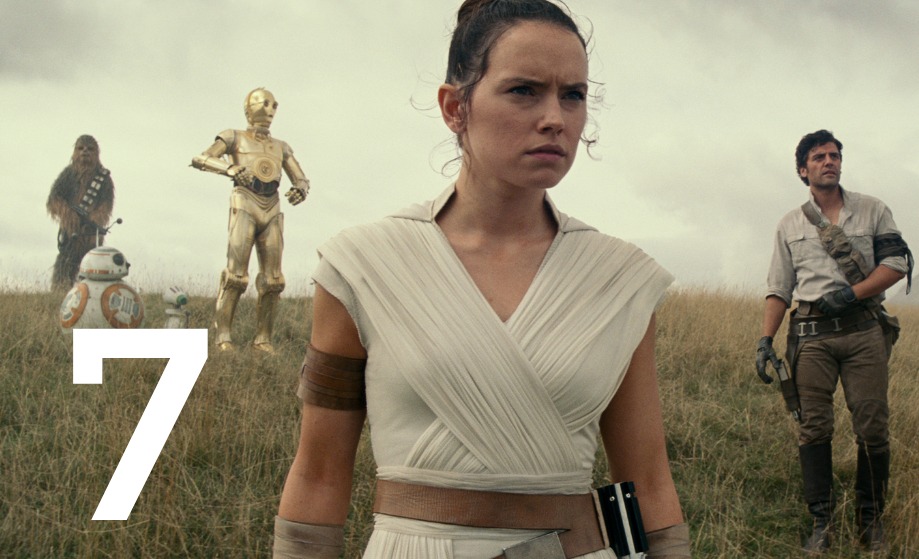 7. Star Wars: The Rise of Skywalker (J.J. Abrams, 2019) -  With Star Wars: The Last Jedi (Rian Johnson) being one of the most debated films of the decade which was torn limb from limb,  J.J. Abrams has stepped in to write and direct the final chapter. It's best not to discuss the plot in too much detail but know that it sees the return of Daisy Ridley as Rey and John Boyega alongside a few familiar faces as the Rebellion face their toughest hurdle yet and seek to defeat the evil Resistance and Kylo Ren (Adam Driver).
Ultimately Rise of Skywalker was, arguably, the best possible and safest way to end the saga. As well as being visually stunning, it neatly ties up all lose ends from the films past and present as it bids an emotional farewell to the franchise. It does, however, undo a lot of the great work done by Rian Johnson in Last Jedi and it's clear that Abrams panders to the fanboys with this sheltered ending. Nether-the-less, I throughly enjoyed this film and thought it to be a beautiful finale. 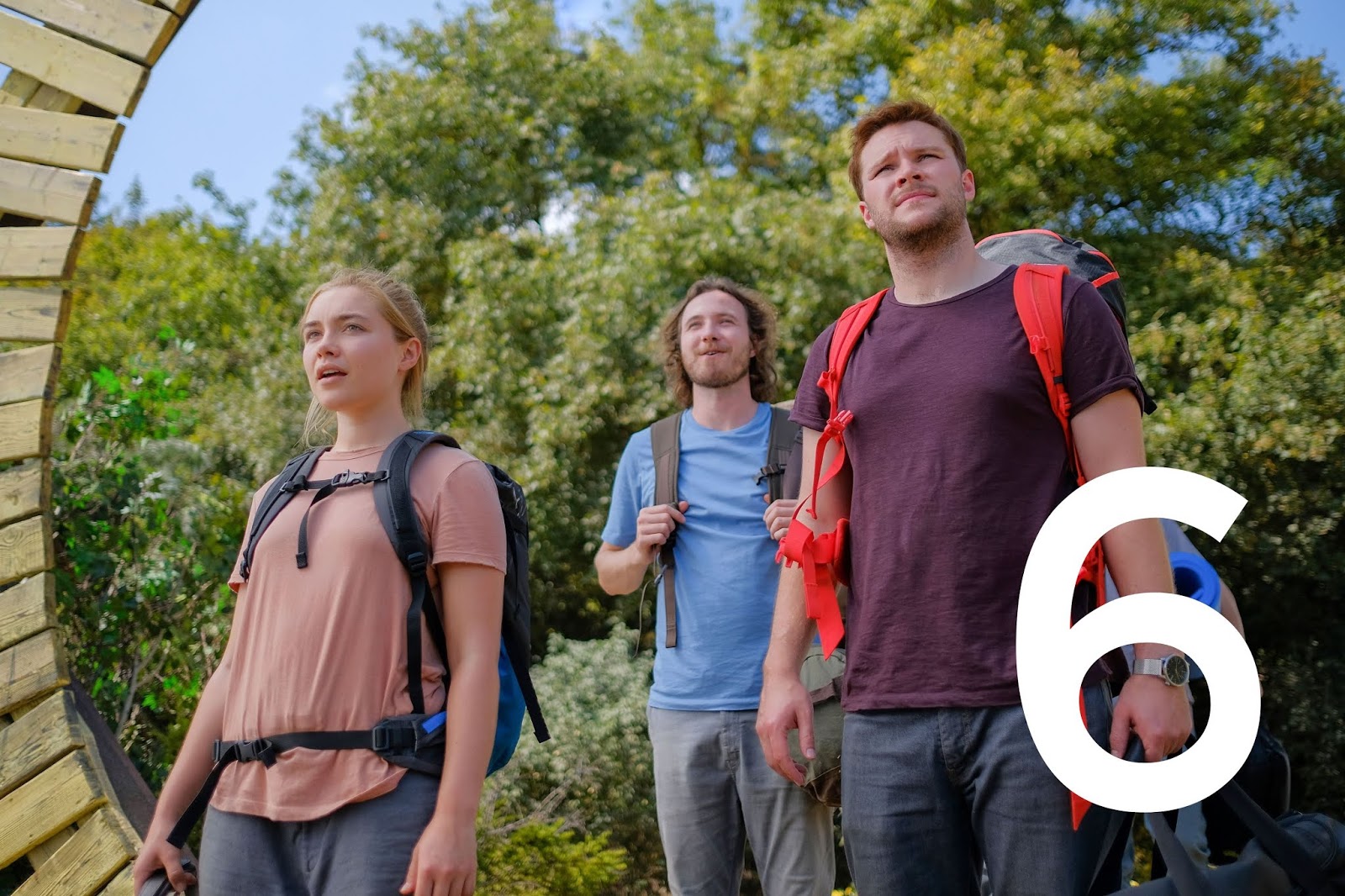 6. Midsommar (Ari Aster, 2019) - Certainly not for the faint hearted, Aster's highly anticipated follow up to Hereditary (2018) is a visceral and utterly distrubing experience that combines Aster's love for occult and the monstrous. The film features some incredible performances, particularly that of Florence Pugh as Dani; who, following a horrific family tragedy, agrees to accompany her inattentive boyfriend and his friends on a trip to rural Sweden for the Midsommar festival. Things quickly take a turn for weird - so be sure to prepare yourself for dark depictions of grief, tragedy a whole lot of folk music. 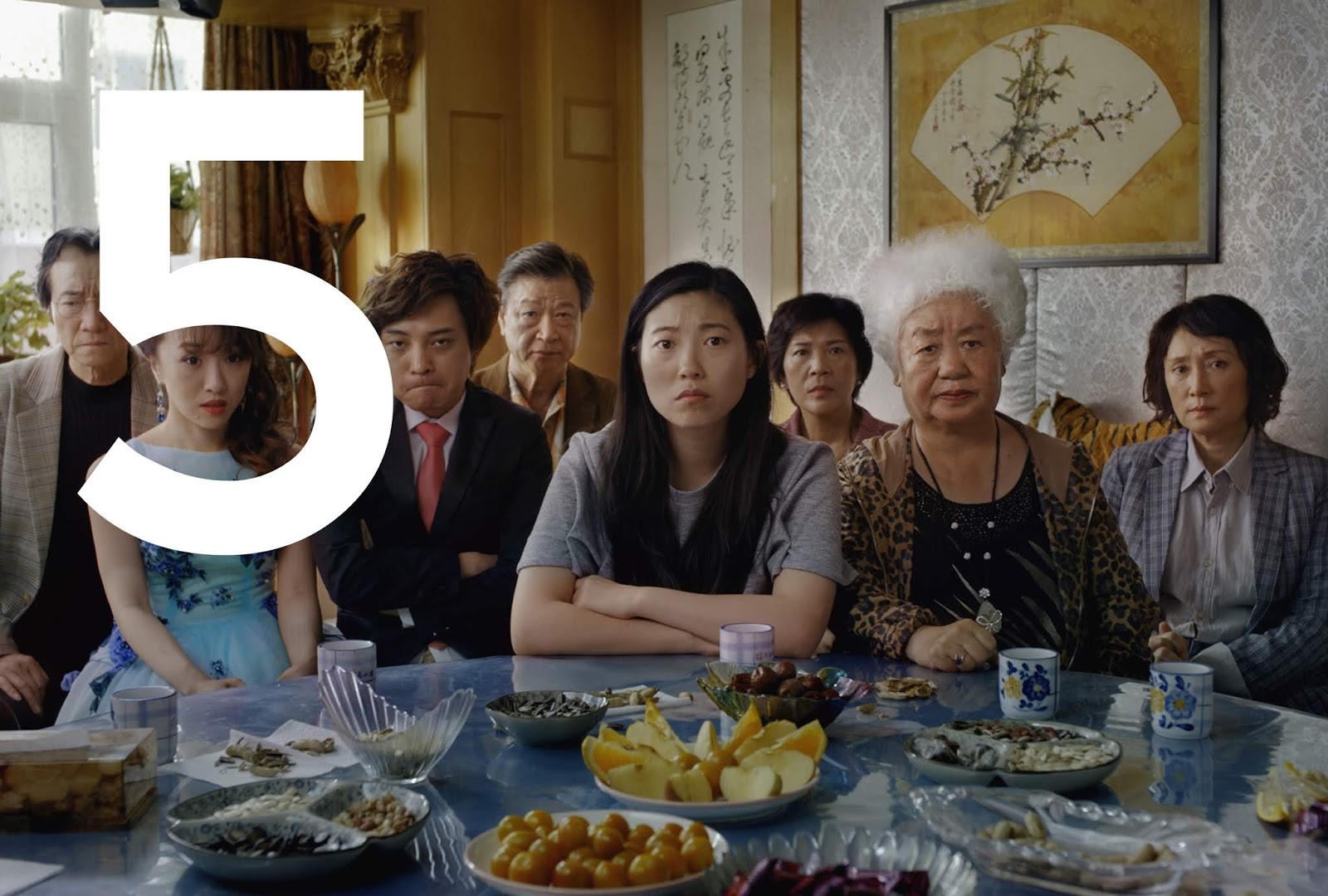 5. The Farewell (Lulu Wang, 2019) - When broke Chinese-American writer Billi (Awkwafina) learns that her unsuspecting grandma is dying, she and her family travel to Changchun for one final visit. As if the trip wasn't hard enough, Billi is given strict instructions to pretend that nothing is wrong and to keep the news of poor health a secret from her grandmother. It may sound depressing but The Farewell is an uplifting, hilarious and thoroughly charming piece which showcases Awkwafina's interminable talents and the human condition. It was regrettable not to see The Farewell in more mainstream cinemas but here's hoping the awards will rightfully recognise it and give it a second push to audiences. 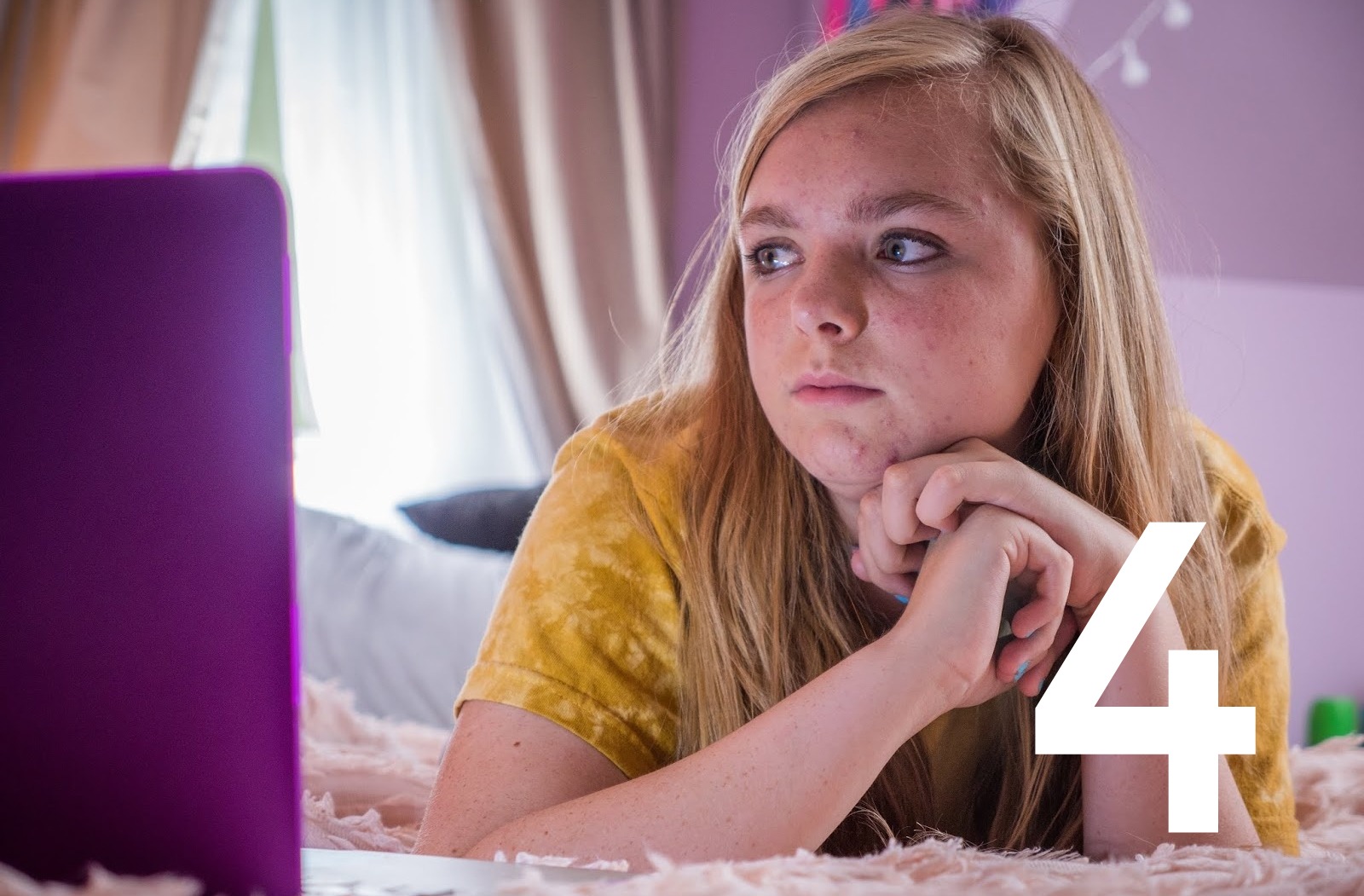 4. Eighth Grade (Bo Burnham, 2018) - This film is not only a salute to the generation raised online but to any of us who have ever been a teenager. Every girl should see this movie and I am not ashamed to admit that I full on ugly-cried throughout. Further to this, Elsie Fisher delivers a truly wonderful performance as Kayla - an awkward thirteen year old, trying to navigate herself through the pressures of social media and fitting in during her final week of middle school. I felt her angst, I felt her anxieties and wanted nothing more than to shake her and tell her it was all going to be OK. A masterpiece and a triumphant directorial debut for Bo Burnham.

3. Little Women (Greta Gerwig, 2019) - In yet another adaptation of the famous Louisa May Alcott novel, Greta Gerwig brings Little Women to the big screen with an all-star cast including Laura Dern and Meryl Streep. Unlike previous tellings of the story, Gerwig's version picks up in what would be considered the second volume of the books. Jo March (Saoirse Ronan) is a struggling 19th-century writer who is called home to the bedside of sick sister Beth (Eliza Scanlen). Through a series of flashbacks, we see how the pair grew up with sisters Meg (Emma Watson) and Amy (Florence Pugh). It's incredibly difficult to find any faults with this film - Gerwig's Little Women is warm, powerful and a vastly superior adaptation that will leave you thinking far more deeply about the original source material. Equally, if you have no previous knowledge of the narrative - even better - you're in for even more surprises. 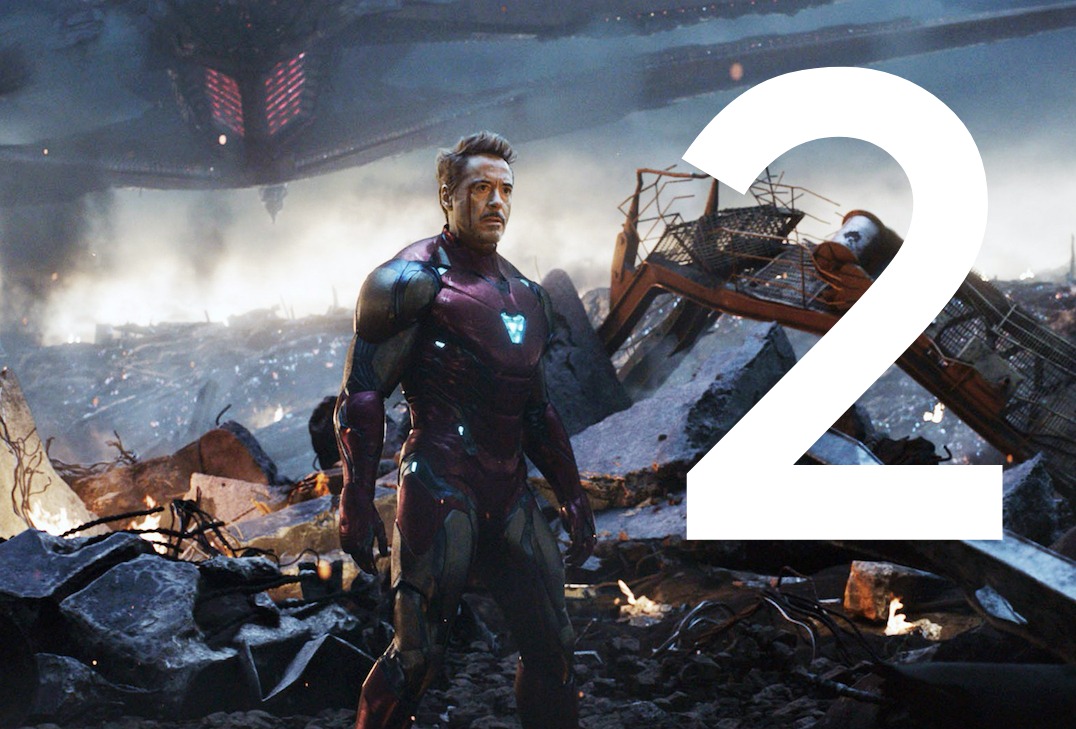 2. Avengers: Endgame (Anthony Russo and Joe Russo, 2019) - With the Russo Bros at the helm, Avengers: Endgame was always destined for success but this powerful and emotional end of an era broke all the box office records and our hearts. Endgames takes us an emotional rollercoaster as the remaining Avengers attempt to undo the devastation caused by the 'snap' and regain control the Infinity stones from Titan, Thanos. And, whilst some fans may have been left feeling somewhat unfulfilled or pondering alternative endings, (for the majority of film lovers) it was the perfect mix of nostalgia, humour and devastation. A tearful end of an era and blockbuster filmmaking at its best. 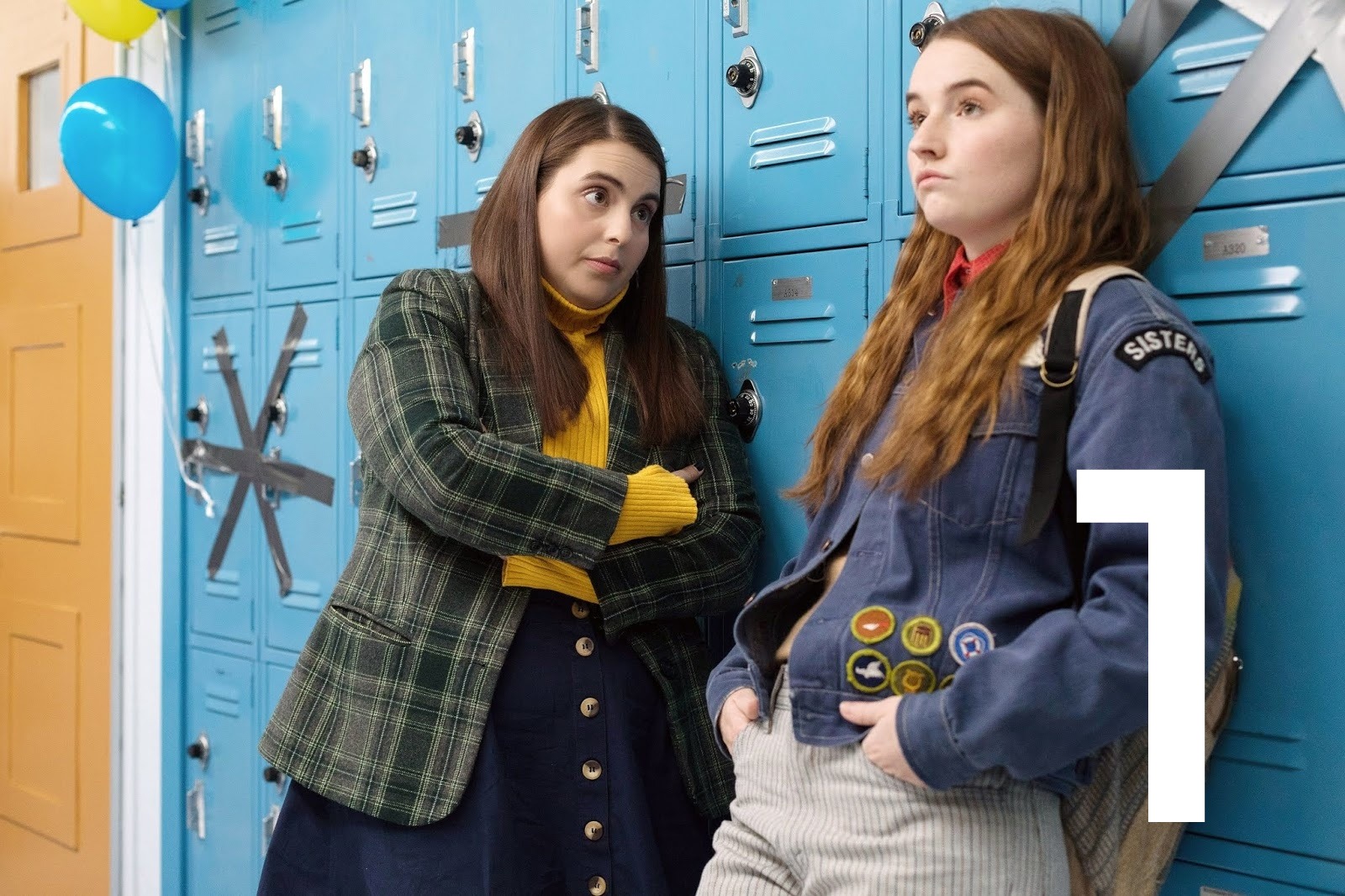 1. Booksmart (Olivia Wilde, 2019) - Olivia Wilde makes her directorial debut with this incredible coming-of-age comedy. Booksmart follows straight-A high school students Molly (Beanie Feldstein) and Amy (Kaitlyn Dever) who decide to break their no-party pact in the final 24 hours before graduation. Wilde does an incredible job in balancing moments of hilarity with the awkward and tender whilst Feldstein and Dever deliver flawless and funny performances. I laughed out loud, I teared up and I loved every minute of it - all 4 times I watched it. See this movie immediately, please.
__
Well, that's it for a really tricky top 10 films of 2019. I'm sure I might kick myself for the order or leaving some off the list at a later date but, for now, that's it. I spent far too much time rearranging before finally landing on it's current order. So, forgive me. Some honourable mentions also go to The Irishman (Martin Scorsese, 2019), Joker (Todd Phillips, 2019), Once Upon Time in Hollywood... (Quentin Tarantino, 2019) and The Souvenir (Joanna Hogg, 2019). But tell me, what do you make of my Top 10? Which films were your most loved of 2019? As always, I love reading your comments so please do share your thoughts with me.
Until next time film fans - a very happy new year,