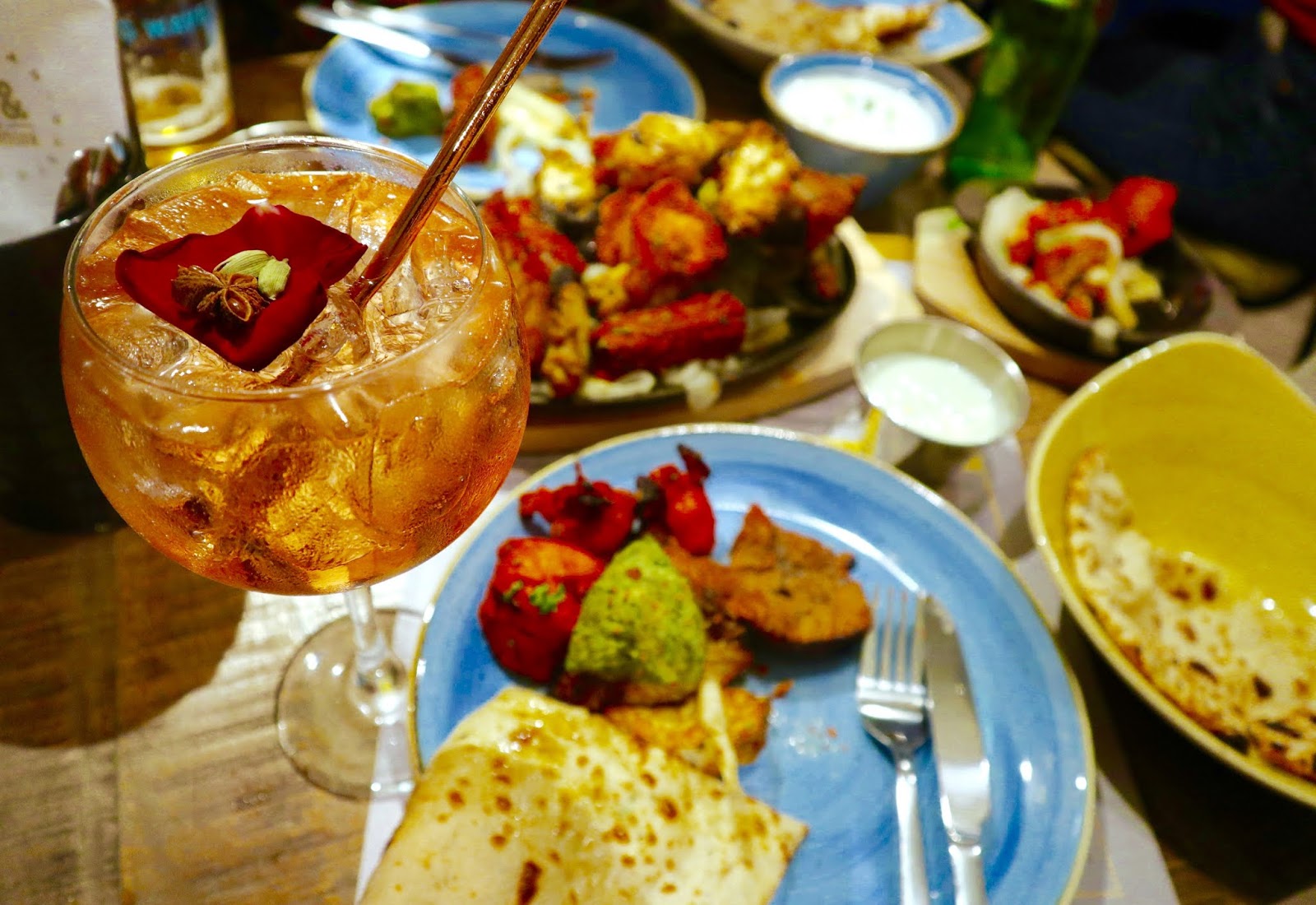 Last week, myself and Stevie were invited along to try out a brand new restaurant in Queensgate, Peterborough's city centre. Having recently moved to Stamford, about a 30-minute drive from town, we were excited to try out some of the (fairly) local cuisines and so headed along to check out Tap & Tandoor. 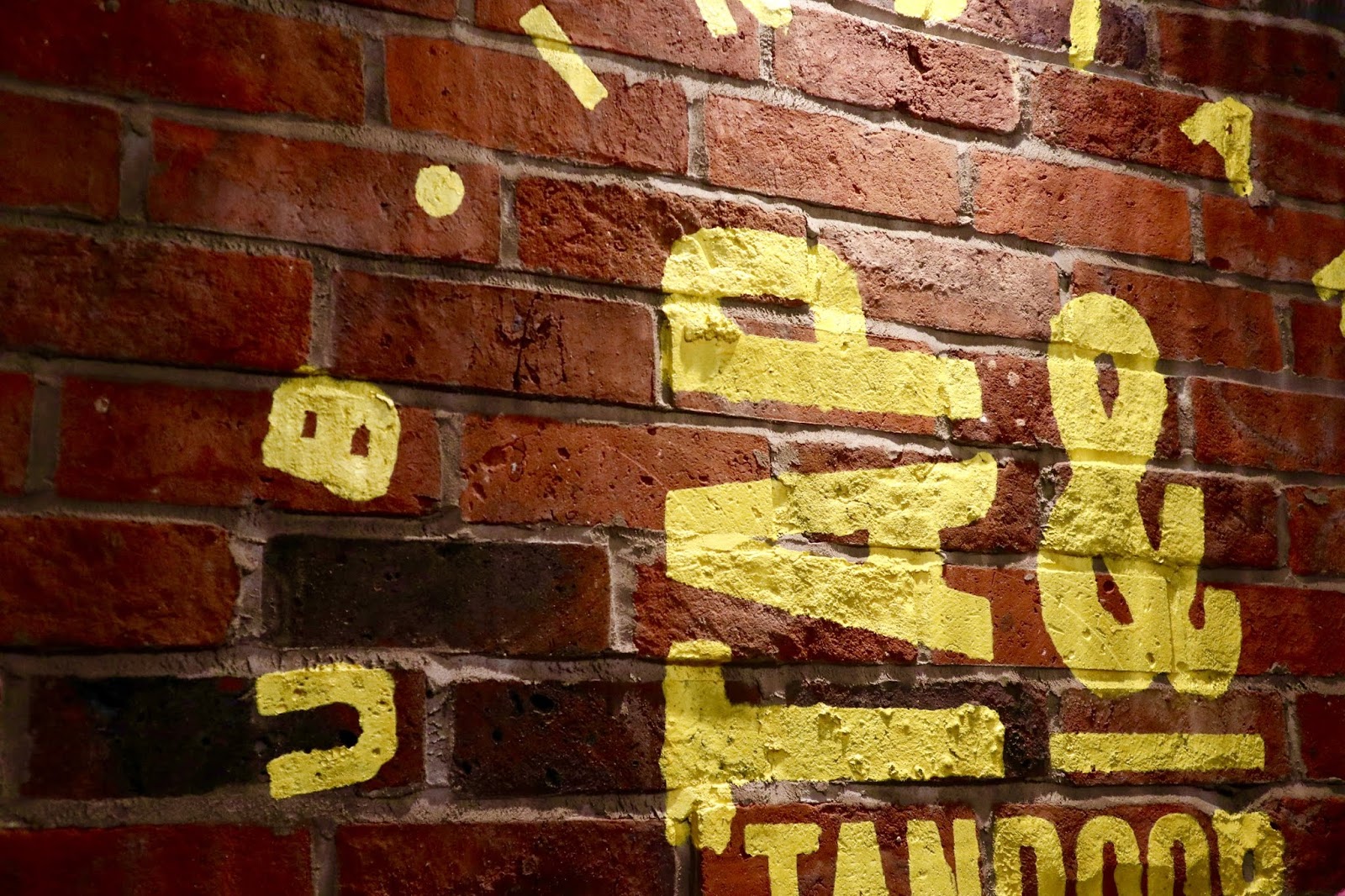 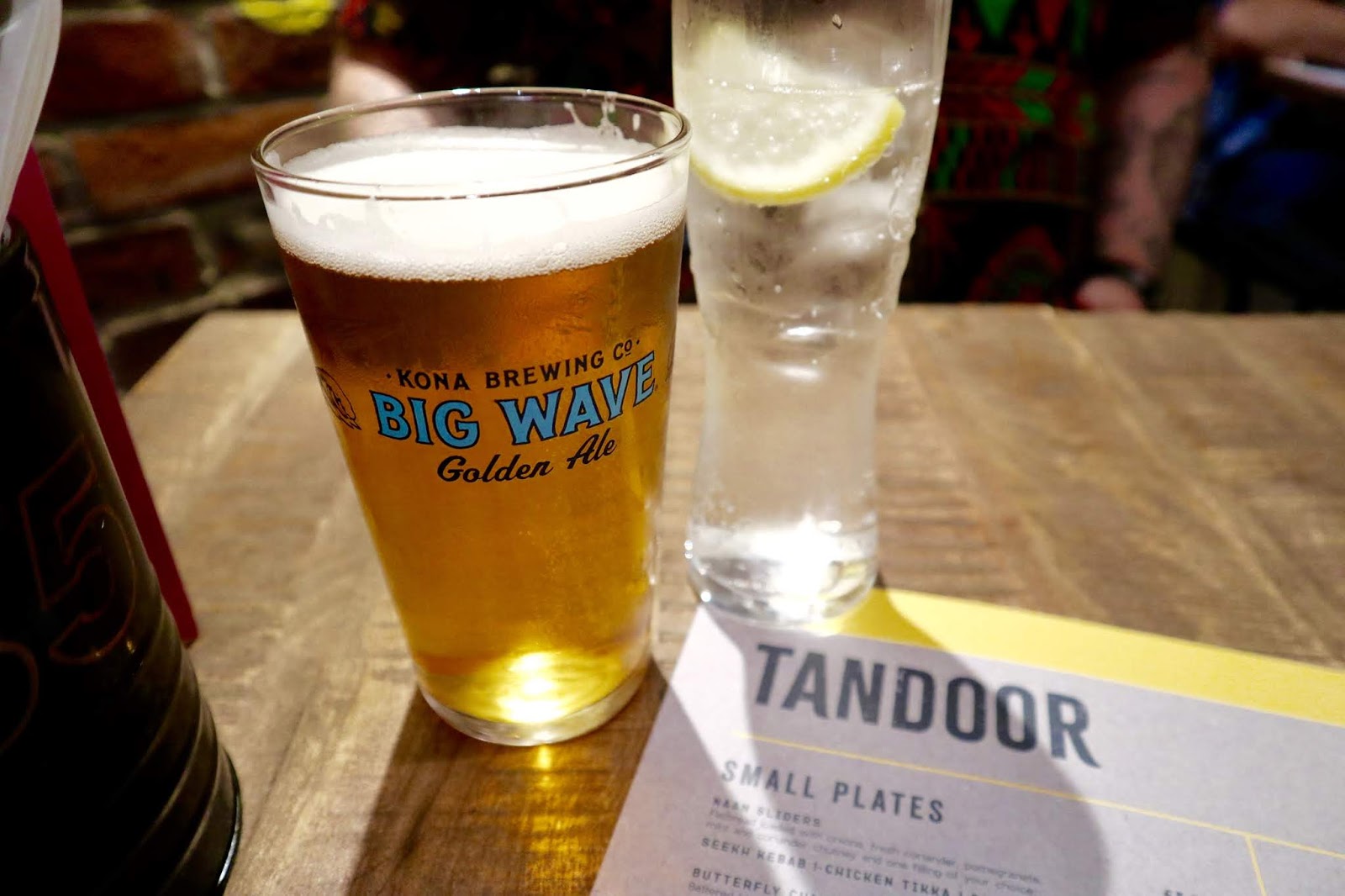 As you may have guessed from its title, Tap & Tandoor* is an independent Indian and gastropub offering craft beers and Indian dishes. Starting up in Solihull, they opened their second branch in Peterborough this July offering a mix of Asian comfort food, within a laid back, pub environment alongside a selection of craft beers and cocktails. For you local people, I'm told it takes up residence in Cumbergate, the former home to Carluccios which closed last year.

The kitchen uses free-range meat for the signature popular mixed grill but they also offer a selection of small plates and curries which, including vegetarian and vegan dishes. The beers, on the other hand, are sourced from breweries all across the UK and around the world - from Alcester based Purity to Kona Big Wave from Hawaii. 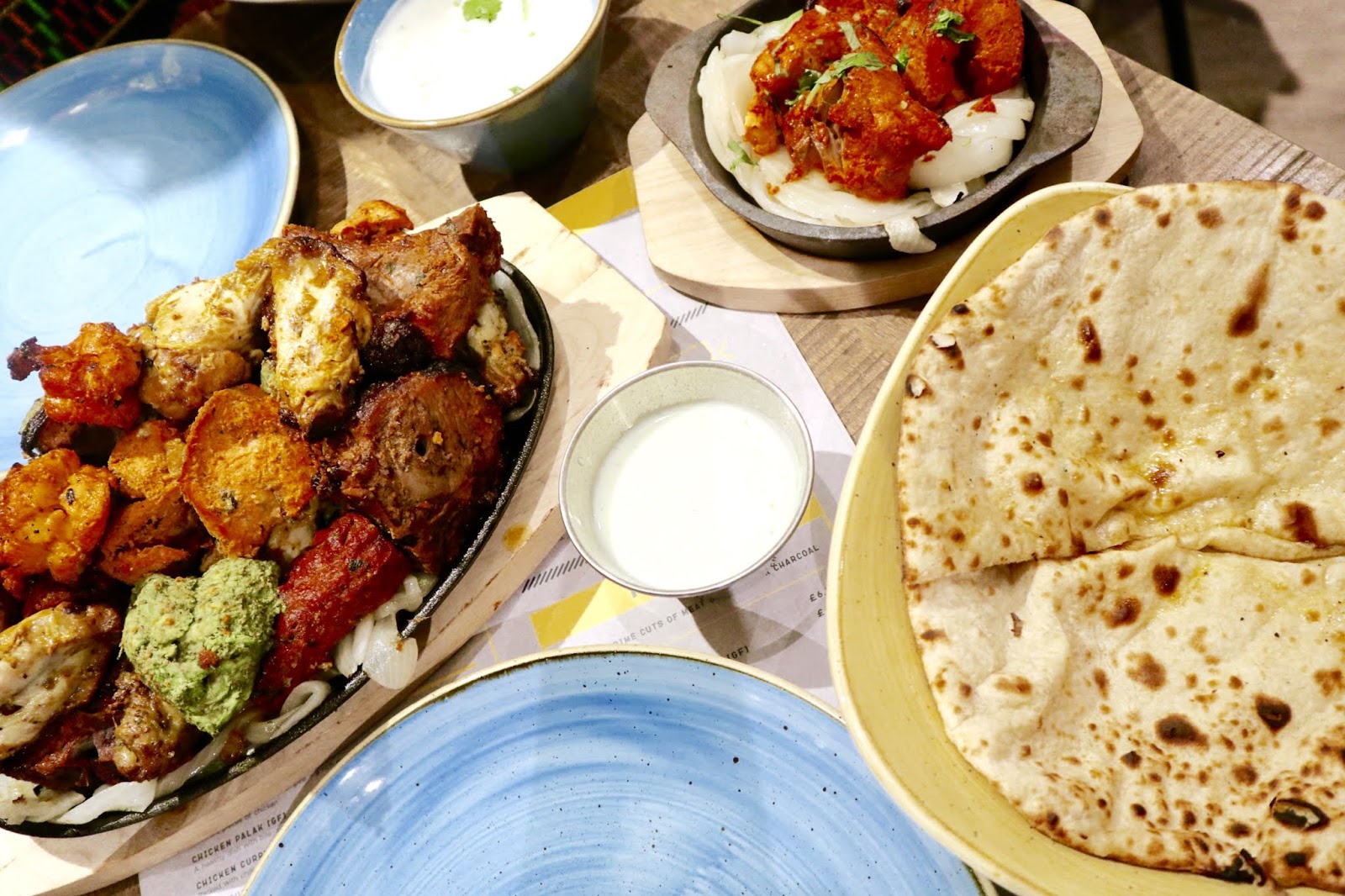 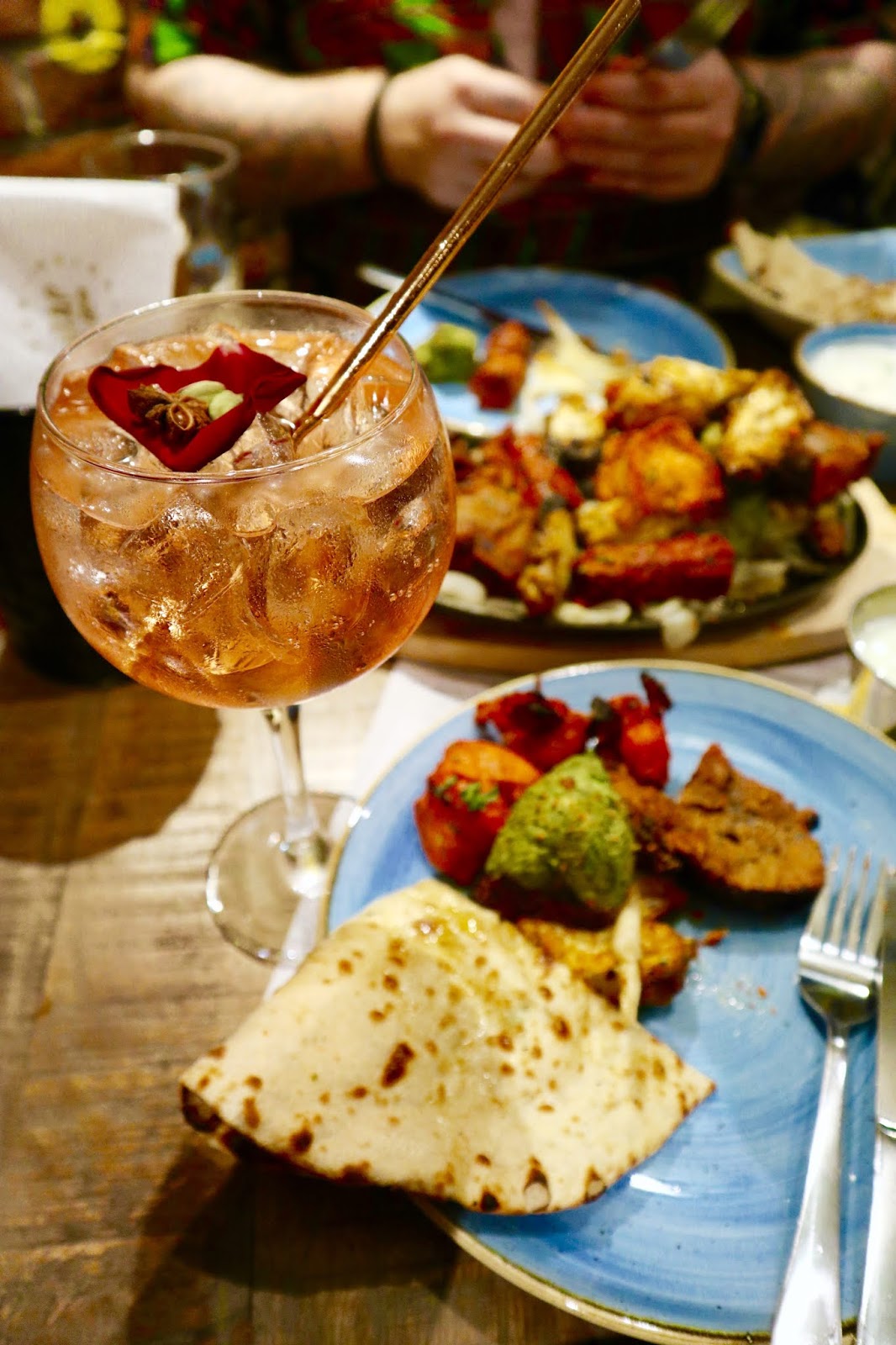 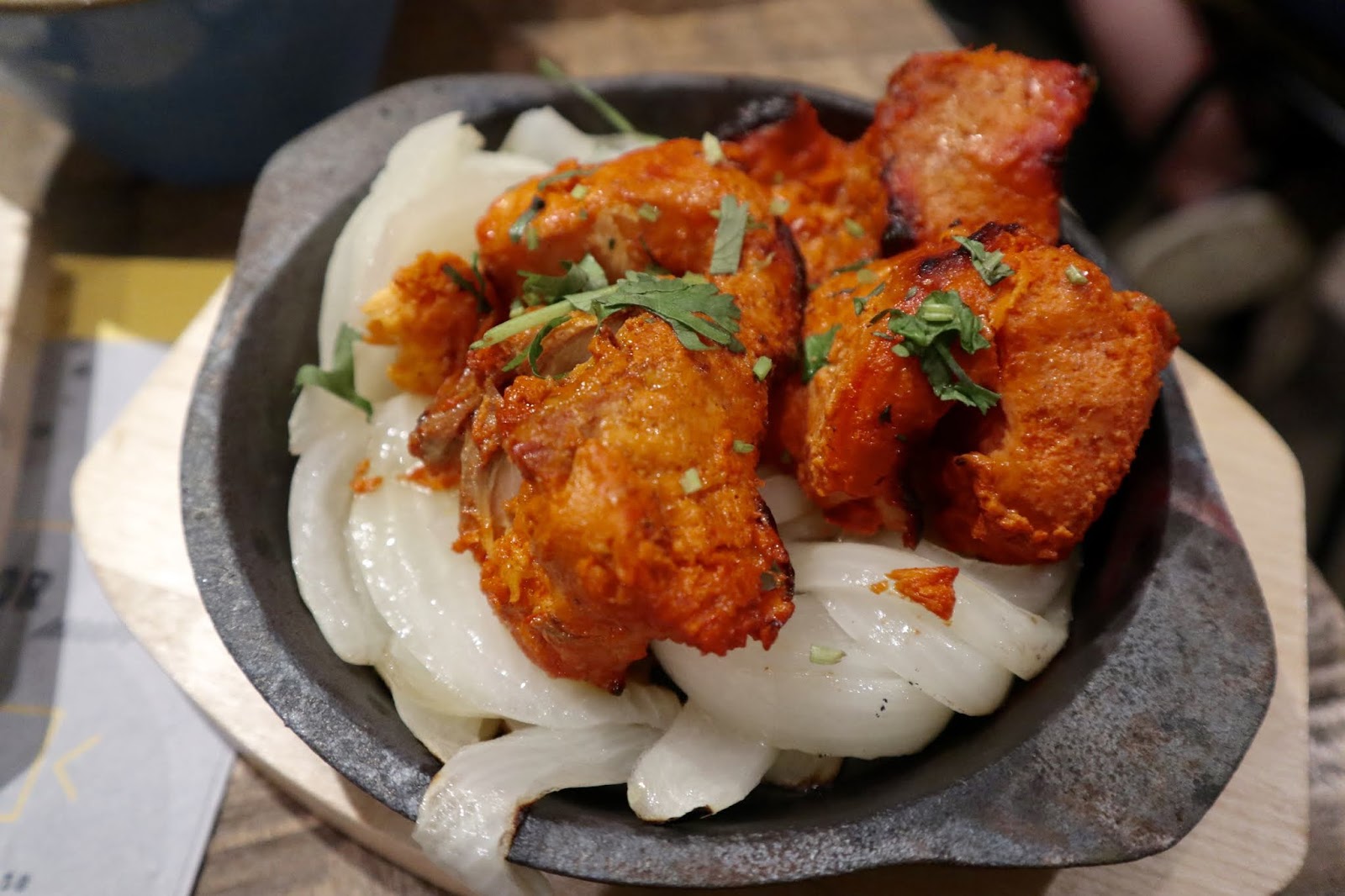 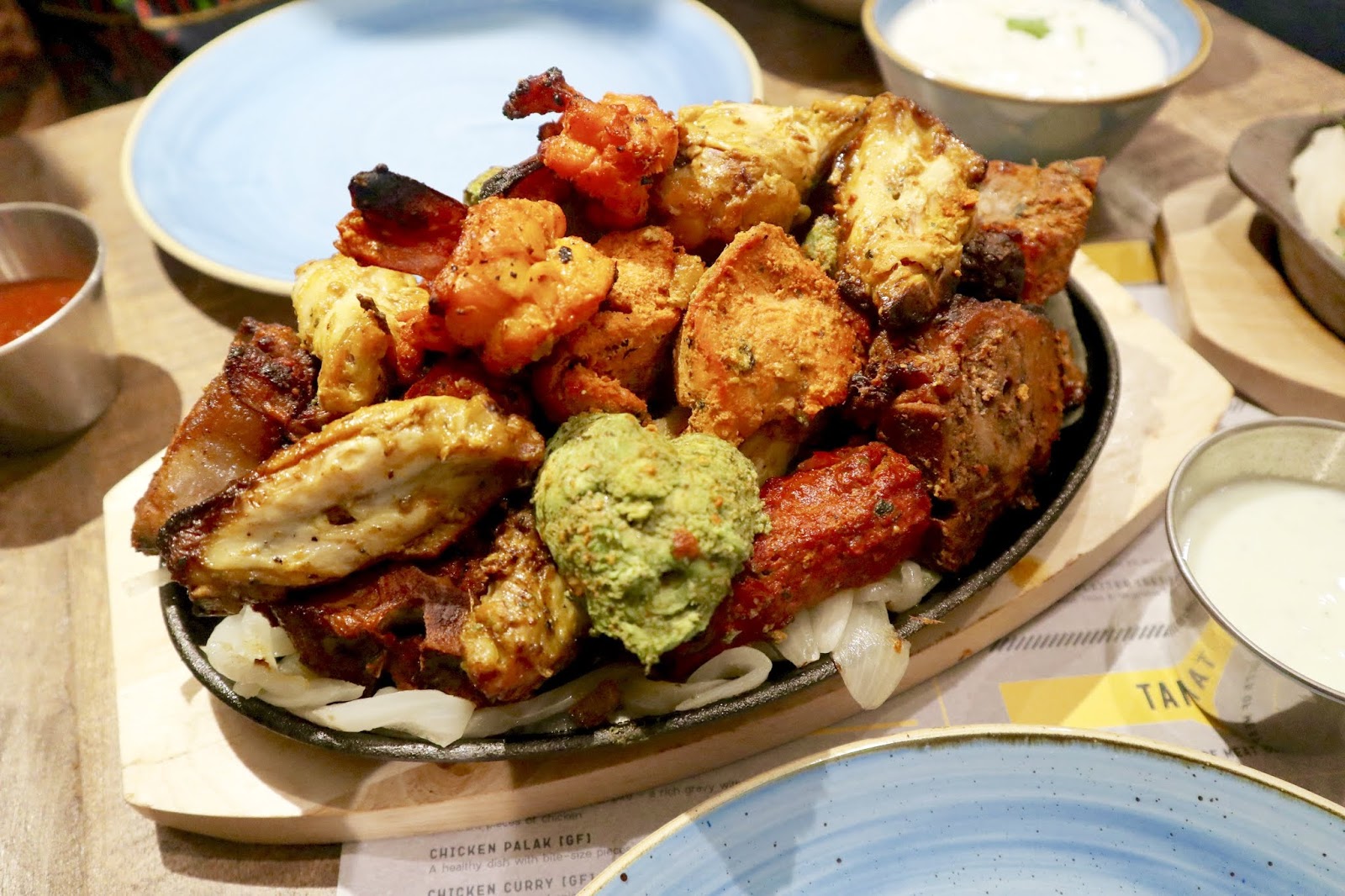 Despite being incredibly tempted by their small plates, we thought it only right to try the signature dishes Tap & Tandoor had to offer. We opted for a healthy helping of all the tandoori they had. As pictured above, we ordered the Tap & Tandoor Mixed Grill - a platter featuring a selection of free-range chicken tikka, chicken wings, seekh kebab and lamb chops. We upgraded ours to include the King Prawns and Salmon (mostly because I don't eat a lot of chicken and love seafood) and it was definitely worth doing. We topped it off with a side of naan bread and an extra helping of the salmon tikka. As you can probably guess, we polished this all off very nicely and it was very tasty. I think, however, that if we were to visit again that I would try a curry as this was a lot of meat and very stodgy. 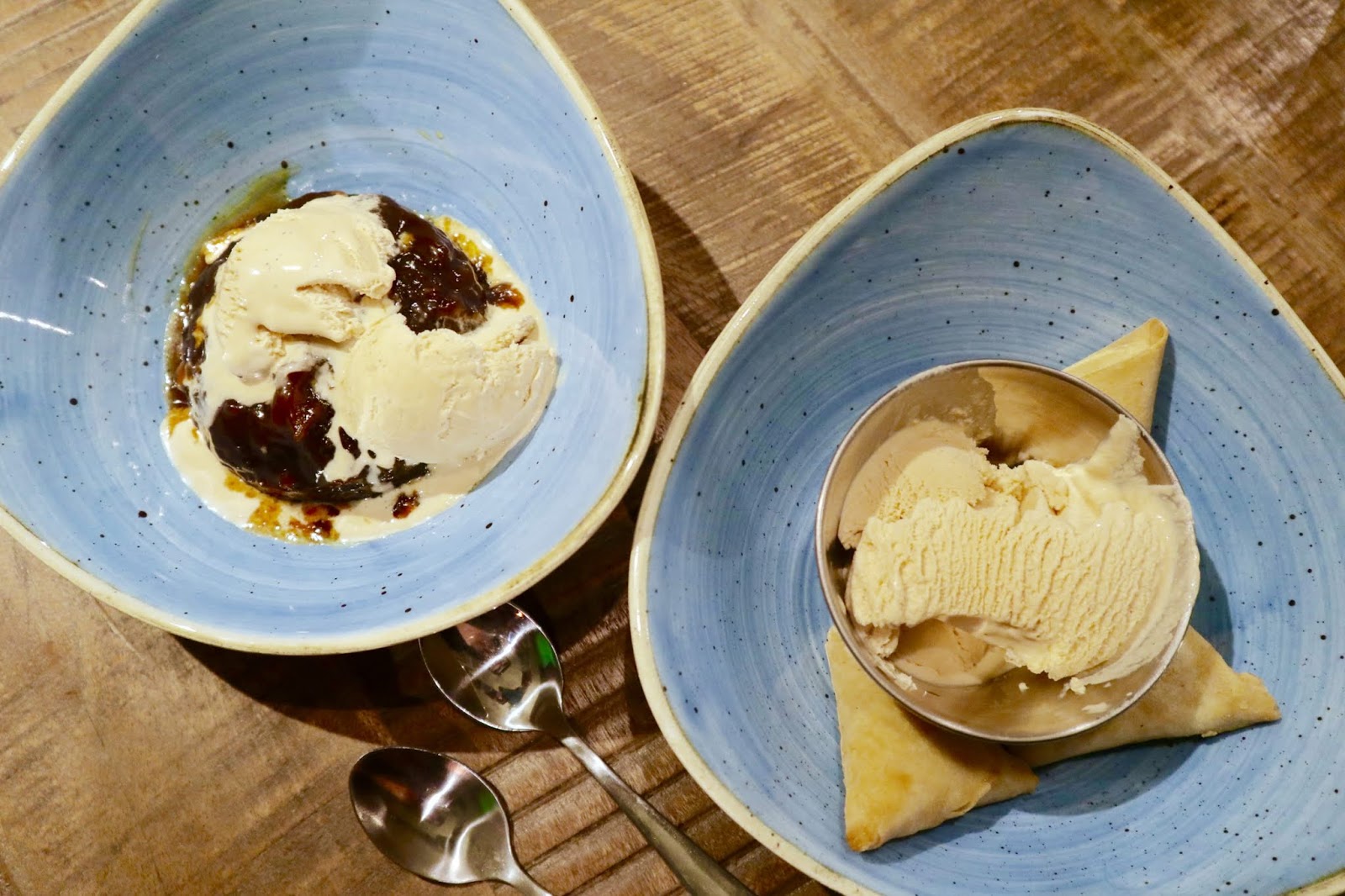 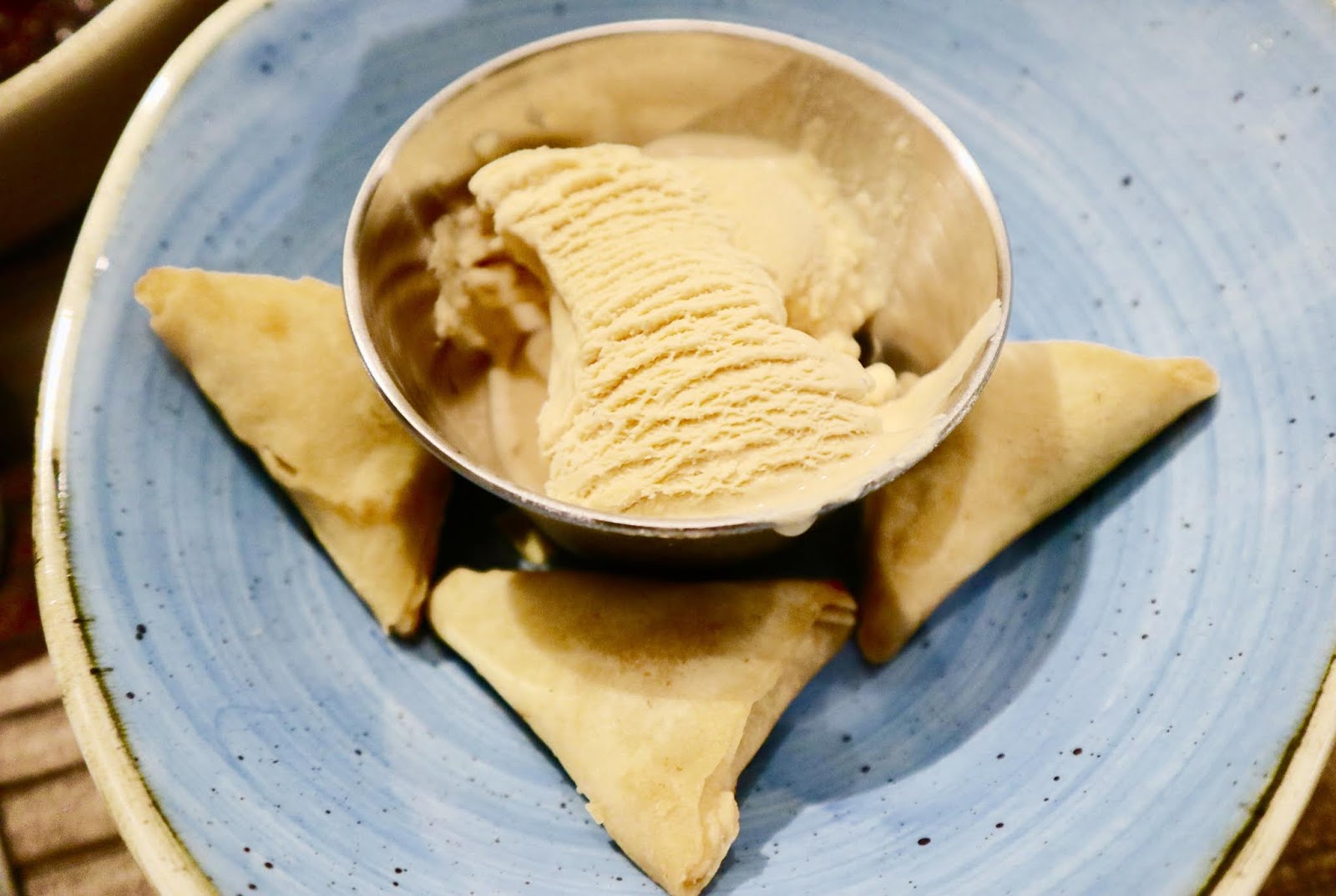 I was in much need of something sweet after all that savoury. Thankfully, the desserts at Tap & Tandoor are a perfect size so you can always make room. Pictured above are the Sticky Toffee Pudding (a British favourite with an Indian twist) and the Apple and Cinnamon Samosa (filo pastry filled with apple and cinnamon, served with chai flavoured ice cream). Personally, I couldn't really taste much of the apple in the samosas but they were still very tasty and the ice cream made for a great palette-cleanser. Stevie's dessert of the sticky toffee pudding, however, might have not looked like much but was very delicious and just the right portion size. 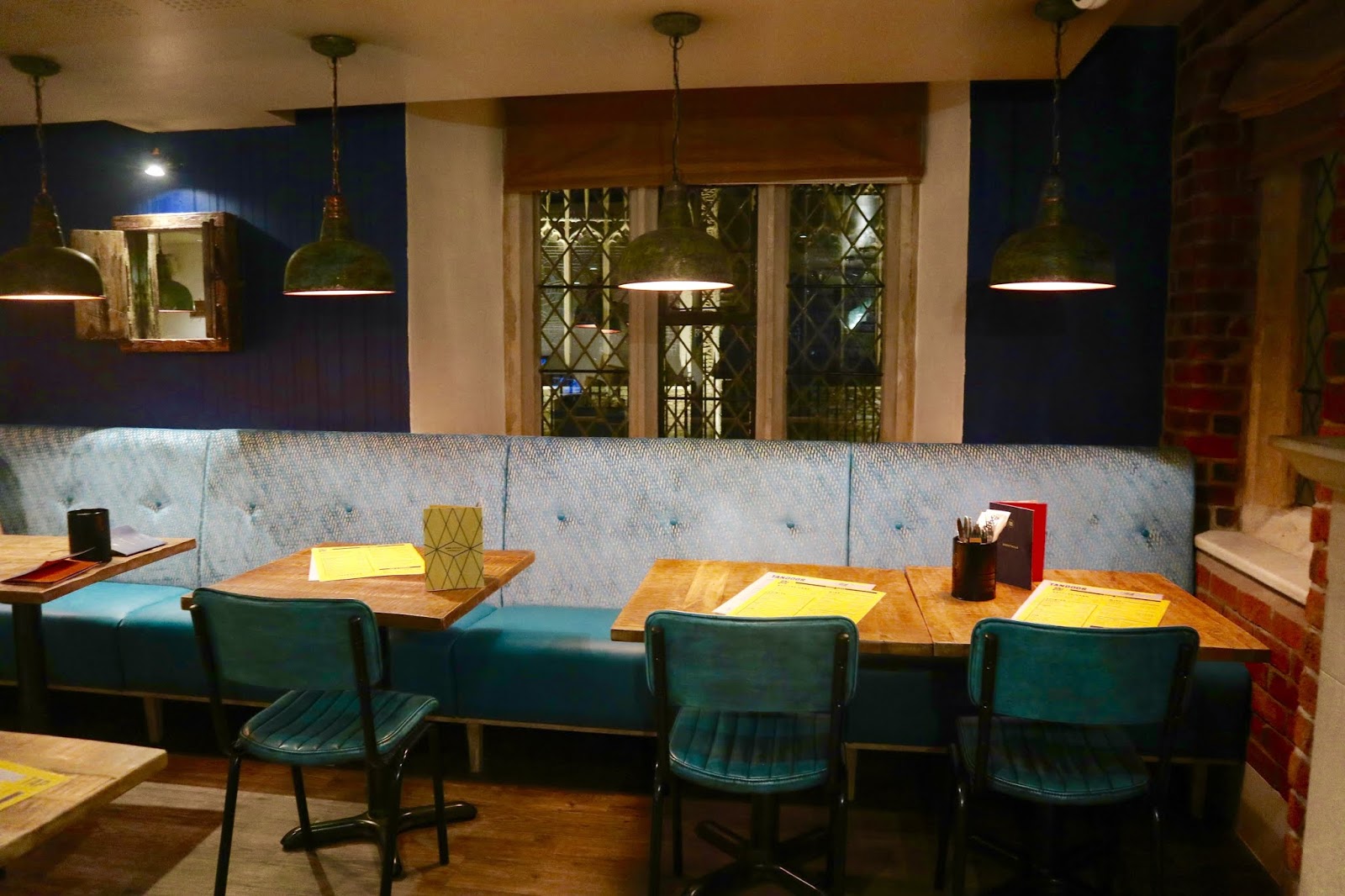 I imagine that this is the perfect place for groups of people looking to go out but in a more relaxed setting. Looking around the room, there were young couples on date night, groups of women having a girly catch up with cocktails; and a few larger groups of men there to watch the football alongside some standard but good food. If we went back, I would certainly like to try more of what their menu has to offer.

In terms of the craft beers on offer, these are quite limited in their selection, however, I like that they change these up every now and then so you can come back to try new ones. The service was also good and mirrors the relaxed vibe of the restaurant. So if you're looking for a step-up from the pub and a wide selection of Indian grub, this is the place.

A huge thanks to Tap & Tandoor for allowing myself and Stevie to come along and sample their delights. Being new to the area, it's always nice to find fresh places to eat and for date night. But tell me, have you been to Tap & Tandoor yet? What are some of your favourite Indian dishes? As always, I love reading your comments so please do let me know your thoughts below.

Until next time foodie lovers,

*Disclaimer - The food in this post was complimentary in return for an honest review. As usual, all thoughts are my own and are not influenced by the brand.