Tags: film horror bill
September 10th 2019
View original
Twenty-seven years after terrorising the Losers' Club in the town of Derry, Pennywise (Bill Skarsgård) is back to wreak havoc once more. Fearing the threat, Mike Hanlon (Isaiah Mustafa) calls upon the estranged members of the club to make good on their promise to return and defeat the  evil dancing clown.

You may remember from my review at the time that IT (2017) was part one of an adaptation of the beloved Stephen King book; following in the footsteps of the affectionately remembered (but poorly aged) TV movie starring Tim Curry. Leaning on the popular wave of 1980s nostalgia and drawing influence from the likes of Goonies, Stand By Me and Stranger Things hype, the film was a worthy reworking but not entirely without its flaws. Unsurprisingly, IT went on to become horror's biggest box office smash to date and, as promised, has now birthed Chapter Two.

Before we reunite with the Losers, IT Chapter Two begins us back to a carnival in Derry, but to witness a group of thugs as they viciously assault a gay couple. Arguably, this attack is far more life-like or brutal than anything we see in the first film, but shows us that the gloves are off for Muschietti this time around. This horrific opening not only demonstrates the backward attitudes of the town (which clearly haven't evolved in twenty-seven years), but a real-life social and political context - as every good horror should. These opening minutes leave you shaken before the film has even begun and sets Muschietti's tone for the following two hours and fifty minutes.

MJ Unpacked Returns To Las Vegas For …
Historic Investment in Partnerships f…
The New York Botanical Garden
US seeks to recharge semiconductor in…
Barcelona plan to offer €9 million in…
With a shocking introduction out of the way, we pick up with the grown-up Losers' Club; each with their successes and struggles. Realising Pennywise has returned, Mike (Mustafa) surprises each of the Losers with the terrible news and summons them back to Derry. Of course, each is reluctant after three decades apart and can hardly remember the events of their childhood. From Bill Hader’s Richie, now a professional comedian, Eddie (James Ransone) in Risk Assessment, to Jessica Chastain’s Beverly and her abusive husband and James McAvoy's Hollywood screenwriter, Bill. The successes of each character is clear, but all of them left something behind in Derry. Delightfully, the re-casting of the Losers' Club couldn't be more spot on and, as we're taken on their individual introductions, they feel instantly lived-in and authentic from the off.

One of the film's biggest successes is its ability to evoke nostalgia. With countless nods to horror classics (from the ripped shower curtain of Psycho to body horror reminiscent of The Thing), Chapter Two is undoubtably made by a horror fanatic, for horror fanatics. Beyond all the gore, 4500 gallons of fake blood and body horror, though, it also wonderfully embodies the characteristics of the beloved family-friendly fantasies of Spielberg. From Goonies cave action in the finale, to Native American mythology seen in Poltergeist, Muschietti draws heavily some of Spielberg's action adventure favourites. This, in-turn, injects plenty of heart in to the narrative - a welcome relief from some of the more grotesque scenes.

Another great thing about Chapter Two is its cast - for the most part. Besides some uncanny resemblances to their younger counterparts, Chastain's Beverly and McAvoy's Bill in particular, it is Bill Hader who undoubtably steals the show. In Stephen King’s original novel, Richie goes on to be a radio DJ living in Beverly Hills, but in the Chapter Two adaption, he’s a famous, wise-cracking stand-up comedian. His performance is both ridiculous and fun but still levelled with plenty of heart - a role which Hader carries with ease. Furthermore, Hader brings a somewhat manic maturity to the character that’s endlessly likeable - far less irritating than young Richie (Finn Wolfhard) who's smart mouth can be purposefully overkill. 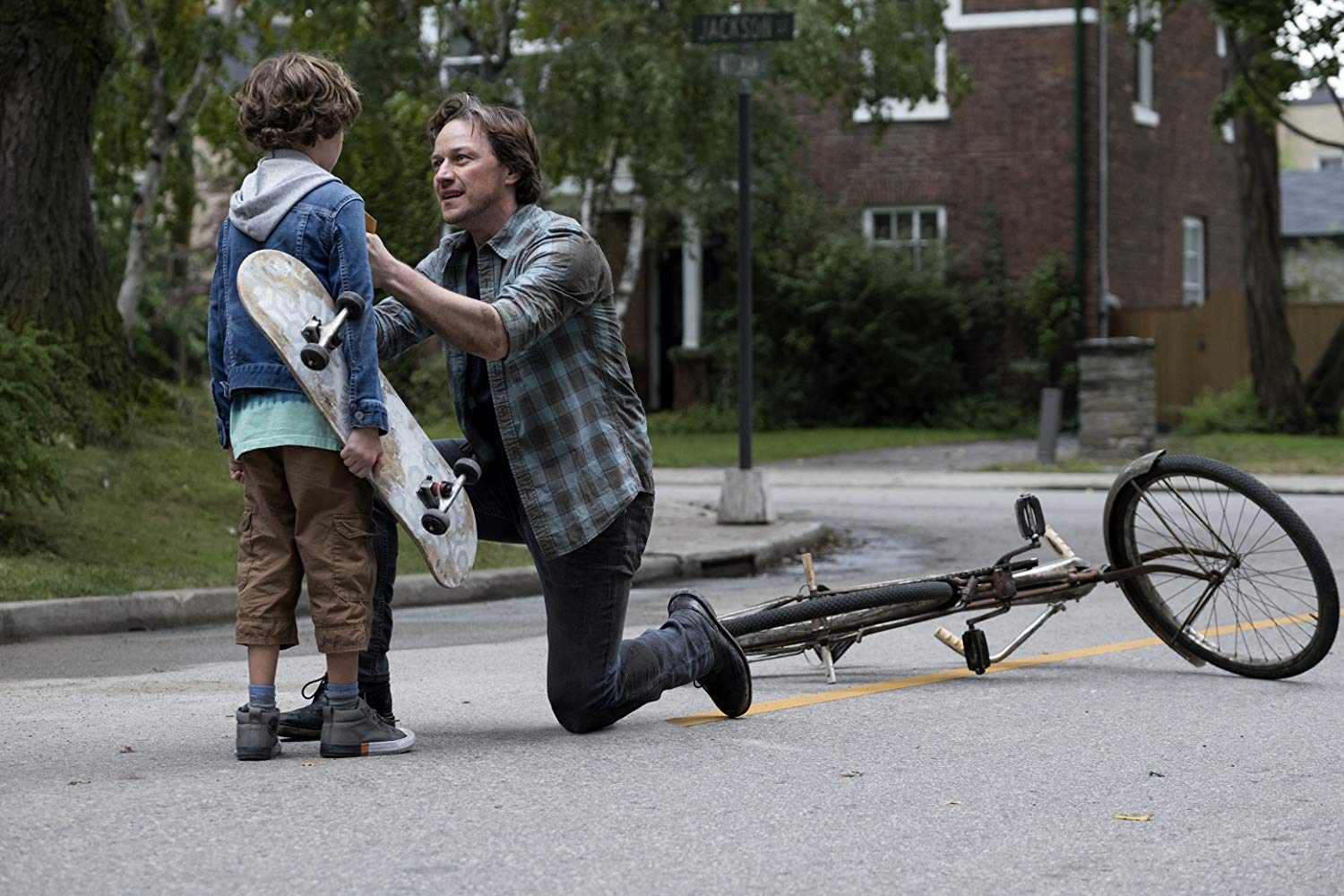 It goes without saying, of course, that the role of Pennywise fits Bill Skarsgård like a glove. His utterly creepy presence is sorely missed when he’s off screen but knowing he could appear at any moment adds to the thrill. With a performance that is so physically demanding, Skarsgård consistently manages to find that sweet spot between being terrifying and amusing. It's clear that he has successfully created an iconic horror villain for the ages.

Through no fault of Skarsgård though, the rules seem to have changed in terms of what Pennywise can do within the realms of his supernatural abilities. In the first film it was implied that only children could see him and the adults of Derry have no memory of Pennywise. He channels your darkest fears and presents himself through a series of strange, vivid ways. But in Chapter Two, Mike has not forgotten - claiming it to be because he "never left". It seems that this time around no one is safe - even the adults and it's never explained. Unfortunately, this causes several plot holes. Pennywise's omniscience and omnipresence seems to lack consistency, and the lines of what can actually kill him become increasingly blurred. My advice would be to not look in to it too deeply.
There are some parts of IT Chapter Two that border on the down-right silly. The Native American subplot, though it exists in the source material, is absurd and feels like an attempt to cram in as much as possible within the narrative. This isn't helped any further by some of the cheesy dialogue given to Mike and Bill (McAvoy) throughout. It adds nothing to the plot other than an exaggerated excuse to separate the group. Whilst separating the characters so that they can have their own visions works well, this significantly lengthens the running time, taking the film close to 3 hours. Now whilst that's not always a bad thing, it feels lengthy and you can't help but wonder if another trip to the editing suite would have tightened it up a bit.

Ultimately, it is the individual moments of true terror that are most notable in this film. From Beverly's visit to her childhood home that is sure to put you off befriending little old ladies for life, to Richie's reunion with Pennywise, there are real thrills to be found. Unfortunately, it feels repetitive and predictable - particularly with the Georgie storyline and Mike's cliches. Though, arguably this makes for easy viewing for avid horror lovers.

It Chapter Two is a solid horror - even if it is a little rough around the edges by comparison to its prequel. There are moments of laughter, heart and real scares though don't go looking for anything new from it's narrative; which feels very much like it is trying to fit in far too much. The lengthy running time could easily have been scaled back though it is Bill Hader that really brings this one home.

___
Well, that's my review of IT Chapter Two - have you seen it yet? What are your thoughts? I truly believe that if you've seen and enjoyed the first film then you'll love this one too. And Bill Hader alone is the only reason you'll need to see this film. As always, I love reading your comments so please do let me know your thoughts below. A huge thanks for Warner Bros. for allowing me to attend the multimedia screening of this ahead of release - but as always all reviews are my own opinions and are not influenced by the brand.