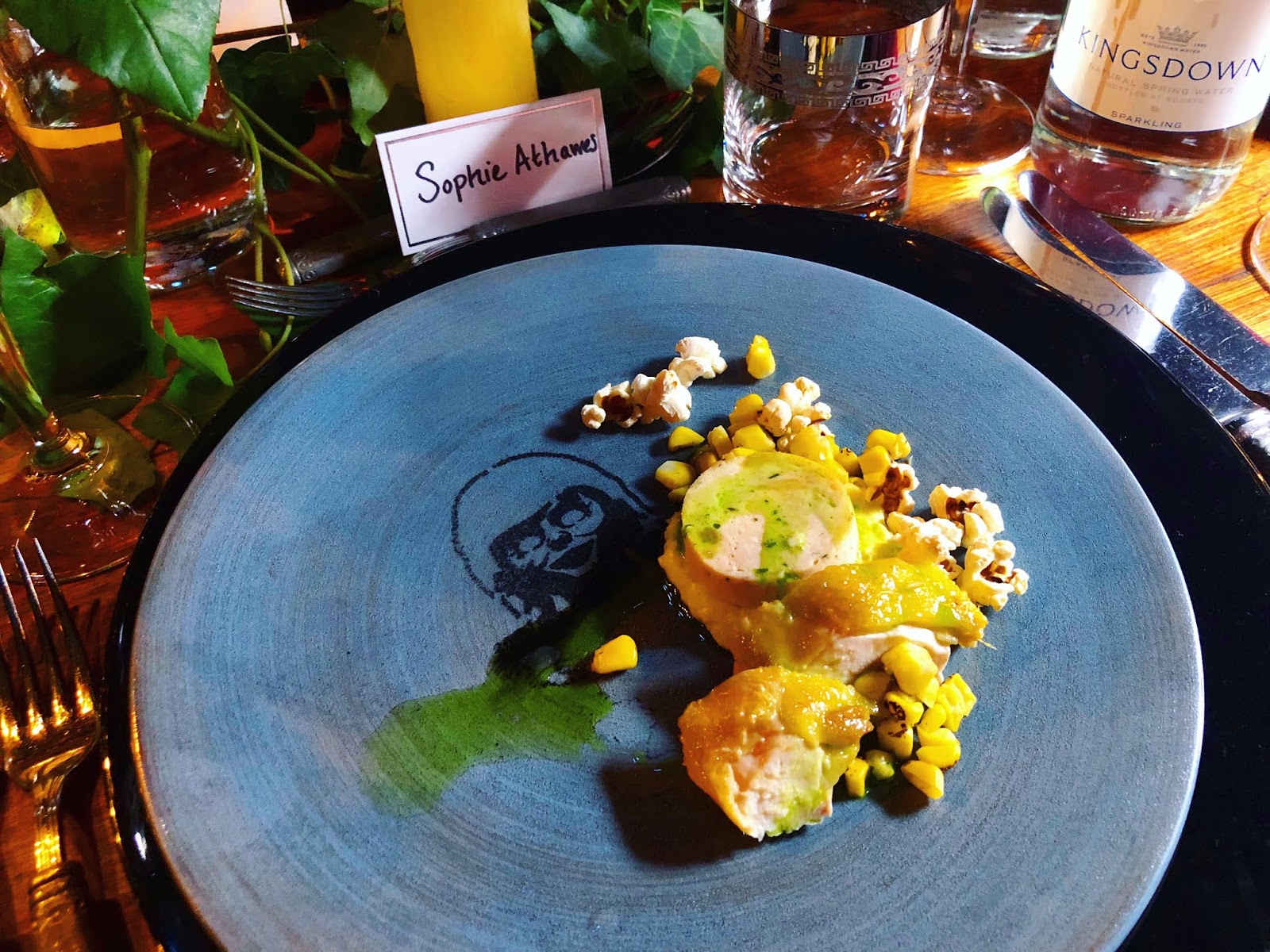 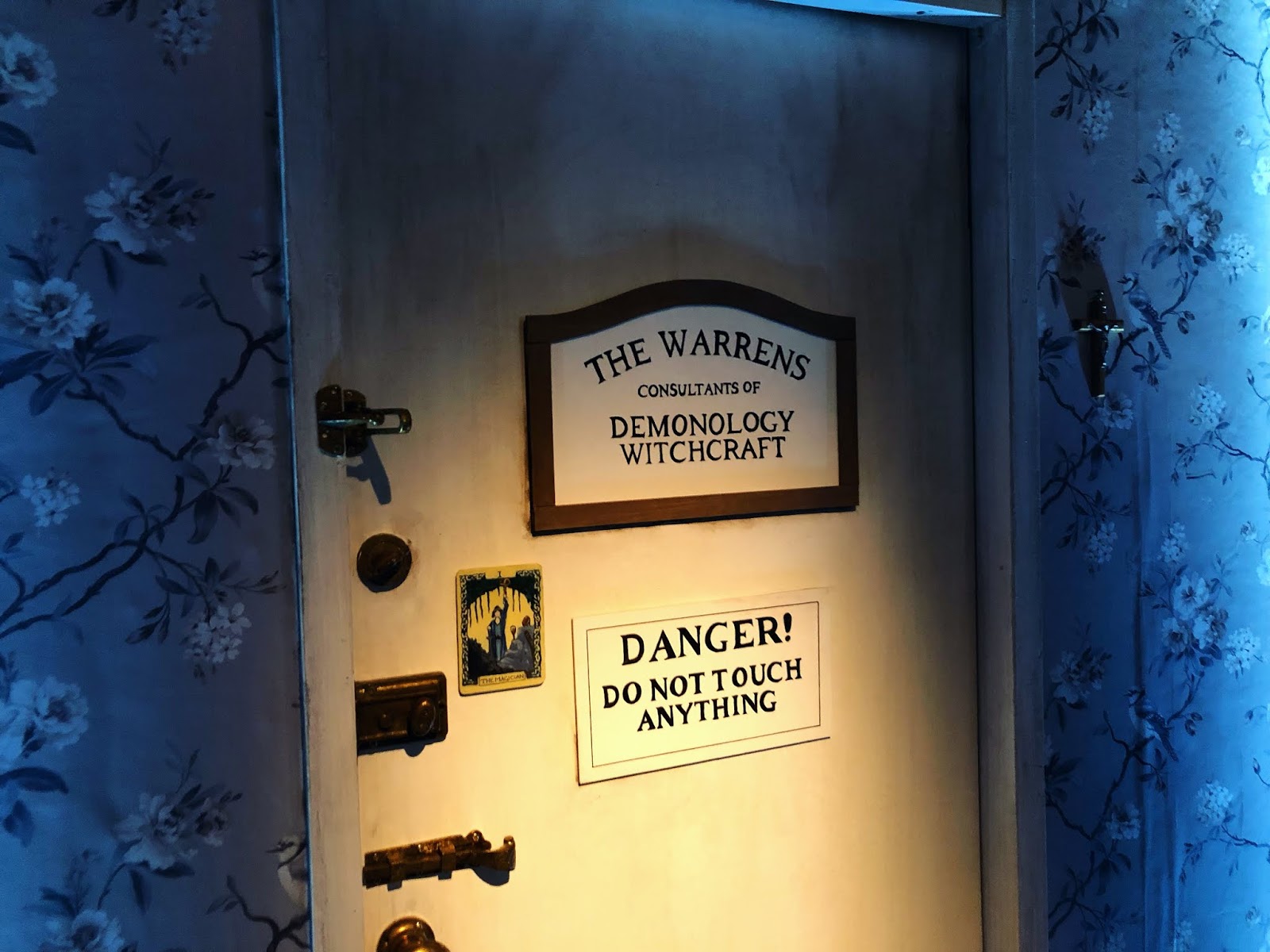 Firstly I'd like to apologise for the iPhone photos used in this post. I've always said I would never do such a thing but, sadly, my camera decided to freak out on me on arrival to this event and so needs must. But anyway - located inside the Welsh Chapel on Shaftesbury Avenue (essentially an abandoned church), we were invited to a spooky candle lit dinner unlike any other - with artifacts lurking behind every curtain and Annabelle as our guest of honour. 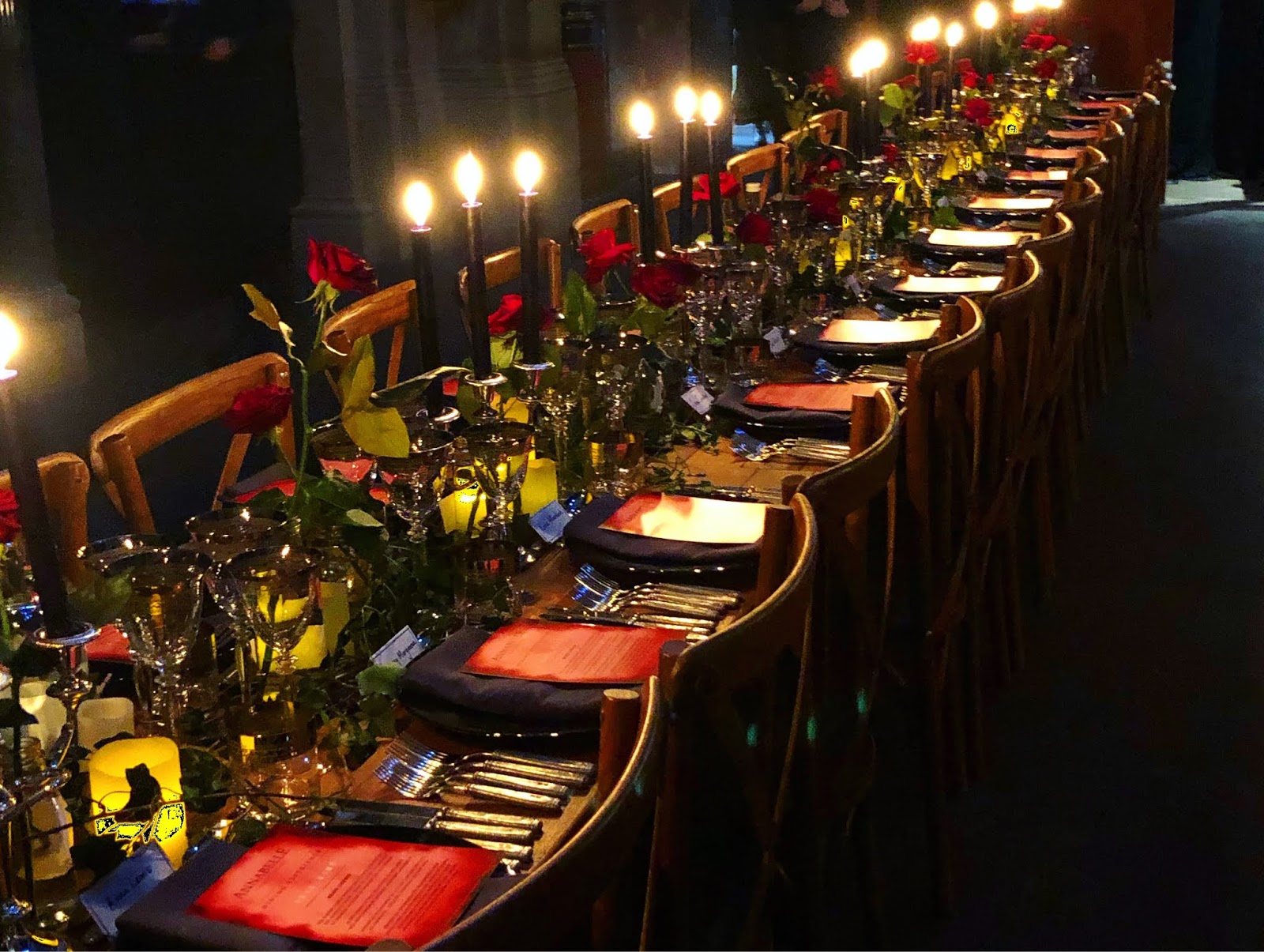 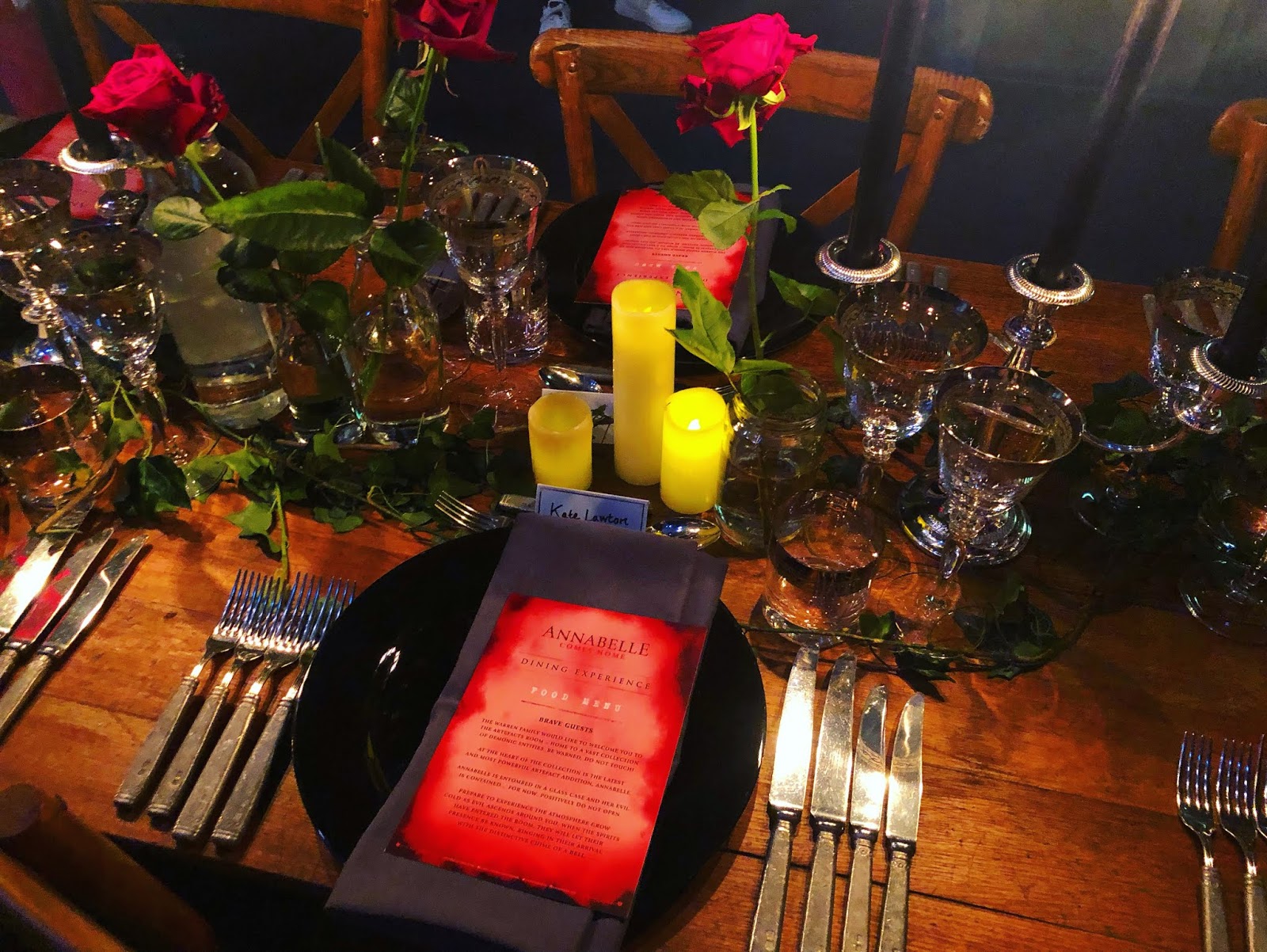 Having been welcomed in to the Warren's artifacts room with cocktails, we took our places, with Annabelle locked securely in her case at the head of the tables (or so we thought). With each bump in the darkness or reveal of an artifact, came another course and we were treated to a showcase of weird and wonderful dishes - each with a twist. 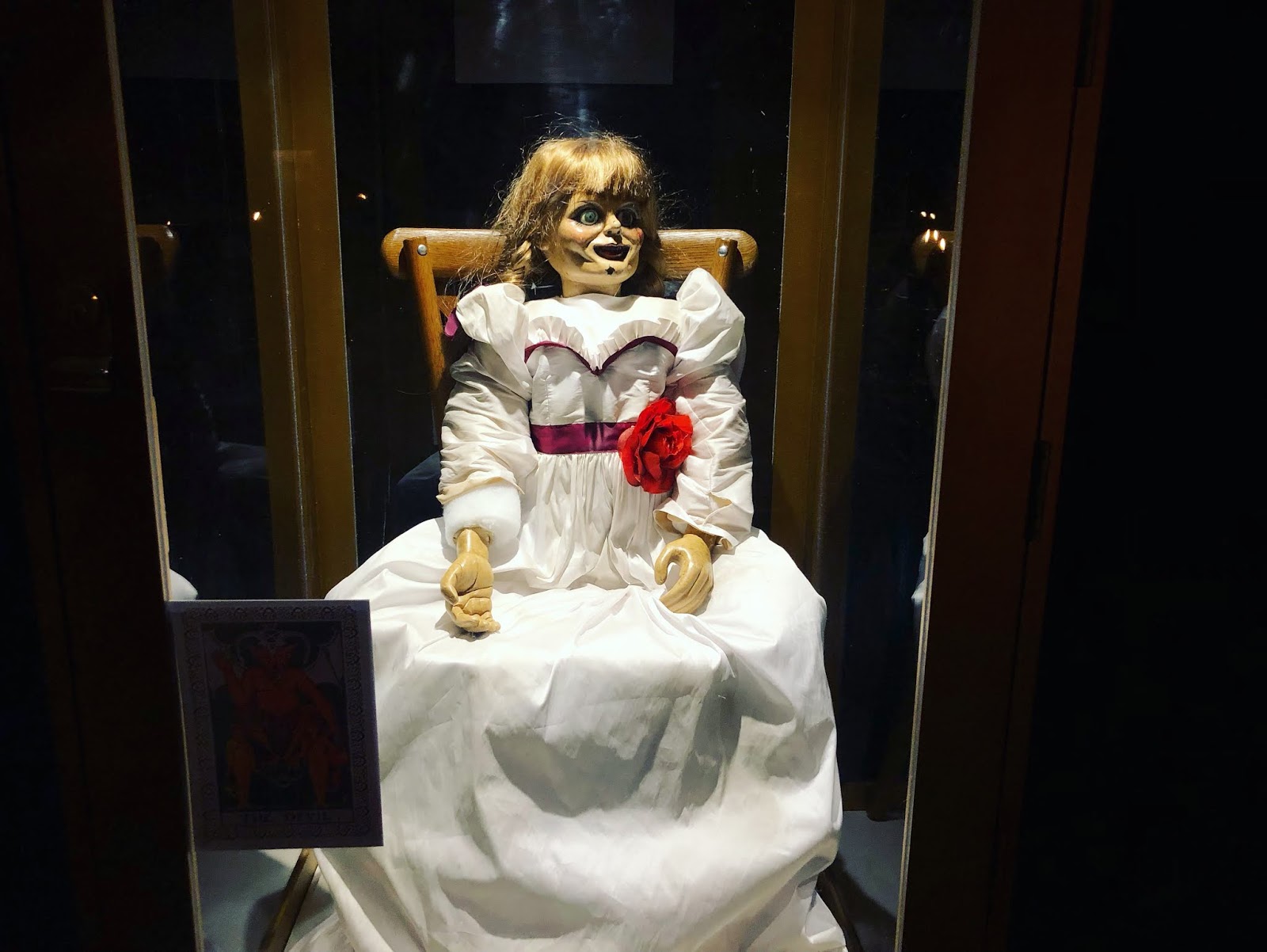 Annabelle Comes Home sees the return of demonic beacon, Annabelle the doll. Determined to keep Annabelle locked safely away, Ed and Lorraine Warren (Patrick Wilson and Vera Farmiga) keep her contained with their infamous artifacts room - in a glass case marked "Positively Do Not Open". However, when a babysitter's melding friend starts snooping around, the doll is let out and awakens the room's evil spirits. What follows is an unholy night of terror for the couple's 10-year-old daughter (Mckenna Grace) and her babysitter.

The film itself is a welcomed addition to the Conjuring Universe. As the seventh installment in the franchise, it follows somewhat of a 'dip' from The Nun (Corin Hardy, 2018) - which, though financially a success, received sub-par reviews; and The Curse of La Llorona (Michael Chaves, 2019) as the lowest performing film in the series. Whilst Annabelle Comes Home may not be considered 'scary' by hardened  horror veterans, it does get Warner back on track with the style and creepiness of the original Conjuring films which make them so enjoyable. 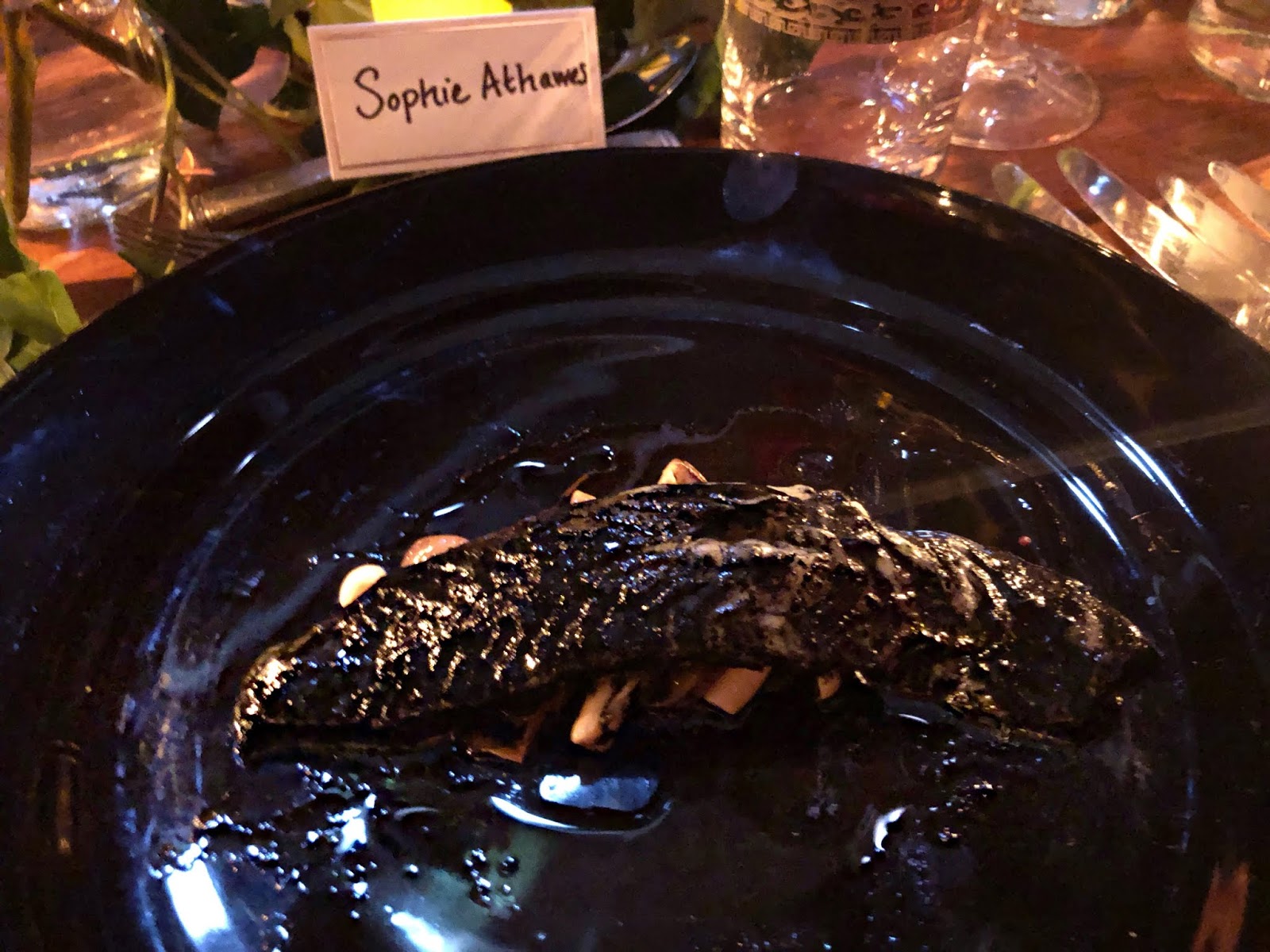 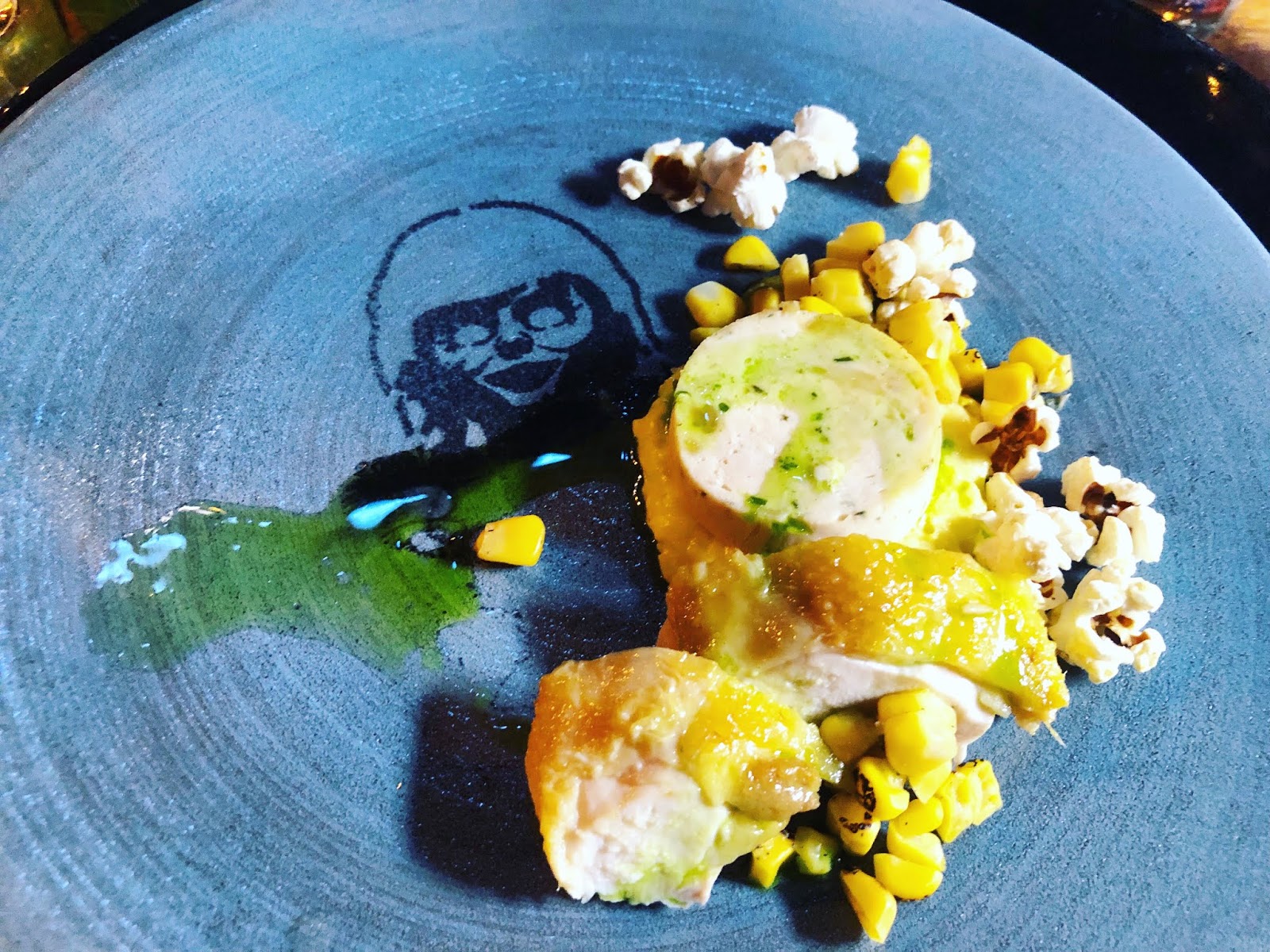 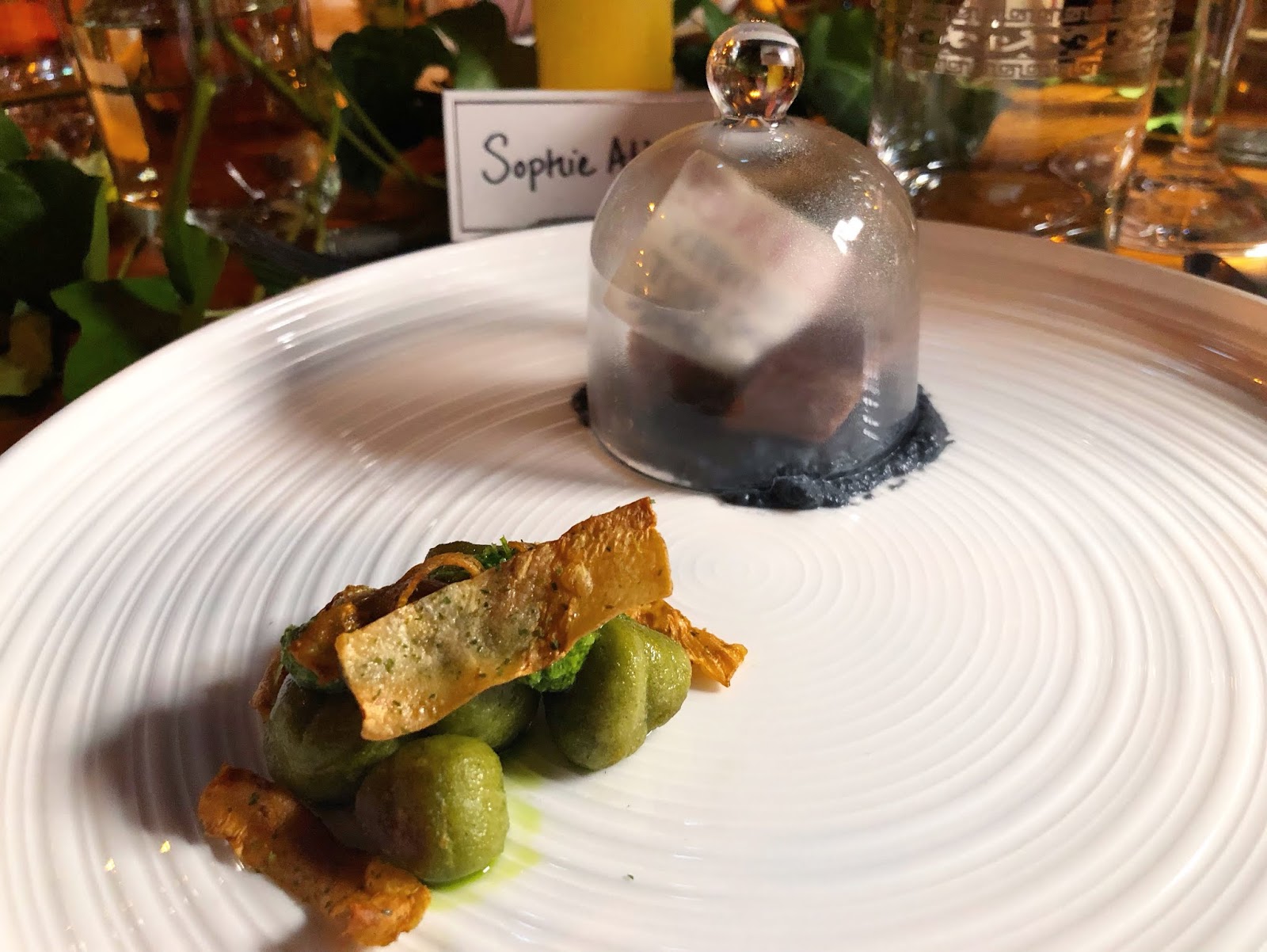 But enough about the film - let's talk food. I was in awe of the menu, and not just the food itself but the positioning and detail that went in to each and every plate. Take a look at the menu... 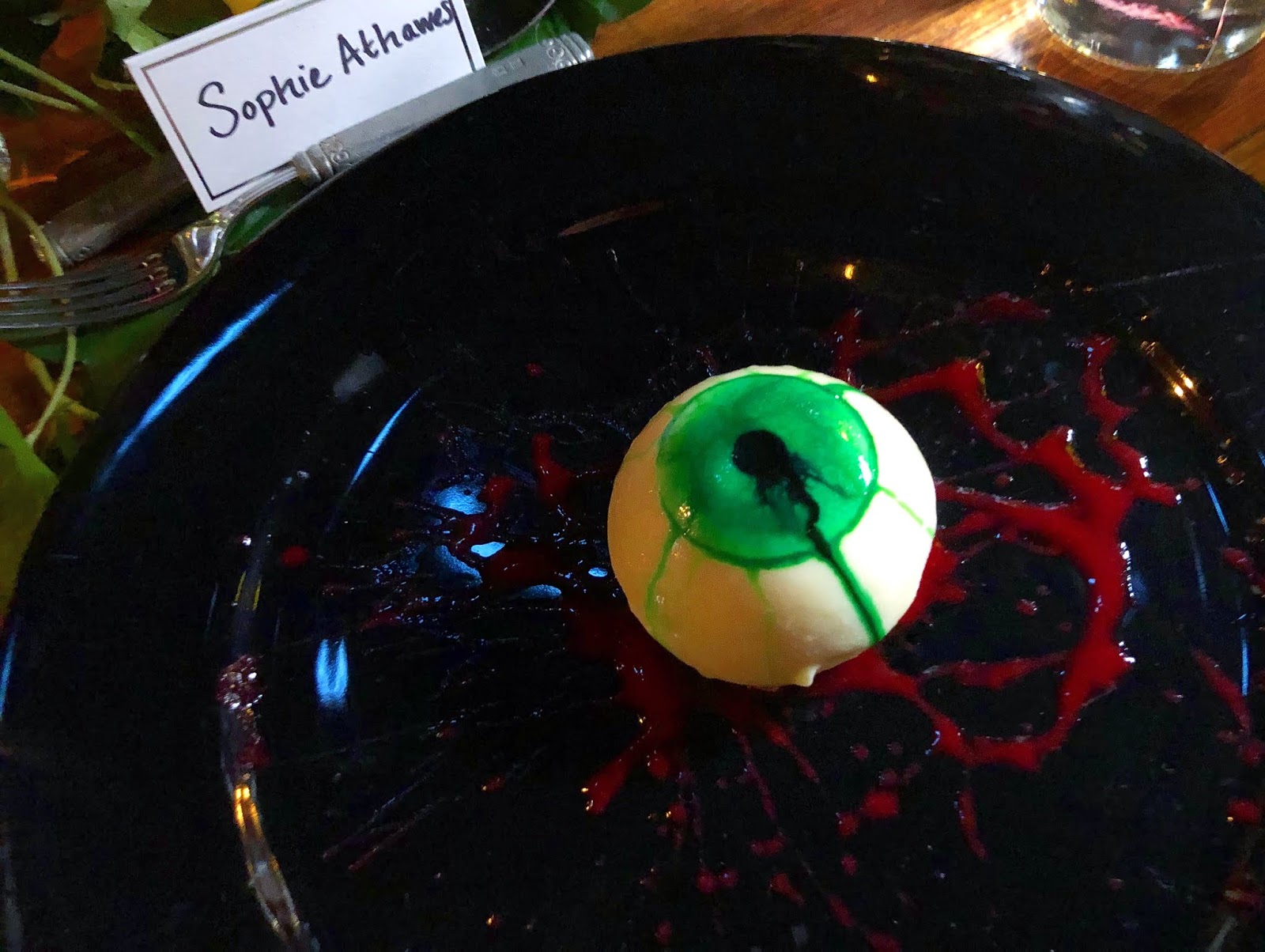 If I had to pick a favourite course, I'd have to say the lamb was incredible and I could have easily eaten another two servings of those. A close second, however, would be the sole and the choux bun which was absolutely perfect despite it's scary appearance. 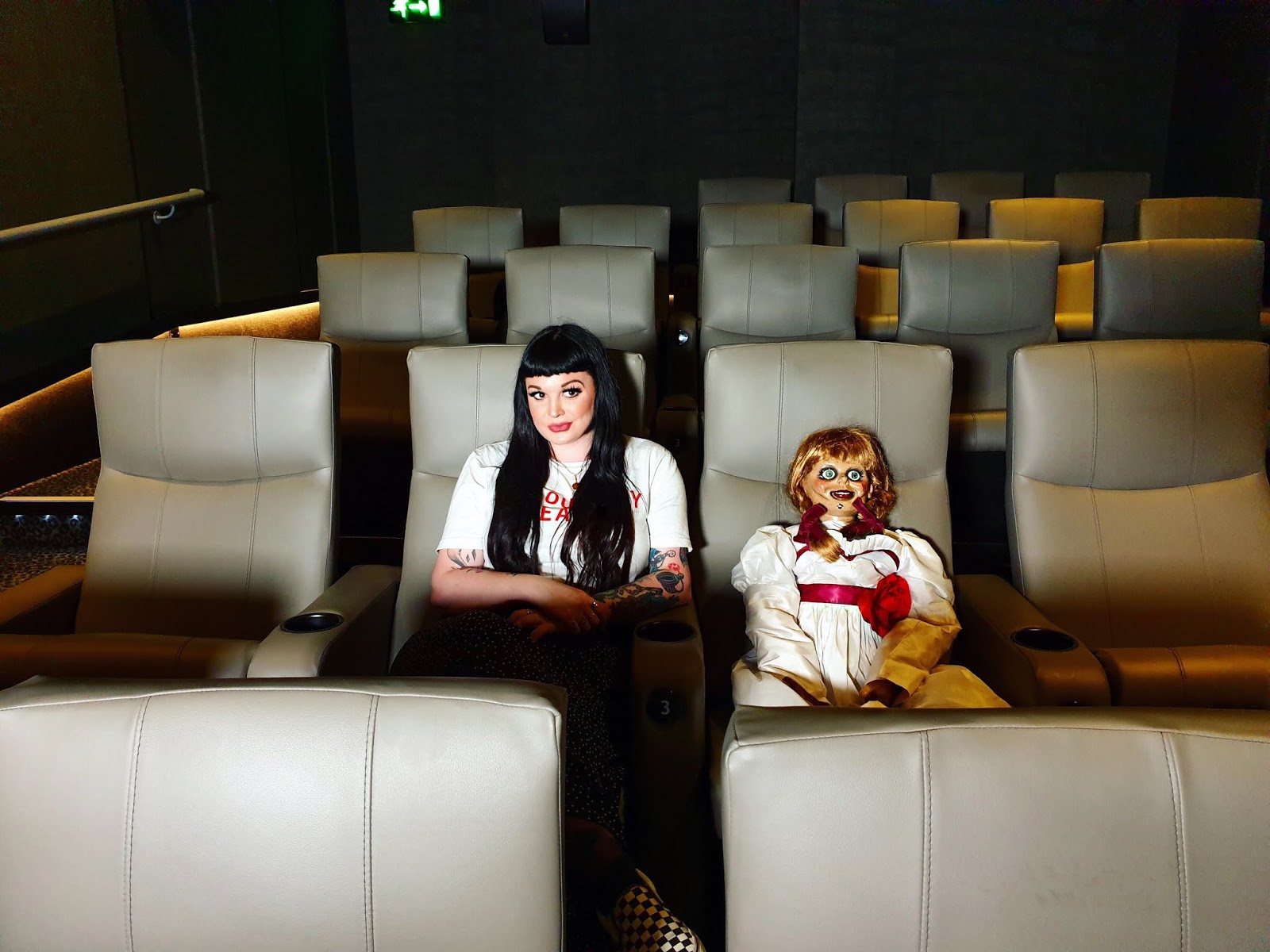 This was easily one of the best film experiences I've ever had. Or just experience, period. Some of you might remember that a little while ago I took part in The Nun experience (also with Warner) and that too was truly incredible and I love how much effort film distributors are going to to market their movies. The food was genuinely delicious and of restaurant quality and I just loved all the little details; from the bumps in the night to the table decor. A huge thanks to Warner Bros for the invite to this, I had a wonderful time and genuinely really enjoyed the film. If you're feeling brave, you can catch Annabelle Comes Home in UK cinemas now. But tell me, which of these would be your course of choice? Would you dare to eat with Annabelle? As always, I love reading your comments so please do leave me lots of lovely ones below.

Disclaimer - I was invited to attend this event by the distributor but was not asked to create any content from it. As always, all opinions are my own and do not reflect the brand