Film Review: 10 Most Anticipated Movies of 2019 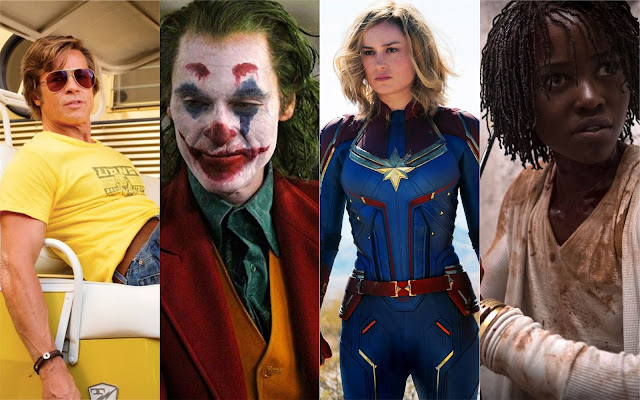 Captain Marvel (Anna Boden, 2019) UK Release: March 8 2019 - In the end credit sequence of Avengers: Infinity War, us Marvel fans were left wondering "where has Captain Marvel been"? The answer, of course, will become clear in this - her origin story. Taking it back to the 90's, Captain Marvel follows Carol Danvers (Oscar winner, Brie Larson) as she becomes one of the Universe’s most powerful heroes. Teaming up with Nick Fury (Samuel L. Jackson), she fights to prevent an interstellar war.

With Brie Larson in the leading role, I have high hopes for this but also so many questions for what this means for the future of the Marvel Cinematic Universe.  You can watch the trailer here.

Vice (Adam McKay, 2018) UK Release: January 25 2019 - Oscar winner Adam McKay returns with another satirical political drama which was inevitably going to have the Academy eating out of his hand. And rightfully so. Vice follows Dick Cheney (Christian Bale) as he rises through the ranks from a lowly intern in Washington; to the White House Chief of Staff, and George W. Bush’s infamous Vice President. With an all-star cast, including Amy Adams, Steve Carell and Sam Rockwell, and 8 Oscar nominations already under it's belt, Vice is set to be one of best films of the year.  You can watch the trailer here.

Fighting with My Family (Stephen Merchant, 2019) UK Release: March 1 2019 - Set in Norwich, Fighting With My Family is the true story of Saraya/Raya (Florence Pugh) and her family of professional wrestlers. However, when Raya is given the opportunity to join the glamorous world of WWE, her relationship with brother Zak (Jack Lowden) faces its toughest challenge. What follows, is the story of Raya as she becomes a WWE superstar and changes the face of wrestling.

I'll be honest, I have already seen this film and I absolutely loved it. Of course, I'll try to share my full review closer to the release but, what I will say, is that it made me laugh, it made me cry and I can't wait to watch it a second time. It's also worth pointing out that you do not need to be a fan of wrestling to enjoy this film; much like you don't need to be a fan of ballet to appreciate Billy Elliot (2000). You can watch the trailer here.

The LEGO Movie 2 (Mike Mitchell, 2019) UK Release: February 8 2019- It's been five long years since our first adventure with Emmet (Chris Pratt) and Lucy (Elizabeth Banks) but it’s finally time for a proper sequel to the 2014 smash hit. The plot centres around the gang as they take on an invasion by aliens from Planet DUPLO. And it's sure to be awesome. You can watch the trailer here.

Avengers: Endgame (Anthony Russo & Joe Russo, 2019) UK Release: April 26 2019 - In Infinity War, we saw Thanos snap his fingers and wipe out half the world's population. Now, we pick up where we left off with the remaining Avengers and heroes. They may have suffered crushing losses and experienced the most tragic defeat imaginable but they’re not finished yet.

Naturally, Marvel are keeping their cards close to their chests on the plot for this one but, with Infinity War proving to be a masterpiece and the Russo's returning to the director's chair(s), the standards have been set high. You can expect a whole lot of mind-blowing action and, no doubt, some devastating events. You can watch the trailer here.

Joker (Todd Phillips, 2019) UK Release: October 4 2019 - Set within the DC Universe, Arthur Fleck (Joaquin Phoenix) is a failed comedian who is driven insane. In giving himself an alter-ego as 'The Joker', he spirals out of control - becoming a psychopathic murderer.

We still have little to go on with Todd Phillips' Joker. However, from the teasers, it is certainly aiming to be reminiscent of Nolan and Heath Ledger's darker portrayal of DC's most infamous villain. Big shoes to fill, if you'll forgive the pun. Unfortunately, if the recent DC Cinematic Universe is anything to go by, Joker could very well fall flat on its face but, with Joaquin Phoenix in the starring role, it is morbid curiosity that earns Joker a top spot on my most anticipated list. You can watch the teaser here.

Us (Jordan Peele, 2019) UK Release: March 22 2019 - Academy Award winner Jordan Peele presents his follow-up to Get Out with yet another original and provocative thriller. The plot is not entirely clear and we can expect a number of twists and turns but, from the trailer, we can see the story follows a mother (Lupita Nyong'o) and father (Winston Duke) as they take their kids on holiday to a beach house. However, their peaceful family time is interrupted when some uninvited visitors arrive. You can watch the trailer here.

Toy Story 4 (Josh Cooley, 2019) UK Release: June 21 2019 - Just when you thought you were over the devastating events of Toy Story 3 (you know the scene I'm talking about), Woody, Buzz and the gang are back for another adventure. Whilst the teaser trailers shared so far have given us very little to go on, there are rumours that the film's plot will see Woody, our old favourites and a reluctant new toy "Forky" as they embark on a road trip. It's Disney, it's Pixar, it's Toy Story. Expect laughs and tears. You can watch the teaser here.

Once Upon Time in Hollywood (Quentin Tarantino, 2019) UK Release Date: July 26 2019 - It's been four years since Tarantino last graced the big screen but he's back with an all-star cast and a film eerily categorised as a 'comedy drama'. Starring Leonardo DiCaprio, Brad Pitt, Margot Robbie (as Sharon Tate), Al Pacino, Tim Roth and many more, the plot follows a failing TV actor and his stunt double in 1969 as they attempt to make a name for themselves during the Charles Manson Helter Skelter reign of terror in Los Angeles.

Unfortunately we have yet to see a trailer or teaser for the film, we have seen a glimpse of the photos from production which show us it is set to be a stylish and bloody affair.

Star Wars: Episode IX (J.J. Abrams, 2019) UK Release Date: December 15 2019 - Yet to be named officially, Star Wars Episode IX is to be the final chapter in the Jedi saga. Written and directed by J.J Abrams, it sees the return of Daisy Ridley and John Boyega alongside a few familiar faces as the Rebellion seek to defeat the evil Resistance and Kylo Ren (Adam Driver).

Naturally, a Star Wars film will always be top of my list and I hope that, given Abrams is back in the directors chair, that fandom won't bring down the tone of it's release. In the case of The Last Jedi (Rian Johnson, 2017) fans took it upon themselves to rip every element of the film limb from limb. Personally, I've really enjoyed all of the latest saga and try not to take it too seriously and so have high hopes for its finale. Further more, given the tragic passing of Carrie Fisher, I am intrigued to see how they recognise her legacy and how the narrative is picked up from The Last Jedi.
___
Well, that's it for my most anticipated films of 2019. Of course, there's many more on my list but, tell me, what films are you looking forward to this year? As usual, I love reading your comments so please do leave me lots of lovely ones below.

Until next time fellow film lovers - here's to another year of film to look forward to!

*Disclaimer - Please note that UK Release dates are subject to change but were accurate at the time this post was published.

Film Review: 10 Most Anticipated Movies of 2019