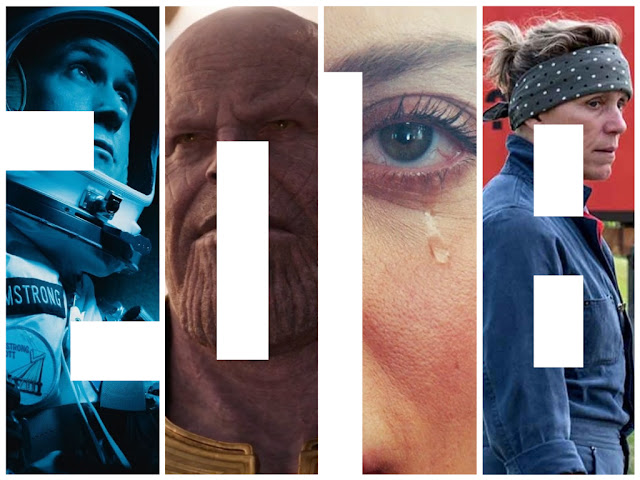 Happy New Year, everyone! With 2018 crammed full of superhero blockbusters and indie masterpieces, it's safe to say that there was a little something for everyone. And so, what better way to start a fresh new year than by looking back? Of all the 110 new releases I managed to see over the past 12 months, here are my official favourite movies of 2018*...

10. Bad Times at the El Royale (Drew Goddard, 2018) - Set in 1960's America, four complete strangers check in to a once famous hotel that sits on the boarders of California and Nevada. However, with each of the guests not who they seem, it quickly becomes a battleground for an almighty reckoning.

Top Things to Do in San Francisco, Ca…
'Kroos messaged me at 4 am': Casemiro…
Changes abound in the paid ads market…
Kicking off my list is possibly the most underrated movie of 2018. It's been seven years since Drew Goddard first blessed us with The Cabin in the Woods but for me, this was very much worth the wait. With an incredible all star cast including Jeff Bridges, Jon Hamm, Dakota Johnson and Chris Hemsworth; Bad Times at the El Royale is beautifully staged film and dripping in neon-lit charisma. Taking inspiration from Tarantino and paying affectionate homage to 60's crime dramas, this is a  much needed and timely commentary - with one heck of a soundtrack. It twists, it turns, it's classy - it's a must-see.

9. You Were Never Really Here (Lynne Ramsay, 2017) - Only six years in the making, Lynn Ramsey has finally graced us with her follow-up to We Need To Talk About Kevin. In this brutal revenge thriller, Joaquin Phoenix stars as Joe, an ex-military hit-man for hire who can't shake his own demons. Having been hired by a mysterious new client, Joe finds himself in the seedy underbelly of child prostitution to rescue a kidnapped 13-year-old girl. To be expected, Ramsay delivers a magnificent melancholy piece with stunning cinematography throughout. Flash back scenes will leave your heart pounding whilst Phoenix serves up a heart-breaking performance as a haunting physical presence at the film’s dark heart.

8. Isle of Dogs (Wes Anderson, 2018) - The second stop-motion animated film from Wes Anderson, Isle of Dogs is set in the futuristic and fictional world of Megasaki City where dogs have been exiled and banished to Trash Island. In search of his beloved dog, 12 year old Atari (Koyu Rankin), crash lands on the island where he is greeted by a pack of dogs (voiced by an all star cast; including Bryan Cranston, Ed Norton, Bill Murray and Jeff Goldblum) who agree to help him find his canine companion. Come for the dogs, stay for the breath-taking stop motion animation and the most visually satisfying sushi-preparation scene you will ever witness.
You can read a related Isle of Dogs post here
7. A Quiet Place (John Krasinski, 2018) - Set in 2020, civilization has collapsed following the arrival of mysterious (seemingly alien) monsters who hunt only by sound. Living entirely in silence, a family (John Krasinski, Emily Blunt, Millicent Simmonds and Noah Jupe) survive on an isolated farm. Whilst A Quiet Place can very much be considered a horror, it’s the subject of family and the raw emotion of Krasinski and (real-life-wife) Emily Blunt’s performances that cerement this as one of the best films of the year. The pair are wholly believable as parents, desperate to give their kids stability. It focuses around a family bond that holds fast. A huge round of applause for Krasinski and Blunt, please.
You can read my full of A Quiet Place review here

6. First Man (Damien Chazelle, 2018) - Damien Chazelle's third masterpiece which follows the true story of Neil Armstrong, a socially awkward engineer who rises through the ranks of NASA’s 1960's space programme to become the first man on the moon. However, the road to history is paved with professional and personal tragedies.

From the city of stars in La La Land, director Damien Chazelle has turned his attention now to the moon. Far from what we've seen before with space-epics such as Apollo 13 (Ron Howard, 1995), this Neil Armstrong biopic is a remarkably different in all the right ways. Much like Whiplash (2014), however, tension plays a leading role, leaving you with a sense of unease throughout. To be expected from Chazelle, the steely aesthetics and beautiful cinematography make this a delight for the eyes. Ryan Gosling, on the other hand, delivers a stellar performance as the grief-stricken Armstrong, while Claire Foy steals scenes with a totally sympathetic turn as his wife, Janet. When the moon landing sequence finally comes – (we all knew he was going to do it) you can finally relax.

5. A Star Is Born (Bradley Cooper, 2018) - Jackson Maine (Bradley Cooper) is a once renowned country star who, upon stumbling in to a bar, meets waitress/singer Ally (Lady Gaga). As the two fall  hopelessly in love, Jackson is determined to make Ally a star her star whilst he quietly sinks deeper in to his emotional demons and addictions.

For a film that has already been made four times (if you include the Janet Gaynor 1937 version), Bradley Cooper’s take still manages to feel relevant and fresh. Having made himself the starring role, director and singer/songwriter in this, you'd think something would have to give - but instead Cooper hits a home run, even giving one of the most heart-breaking performances of the year as Jackson Maine. Combined with this chemistry with Lady Gaga’s Ally, A Star Is Born has all the foundations of a Oscar contender. With a dazzling, propulsive opening hour that gives way to a character drama with considerable character development, Gaga surpasses all expectations and is unforgettable in her first major screen role. And even if he does dub himself as a director to watch, we have to hand it to Cooper on a job well done.

4. Avengers: Infinity War (Joe Russo and Anthony Russo, 2018) - Evil titan, Thanos (Josh Brolin), is on a quest to possess six Infinity Stones which would allow him power over half the universe. In a bid to save mankind, The Avengers must rally together the world's superheroes in an attempt to stop him before it's too late.
It was pretty obvious that this would make it in to my top 5. No, not just because it was the best selling Marvel movie of the year – but because it’s the most Marvel-est Marvel movie Marvel could have Marvelled. And it was awesome. Ten years in the making, Infinity War was a risk and quite the task for any director; to juggle that many characters and plot points was pure madness. And yet somehow, the Russo Brothers have created an incredible superhero film that not only brings the entire MCU together but one that also stands on it's own. The action sequences are close to flawless, whilst the emotion and character development stays true to the previous films we've known and loved this past decade. Frankly, it not only lived up to the mountainous expectations set for it, it surpassed them.

3. Lady Bird (Greta Gerwig, 2017) - Set in the early 2000's, seventeen year-old Christine 'Lady Bird' McPherson (Saoirse Ronan) prepares herself for college, whilst juggling the pressures of family life and high school in Sacramento, California.
Greta Gerwig’s directorial debut was rightfully nominated for several Oscars. Focused very heavily around the relationship of Lady Bird and her mother, Marion (Laurie Metcalf), it is a perfectly-formed love letter to teenage girls and their long-suffering mothers everywhere. Gerwig channels her own life experiences and upbringing in Sacramento into the coming-of-age story that is both a smart and artistic. As always, Saoirse Ronan is flawless in the starring role - as if the role was written for her. She manages somehow to be likeable and charming yet infuriating all at the same time. Meanwhile, Laurie Metcalf earns her Best Supporting Actress nomination as she teases out subtle, tear-jerking emotion as Lady Bird's stern but dedicated mother. Daughters, take your mothers to see this and bring a pack of tissues.

2. The Shape of Water (Guillermo del Toro, 2017) - Elisa (Sally Hawkins) is a mute living an isolated and simple life in 1960s Baltimore. Working as a cleaning lady in a secret government laboratory, her life changes forever when she discovers the lab's classified secret - a mysterious, aquatic creature. As Elisa's relationship with the creature develops, she hatches a plan to free it from the government facility.
I'll admit that on paper, a human/monster love story is a bizarre sounding premise. However, it soon falls in to place when you learn that it is the brainchild of director, Guillermo del Toro. Famous for his stunning cinematography and fantastical narratives; and with such an incredible cast to back it up (Academy nominees Sally Hawkins, Michael Shannon and Oscar winner Octavia Spencer),

1. Three Billboards Outside Ebbing, Missouri (Martin McDonagh, 2017) - Following the tragic death of her teenage daughter, Mildred Hayes (Frances McDormand) rents three large billboard signs with a controversial message directed at William Willoughby (Woody Harrelson); the town's Sheriff. However, not all of the locals are behind her decision - least of all Officer Dixon (Sam Rockwell), who is quick to wage war.

Martin McDonagh’s fiery third feature is comprised of many elements that make it so special but  one shining brightest is the performance of Frances McDormand. In the wake of her daughter’s brutal death, Dormand's Mildred is simply perfect in balancing heart-ache, the morally complex and general bad-assery. Adding even more to the delivery of McDonagh's incredible screenplay are several other unforgettable performances; from Woody Harrelson’s sympathetic but defeated Police Chief, to Sam Rockwell’s racist moron cop. Three Billboards is searing, heart-breaking, hilarious (when it wants to be) and easily my top film of 2018.
__
Well there you have it, folks. I hope you can all appreciate that this Top 10 list was no easy task as there were so many great films this year. Honorable mentions, of course, go out to Spider-Man: Into the Spider-Verse (easily the best Spider-Man movie made to date), Netflix movie Roma (Alfonso Cuarón), Phantom Thread (Paul Thomas Anderson) and Widows  (Steve McQueen).

But tell me, what were your favourite films of 2018 and why? As always, I love reading your comments so please do leave me lots of lovely ones below.

*Please note this list only includes films released in UK cinemas between January 1st - December 31st 2018. It does not include Netflix or streaming releases.


This post first appeared on POPCORN AND GLITTER, please read the originial post: here
People also like
Top Things to Do in San Francisco, California
'Kroos messaged me at 4 am': Casemiro reveals he decided to leave Madrid after Champions League final
Changes abound in the paid ads market — what does it mean for publishers?