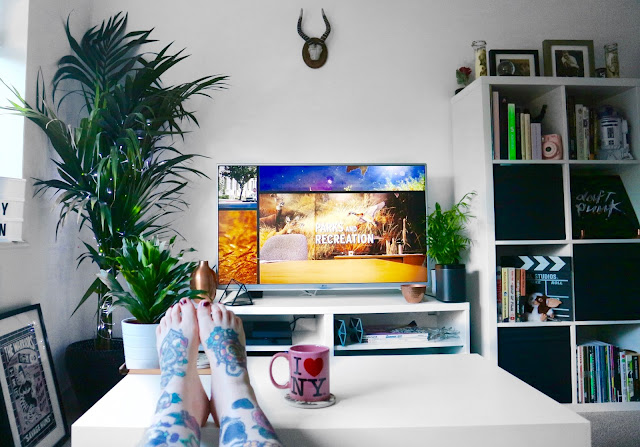 As someone who spends their life watching films in their spare time and at work, it can be hard to switch off. Whilst I Love me a good ole' crime documentary and a zombie-sentric drama series, I can always count on some go-to comedy boxsets to help me unwind and relax. Here's six TV shows I can't live without.

What's it about? Six students at Greendale Community College form a study group and an unlikely friendship from which they have bizarre adventures.
Stars: Alison Brie, Donald Glover, Chevy Chase, Joel McHale, Danny Pudi, Gillian Jacobs, Yvette Nicole Brown, Ken Jeong and Jim Rash.
Why do I love it? I must have watched Community over a dozen times. It's really one of those that I can watch over and over and never get bored. I truly believe it to be my most loved TV series* of all time. If you're a big film fan especially, you'll absolutely love it's nerdy, dry sense of humour and endless popular culture references. Some of their adventures are told via mockumentary, stop-motion, puppets and feature many-a-celebrity cameo. Donald Glover and Danny Pudi in particular, as Troy and Abed, are incredible comedic actors.
Tips for first time viewers: The show ran for six seasons although perhaps it's best to stick to the first five. Some viewers can't get in to it after the first episode as the pilot doesn't quite have the same feel as the rest of the series. But it's worth sticking with it - the more you get to know the characters and the private jokes, the funnier it becomes.

What's it about? When his father is sent to prison for under suspected fraud, Michael Bluth (Jason Bateman) is forced to take over the family real estate business; juggling the needs of his spoiled and eccentric family.
Stars: Jason Bateman, Will Arnett, David Cross, Jessica Walter, Ron Howard, Tony Hale, Portia de Rossi, Michael Cera and Jeffrey Tambor.
Why do I love it? Much like Community, Arrested Development is crammed full of ridiculous and utterly silly jokes which run throughout each season. I must have re-watched every episode dozens of times but I'm still finding little details and Easter eggs each time. As well as having an awesome cast of comedians, it's made all the better by the amazing narration skills of Oscar winning director, Ron Howard.
Tips for first time viewers: The more you watch and get to know the characters and their strange quirks, the better it gets. I wasn't such a huge fan of Season 4 (this was when the show was taken over by Netflix) but the remix edition more than makes up for it.

What's it about? Also shot as a form of mockumentary, Parks and Rec follows Leslie Knope (Amy Poehler) and her team of government staff in the small town of Pawney, Indiana.
Stars: Amy Poehler, Nick Offerman, Chris Pratt, Aubrey Plaza, Adam Scott, Aziz Ansari, Retta and Rob Lowe
Why do I love it? Besides a stellar comedy cast and endless cameos throughout the seasons and some truly hilarious scenes, Parks and Rec is bursting full of heart. Whilst it is most certainly a comedy, it is also a show about team work and friendship. What makes it all the more enjoyable is that a lot of dialogue is actually improvised - particularly in Chris Pratt's role.
Tips for first time viewers: Just watch all of it and then try to tell me Ron Swanson isn't your hero.

What's it about? A gang of five highly unlikeable people run a pub in their local neighbourhood of Philadelphia.
Stars: Charlie Day, Kaitlin Olson, Glenn Howerton, Rob McElhenney and Danny DeVito.
Why do I love it? Besides just being fantastic writing, It's Always Sunny is probably one of the most quotable TV shows ever made. It stars it's creators and what started as 3 guys creating a show on a budget of just $100 is now one of the longest running comedy sitcoms of all time.
Tips for first time viewers: A lot of people go in to It's Always Sunny with a certain expectation. Don't do that. You're not meant to like the characters (although you will end up loving them) and it's incredibly un-PC so if you're easily offended, this probably isn't for you. Start one the second season and then go back to Season 1 when you've finished the show.

What's it about? This show needs no introduction. But if you've been living under a rock for the past 25 years, it follows the Simpsons family; an average family in their animated misadventures in the town of Springfield.
Stars: Voices by Hank Azaria, Harry Shearer, Dan Castellaneta, Nancy Cartwright, Yeardley Smith,  Julie Kavner and many more.
Why do I love it? What's not to love? I've been a die hard Simpsons fan for as long as I can remember. In fact, it's a played a big part in my relationship. I could watch it endlessly and am still finding old episodes just as funny today as I did years ago. Easily the greatest animated show of all time. Everything I needed to know in life, I learned from this show.
Tips for first time viewers: Just watch all of it, what have you been doing? I will say, however, that I avoid new seasons and episodes as they're just not the same.

What's it about? An American reboot of the UK comedy by Ricky Gervais and Stephen Merchant, The Office US follows a paper company in the small town of Scranton, PA.
Stars: Steve Carell, John Krasinski, Jenna Fischer, Rainn Wilson, Mindy Kaling, B J Novak, Ellie Kemper and more.
Why do I love it? Unpopular opinion but I actually prefer the US version to the UK. But it does contain all of the UK's best qualities; the heart, some iconic scenes and a consistently good storyline throughout.  Jim and Pam gave me unrealistic expectations of love but it's still my favourite.
Tips for first time viewers: Nothing necessary - this show is great from start to finish.
___
Well, that's it for my top six TV shows. What are some of your favourites that you just can't live without? Have you seen any of my favourites? As always, I love reading your comments so please do leave me lots of lovely ones below.
Until next time,

*Disclaimer: This post is a collaboration with HMV. As always, all thoughts and opinions are my own and do not reflect that of the brand.