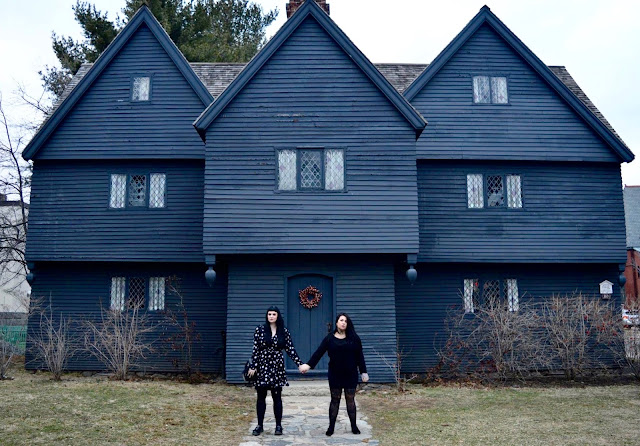 During my recent trip to New York, I decided to make a detour and see somewhere I'd always wanted to visit - Salem, Massachusetts. Accompanied by my beautiful American friend, Rose, and her husband, Derek, we made the 4 and a half drive across the country. Here's a look...

Drug Repurposing II
Follow-Up to “Don’t Be Stupid”
5 ways to support a sick spouse
Things to do in Kuwait, Hollywood of …
Weight Loss Pills,Overview… 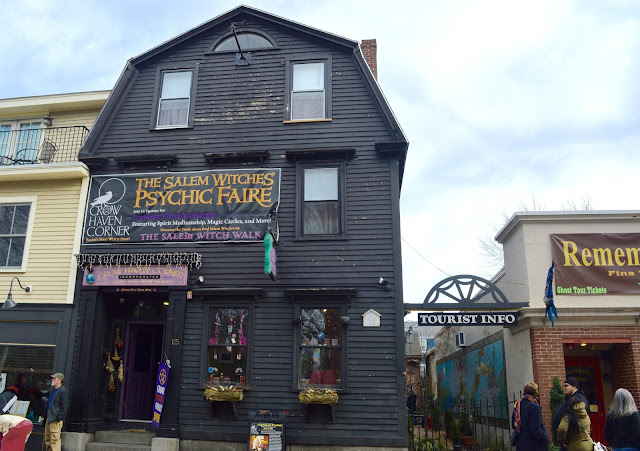 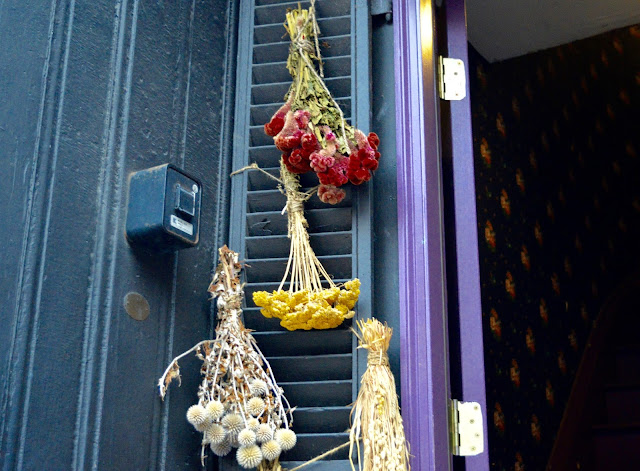 Visiting Salem had always been high on my list of travels. Whilst I don't believe in actual magic or witches, I've always been fascinated by it and have always been a self-proclaimed history buff. Of course, Salem is a place steeped in American history and a hotspot for dark tourism as a result of the Salem Witch trials. Stopping off at a 7/11 to stock up on snacks for the journey, we made the drive through New York, Connecticut to Boston. 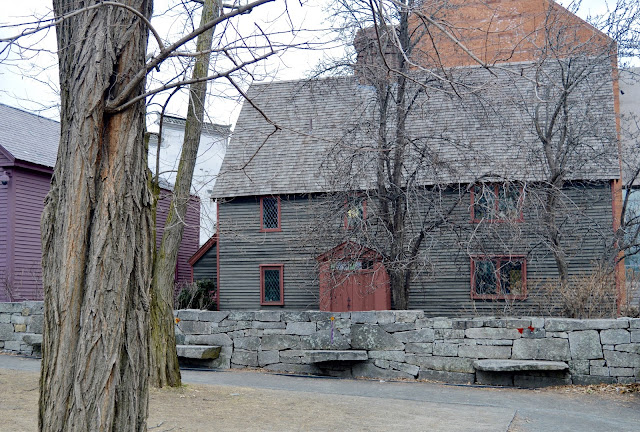 Since we were only there for the day, we made it our mission to cram in as much as possible; starting with Trip Advisor's most recommended walking witch tour. Hosted by local celebrity, Tom, we were taken on an hour and a half long tour of Salem; stopping at some infamous spots from the Witch Trials including the cemetery and some spots seen in such films as Hocus Pocus. 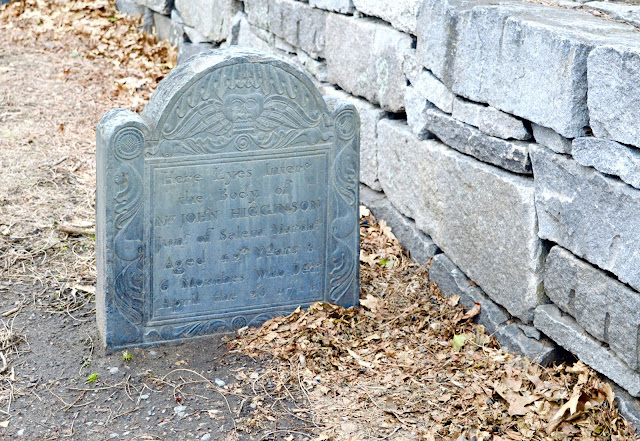 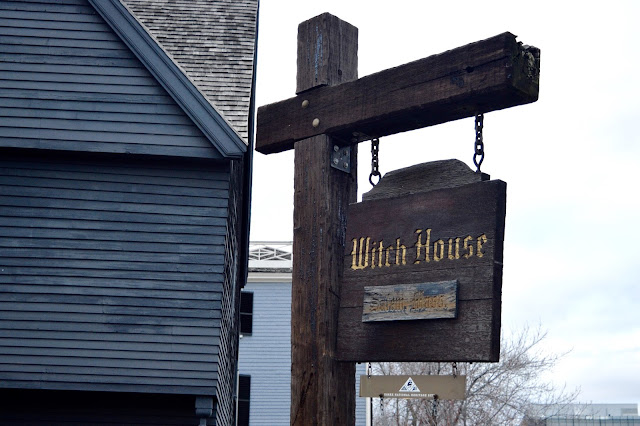 The tour was super fun (especially as a British person) although I would say this particular tour focusses more so on witchcraft and spares you from the gory details of the murders themselves. If you're looking for more historical walks or ones which have a little added scare, there we plenty available. What I did find super interesting, however, that it seemed that the overall message behind the tour was that the Witch trials were very political. It seems that the women who were killed were often outspoken, promiscuous or in a position power such as owners of valuable land - something which went against Puritan ideals. As such, men could accuse these women as a way of keeping order.
We were really lucky that our group was very small and the place was very quiet. One thing to note also is that during Autumn, the streets become packed with tourists, especially at night. Some of the museums and shops are seasonal and so worth checking before visiting. 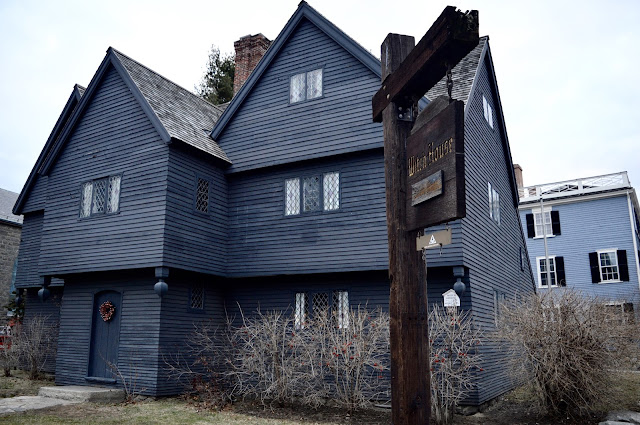 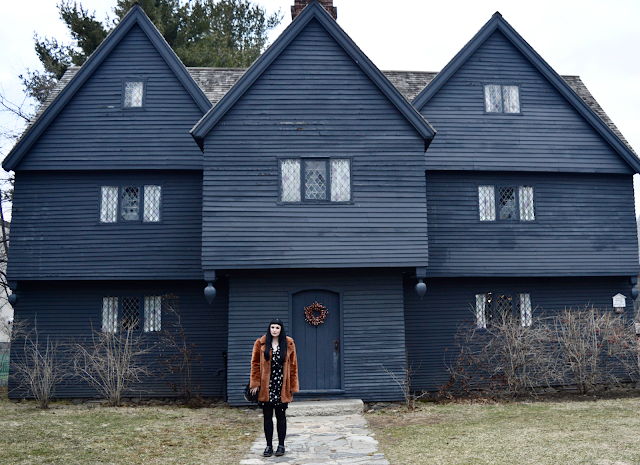 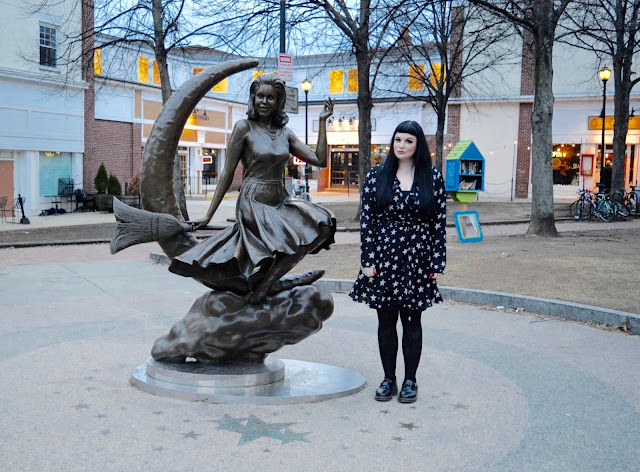 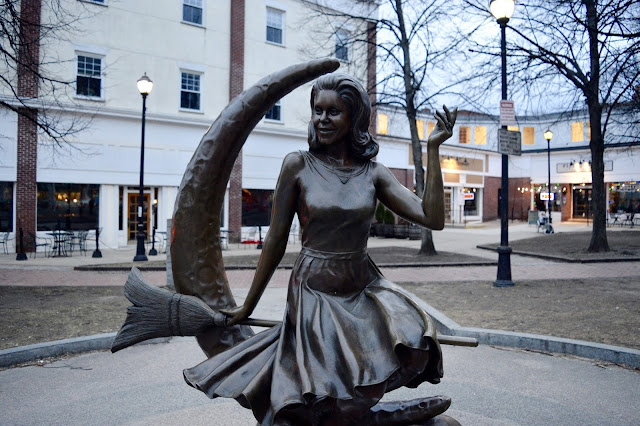 With it soon getting dark, the three of us went in search of some famous Salem landmarks. One of the most popular tourist attractions is The Witch House. Once home to Judge Jonathan Corwin House, The Witch House is the only structure still standing in Salem with direct ties to the Salem Witch Trials of 1692. Fun fact: It's not entirely sure just how old the building is but it is believed to be one of the oldest buildings in America. Plus, look how awesome it is. With Halloween season, it also becomes a museum of 17th century living.

We also stopped off at the Betwitched Samantha statue. It may seem a little insensitive to have a statue of a television witch in a town where women believed to be witches were murdered. However, this is actually a salute to the 1970's sitcom itself. Following the LA studios where Betwitched was filmed, it relocated to Salem and restored a tourism-friendly side to Salem which had long since died out. As such, Bewitched is celebrated in the town for allowing them to embrace their past. Cool, right? You can read more about it here. 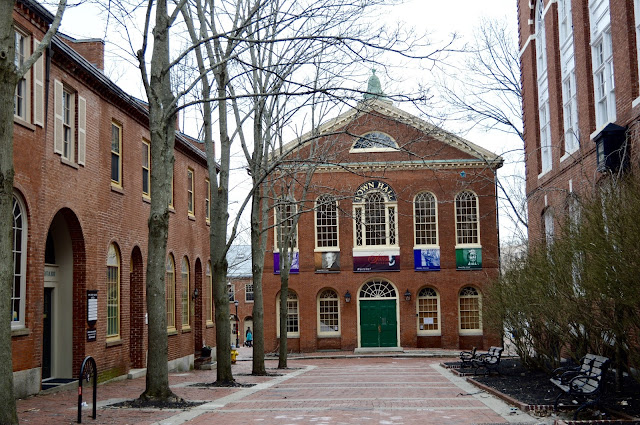 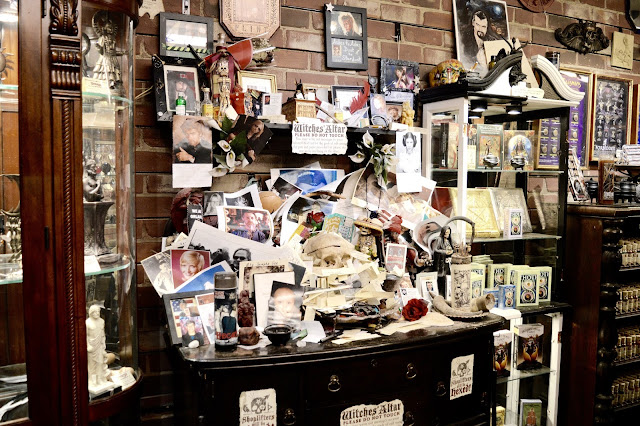 Once it had gotten dark, it was time to get in a few last minute shops. Rose was particularly keen to check out Witch City Wicks, a family-run store known for their vegan candles and taxidermy frames. It's save to say that much dollar was spent here as their pieces were amazing. Pictured above also, you can see the Salem Town Hall (which you may recognise from Hocus Pocus) and another witch store which had a Witches Altar (definition: a raised altar or structure used for prayer or worship. Often used for remembering the dead.) 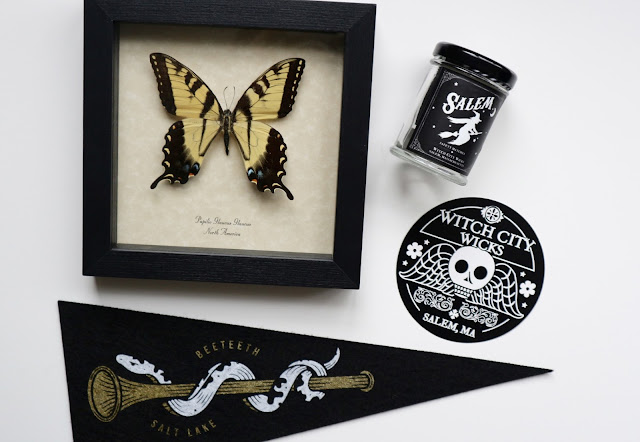 Finally, you can see some of the souvenirs I took home from Salem. If you'd like to see more of the bits and pieces I picked up from my American travels, you can see my post here. With it officially dark outside, we decided to grab some dinner and head home. I had an amazing day exploring Salem with Rose and Derek and I'd love to go back; although perhaps more so around Autumn time (even though it's not recommended due to crowds).

Huge thanks to my American pals for an awesome road trip and Salem adventure - and to Derek for taking some of these snaps for me. That's it for another travel diary - have you ever visited Salem before? Are there places you've always dreamt of visiting? As always, I love reading your comments so please do leave me lots of lovely ones down below.

Until next time fellow witches,