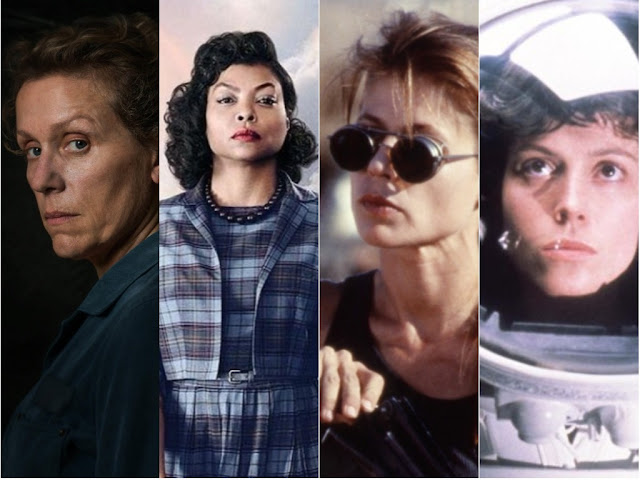 With the Time's Up and #MeToo movement going from strength to strength, it feels as though change is finally in the air. However, the annual report on gender representation in film showed that just 24% were led by women, down from 29% in 2016. More work is still to be done. And so, in the spirit of International Women's Day, I thought I'd put together a list celebrating just a few of my favourite leading ladies (in no particular order).

Mildred Hayes (Three Billboards Outside Ebbing, Missouri, Martin McDonaugh, 2017) - As well as being a truly incredible film all round, Three Billboards owes a great deal of it's success to it's leading lady, Mildred Hayes (Frances McDormand). Having suffered a trumendous tragedy, Mildred takes a stand against the Police Department of Ebbing, Missouri (as well as many of the town's people) in a fight for justice. And sure, she's foul mouthed and sometimes violent but she sticks up for what she believes in.
Some of you may have watched Frances McDormand take home the Oscar for Best Actress for her performance as Mildred Hayes. In taking the stage, she asked all the other Female nominees to take a stand with her and asked the Academy for more opportunities for women in film. A truly inspiring woman both on screen and off.

Ellen Ripley (Alien, Ridley Scott, 1979) - There's no escaping the bad-ass that is Ellen Ripley (Sigourney Weaver) in the Alien series. Released in 1979, a strong female lead was somewhat of a rare occurrence. Thankfully, Ridley Scott is a director who continues to champion strong female characters in his films. Whilst Ripley is arguably sexualised in some brief scenes, she is ultimately an empowering feminist figure - and nothing gets more feminist theory than a women being chased by a giant phallic space monster. Besides its social and political context, Alien remains a unique and beautifully directed narrative and is well worth the watch if you haven't seen it already.

Sarah Connor (Terminator Franchise, 1984, James Cameron) - A seemingly indestructible humanoid cyborg (Arnold Schwarzenegger) is sent from 2029 to 1984 to assassinate a waitress, whose unborn son will lead humanity in a war against the machines. One serious badass not to be messed with is Sarah Connor (Linda Hamilton). Targeted by an assassin from the future known as The Terminator (and in the second film, an indestructible melty mental man), Sarah transforms from a a shy waitress to a Mama Grizzly who will stop at nothing to save the world from Judgement Day.

Clarice Starling (Silence of the Lambs, Jonathan Demme, 1991) - If you haven't yet taken the time to see Silence of the Lambs, you are seriously missing out on a truly amazing and gritty crime thriller.  Made all the more brilliant by FBI agent, Clarice Starling (Jodie Foster). Determined, ambitious though sometimes vulnerable, Clarice goes from strength to strength in her career to solve a series of horrific murders. Better yet, she forms a bond with Dr. Lecter and succeeds where others failed.

Katherine Johnson (Hidden Figures, Theodore Melfi, 2016) - If Hidden Figures doesn't see you crack a tear or two then there's a good chance you're part monster.  All three leading ladies give stellar performances in this, in particular Taraji P. Henson as Katherine Johnson; an African-American mathematician who's work was pivotal to NASA's aeronautics and space programs. Despite prejudice and racism, she stood her ground and emerged to be one of the most inspirational women in history.

Elle Woods (Legally Blonde, Robert Luketic, 2001) - You may be thinking that Legally Blonde is an odd choice to include on my list. However, it is way worth re-watching to see all the incredible (not to mention just as relevant) feminist nods. When Elle (Reese Witherspoon) gets dumped by her high school boyfriend, she takes a bad situation and uses it as fuel to discover her true potential. She successfully applies for Harvard to become a lawyer and she does it all while looking flawless, staying true to herself and always with a positive attitude. What better way to get back at your ex then being the most happy and successful version of yourself you can be?
__
Well that's just a few leading women I find inspiring. Who are some of your most favourite empowering female characters? As always, I love reading your comments so please do leave me lots of lovely ones below.
"I feel like every year there's a thing about 'not enough roles for ladies!' and, then, also an article, like 'The Year of The Woman.' I think that we all just know in our hearts they're underrepresented. But that doesn't mean that there aren't amazing moments" - Greta Gerwig
Until then,