Hurray, we are not in France and all of the shops are OPEN!  Had some cereal and fruit and loads of tea and coffee and SIL looked rather tired and WF said he had done enough shopping the other day so OH and I went into BSE and looked at Debenhams and some men's outfitters and had lovely pumpkin soup and read the papers and watched people and listened to their conversations.

Didnt manage to find anything we really wanted - I am still keen on finding a Dremel drill with some fine bits, in order to drill out resin pieces.  Also need to find some two part epoxy mould making silicone.

OH said he knew of a craft shop, which got me really excited, but it was shut.  Drove around the lovely villages, including Lavenham, which is full of gorgeous thatched cottages with wooden columbages and painted in shades of red, rose, yellow and blue.  So beautiful and so English. 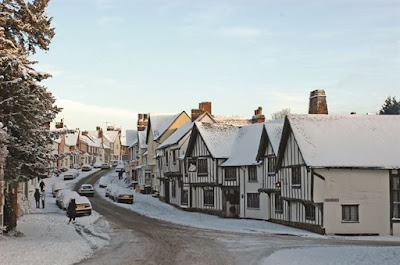 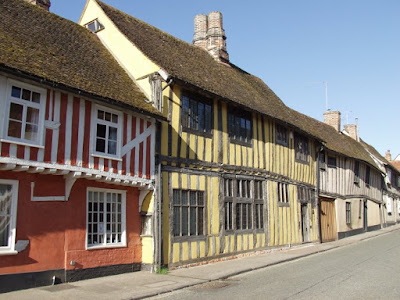 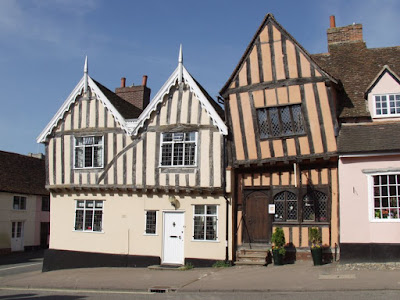 http://www.beenthere-donethat.org.uk/lavenham2.html
Got back rather late and found that GJ and JJ had gone and OH's brother and family had arrived - CL, wife DL, daughter HL and son TL.  We had grabbed the comfy bed and left them the sofas and the double Sofa Bed but OH had not changed the sheets on the sofa bed before leaving this morning and apparently DL had kicked off about this.  SIL cornered OH and I could hear hissed words.  I kept well out of it.  DL is always kicking off about things.  I thought she had had her hair coloured, which would have been a real surprise as she is the meanest woman on the Planet when it comes to spending cash.  No, she has gone a yellowy kind of grey and, despite being nearly 60, still has the same mid shoulder length hair with chewed off fringe; the speciality of the now ageing mobile hairdresser who comes to her house twice a year.  They are busy installing themselves.  BIL is looking stressed at the amount of clobber they have spread everywhere and WF seems to have gone for a sleep.
I make a better effort on the starter and produce Goats Cheese with caramelised onions, creamy salad dressing on rocket and spinach and Bayonne Ham and cherry tomatoes with ricotta.  Everyone but DL eats and enjoys it.  DL gives most of it to WF as she 'cant' eat ricotta or goats cheese or Bayonne ham.  She has no problem eating cake, I notice.
The last time I saw her, she took me 'shopping' in Meadow Hall in Sheffield.  I wanted a hat for MIL's funeral and found some wonderful ones and DL wouldn't let me buy them and kept on dragging me into more shops until we rang out of time.  She wouldn't go for a coffee or lunch but sat on a bench with a discount sandwich and a small bottle of water.  I left her to it and had at least two cups of coffee and a delicious bacon, lettuce and tomato on cereal. She is totally exhausting and can only talk about shopping and telly.  OH brother doesn't seem to like her either.  It is beyond me how they had three children together.  I ended up hiring a hat.  A massive, sparkly, black hat.  I feel funerals are for celebrating a life, not being miserable.  I suspect it did badly block the view of the people sitting behind me though...
She is a denizen of the charity shops, where she doesn't hesitate to use her negotiating skills.  Everything then amasses in their home and garage, which after 24 years of occupation, are bulging in a Cyril Fletcher suit fashion.  The garage is the home of items which are designated 'garage sale'.  The paraphernalia of the growing up of three children who fell in and out of love with bikes, skateboards, scooters, dolls, computers, printers, pool table, table tennis tables, car bits and broken furniture.  Nothing leaves.  It is the Sheffield version of Hotel California.  Amusingly, the electric doors malfunction and periodically, they open and close on their own, giving the neighbours a view of the installation inside.  I really must dig out and retell the story of one of the boy's birthday parties; now part of the family history and pulled out and re examined in exquisite detail by all who were there.  Still hilarious after 14 years.
Watched the start of a three part version of Ten Little Niggers by Agatha Christie, a title which has morphed, through the application of Political Correctness, via Ten Little Indians and arrived today at And Then There Were None.


This post first appeared on LEAVING NORMAL, please read the originial post: here
People also like
Latest February transfer talk. | Mason Greenwood, Ayew, Pogba, Keylor Navas, Arsenal
Outdoor Sofa vs. Outdoor Sectional – What Is The Difference
Experience Unforgettable Pleasure: Discover the Sex-Positive Resorts of Summer!
Why SEO Is The Next Big Thing in the Real Estate Industry
Home Workouts for Weight Loss
What You Need to Know About Sydney Epoxy Flooring
Selling Handmade Products on Etsy
Why you should journal regularly