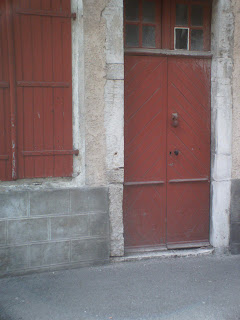 News travels fast in a small town. Sometimes it travels so fast that it seems, as the old saying goes, that you could die and be in heaven before the Devil even knows you're dead. In this small town that's almost always exactly the case.
I was having a coffee at Screemie-Meemie's house (our family calls her that, because all she ever does all day long is scream at her kids), when the the streetsweeper passed by the open window. That was André, the man hired by the Town to walk along the alleys and lanes in town with his little wagon and broom, sweeping up any dead birds, cigarette butts, general litter, and dogpoop. The French haven't quite gotten the idea of rubbish cans and throwing things anywhere but on the street, yet. I suppose that this comes from having had a few generations of 'guest workers' from Algeria to do their dirty work for them.

The job of a village streetsweeper isn't such a difficult one, all that really has to be done is to go around the town and make sure that all the alleys, lanes, and little cobblestoned roads look nice and tidy. Just the streets, nothing else. The light blue flowerboxes all over town, ever filled to overflowing perfection with a rainbow of chorographed blooms, are taken care of by another department...this one a team of gardeners whose only job is to set out the plants, come by with the watertruck or the wateringcans in those allyways where the truck can't fit, and to replace any stolen, dead, or finished-blooming plants with even more perfect ones.

This is what comes of being a town that's in the annual French national competition for the prettiest and most flowerful village of them all. It draws the tourists, but it can sometimes feel as if we residents live on a set in Disneyland. During the winter, when life is hard and poor because no tourists come, life gets back to some semblance of normality, and looks a bit more like a lived-in house, dirty dishes and piled up laundry, and all.

In the winter, the streets are not quite as pretty, not quite as clean, although you can be sure and certain that once winter breaks, the town sends out an army of employees and the spring cleaning campaign begins. Then, there is even an auxilliary streetsweeper brought in, as well as heavy equipment in the form of hoses to wash down the streets, sprayguns filled with nice-smelling disinfectant to wash down the urine-scented walls of the hidden nooks and crannies in the patchwork collection of centuries old added-on to buildings, and a small group of painters armed with brushes and buckets of the light blue paint that's been chosen as the official colour of the town.

Being the townstreetsweeper has it's benefits, if you like gossip. And André certainly does. If you want to know who is being seen with whom, who hasn't washed their windowpanes or is still dressed in pyjamas after lunchtime, how many bottles of wine Madame DuPont has recently had delivered, or even what the Mayor and his council officers had for lunch at the last Town Hall meeting...then Andre's the man to ask. He visibly throws back his shoulders and puffs up with pride, he is so proud to be asked and able to recount all that's been going on in this small, village-within-a-village that is the center of town.

If nobody is around or bothers to ask, then Andre will stop you and let you know all about current events. Which includes stopping by open windows in order to make his announcements. This is how I found out all about how Angelique's father had died, when I was sitting having a coffee with a quiet Sceemie-Meemie. She was quiet because the older kids were at school and the baby was upstairs in his bed, sound asleep.

Poor old Mr. Duclos had dropped dead not an hour before, at a church meeting where he was an elderly, but active, member. He'd heart had simply stopped beating, and he'd toppled over from the chair he was sitting on, to the floor just after remarking how everything was going so well at the meeting and how lovely it was to have the get-togethers and see everyone. I suppose you could say he had a good end.

The ambulance was called and when they arrived, they announced to all present that the old man was dead and took him away to wherever it is that a person gets taken to between the end of their life and the funeral. Of course, this being the kind of town that it is, or maybe human nature being the kind of thing it is, anyone that happened to be passing while the ambulance was parked outside the church and while Mr. Duclos was being loaded up into the back of the now transformed hearse was now free to spread the news. Including André, who wasn't actually near the church when all the excitemant began, but had been sweeping the lane over by the butchershop, heard the siren blare from the top of the Town Hall and had followed the sounds of the ambulance, scurrying over to the church, dragging his rubbishbin cart behind him, as he figured out where the emergency services were parked.

Soon, André had added the title of Town Crier to his job discription, and had come by the window and filled us in on all the detail. As I walked back to my own house a few minutes later, reflecting on the issues if life and death, I met up with a friend and we walked together the rest of the way, stopping by my front door to finish our conversation. Naturally, the topic of conversation was Mr. Duclos' death. He had been a widower with two children, one of them a spinster daughter who had spent her life taking care of both of her parents until the day they'd died, and today was one of those days.

The daughter, Angelique, took that moment to walk past. As is the habit in France, she stopped to give the usual two-peck kiss, one on each cheek...or rather, in the air in the general vicinity of each cheek. Custom has it that you murmur 'comment ça va?' or 'bonjour', or some such thing as the kisses are being done, so I thought it only polite good form to say to Angelique, 'oh, Angelique, I'm so sorry to hear that your father has died'.

Well, that was a mistake. Anglique gave out a big scream, yelled 'Salope!' at me, and ran off in her high heels towards the direction of the church. Salope is the French word for Bitch. My friend and I just looked at each other. She said, 'what the hell was that?', and it slowly dawned on me that parhaps Angelique hadn't yet heard the news about her father. If I hadn't have been so concerned with polite and correct greetings, then I might've realized that she was on her way to the church as she passed us, going to fetch her father and walk him home from the meeting he'd been to. After all, he'd only been dead for about an hour.

So it seemed that Angelique's dad had had a better ending to his life than Angelique had with it. And to top it off, from that day foreward, the poor woman would be reminded of this, each and everytime she saw my face. I did what I could for damage control. I called a good friend of hers and relayed the news of the death and the events surrounding it. The friend, Juliette, was able to come and stay with Angelique during the period of mourning, right up until a few days after the funeral, which was a blessing, as Angelique didn't really have anyone else, except for one brother that lived somewhere else and that hadn't been so immersed in the aspects of caring for the parents.

Juliette had her work cut out for her, as Angelique could be quite a stubborn and willful woman. As Juliette tells it, the worst part of it was when it came to the laying out of Mr. Duclos' body in the front room of the family home. This pre-funeral custom is fairly common in France, or, at least it it is the older familes, or where older members of a family are still alive. Maybe in the newer, more modern families it's not so often done anymore, and the dearly beloved deceased is sent straight to the cemetery from the undertakers.

Anglelique didn't just want her father laid out in the parlour; she wanted him laid out in his own bed in the parlour. So, that evening, when the body was brought back to the house for the wake, she insisted that the deliverymen not put her father, who was already neatly placed in his coffin, onto the special table provided for the occasion. She insisted that his bed had to be brought down from the ustairs bedroom, frame, mattress, bedclothes and all, and set up, then made up, with the dad changed into his pyjamas and put into bed and positioned as if he were not really dead, but only asleep. Grief has many faces many ways of coping with the fact.

Thinking about it, though, I've come to the conclusion that Angelique was simply doing something that has always been done in this small French town, and perhaps in all of the wold where isolated communities had to deal with death on a personal and real level, as opposed to today's way of quick, sanitary disposal and quick sanitary grief counselors. It wasn't until I got to this place that I saw widow's weeds and old people dressed for the rest of their lives in black.

I recall a very old man once showing me a picture of what I took to be a sleeping child in an iron-grilled bed, surrounded by carefully placed and spaced long-stemmed roses. The picure was an old black and white one, with ragged edges and crease marks. He'd pulled it out from his wallet, where it had probably been since the day it was developed, probably more tha half a century before. The child's eyes looked sunken, and at first I thought it was ill, and didn't realize at first that it was a deathbed photograph that I was looking at. A dead child in a bed, made up to look asleep, with a circle of flowers carefully placed around the child. No wonder Angelique argued with the men who had come to set up her father in the parlour, until he was positioned as she wished. Nothing has changed, only the years have passed.

As the ambulance service in this small town is voluntary, the good men and women who take on this job are not exactly professionals...that is to say that they are trained in the job of trying to save people, but perhaps less so in the diplomatic and tactful parts of the job. All the same, I can't for the life of me comprehend why on earth the ambulance services told the people standing around the body, as they loaded poor old Mr. Duclos onto the ambulance, that he had died. It would have been so much more kind and diplomatic, not to mention professinal, to have said that Mr. Duclos was simply ill. Then, when the next of kin had been informed, things cold have been made public. They could've waited untill the ambulance doors had shut before pulling the sheet over his face, after all.
POSTED