Subject of potential purchase in Windermere took up much of our thoughts.  The agent rang at 11.30 and said that the new offer of 212000 euros had also been refused and could we go up into the 220's.  We Looked at the Lettings schedule for 2016 - currently empty - and compared it with those of other houses in the area.  Many already have a lot of advance bookings.  'Our' House looks drab and the first picture on the lettings website is the dark slate facade.  Other houses have pretty pictures of the interiors.  The one we are considering has the same dimensions as the other houses, is in the same area, but even though it is cheaper, it is not letting because the main rooms look sterile or sad.  One of the bedrooms is crammed out with furniture.  Hopefully Mrs Noddi can go and look at it for us. And Mr Noddi of course.  It does have private parking, which is most unusual.  There is a crap review of the house on the lettings site too, which is not going to help.  This is a link to the property details

This is a prettied up version of Oak Street

OH then passed out on sofa whilst watching Bargain Hunt and said we needed to reinstate siestas at least a couple of times a week.  Poor lamb, he finds it so hard being awake all day, every day...

Took dog out along the railway track and left OH to recommence the battle with the brambles which have taken over the old orchard.  There were no leaves for me to try to catch.  No communication from the Portuguese guy about the chateau.  No new enquiries. Went to buy bread and was admiring the beautiful choux pastry 'pièce montée' when my colleague from a partner agency tapped me on the shoulder.  As usual, she looked very stressed.  She also mentioned that the beautiful villa in town had sold.  Bummer - was convinced that the US guy would go for that.  Would have gone for it myself in another life and time.  My favourite of all my current stock.  US guy has said he wont be able to get over until the New Year.  Just hope chateau near mountains is still for sale as he really loves that one.  Interestingly, property which has been on sale for years is now starting to move.

A pièce montée is literally a tower of choux buns 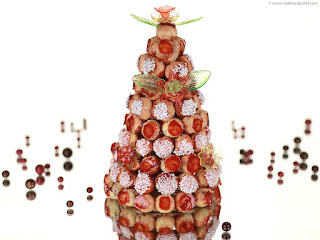 https://www.meilleurduchef.com
Made lemon meringue pie and spag bol and we watched the remainder of Hamlet with Glenn Close and Mel Gibson.  They were excellent.  Helena Bonham Carter was a convincingly mad Ophelia.  Rosencranz and Guildenstern were dead.  I spent quite a lot of the time not having a clue what was going on and had to catch up by reading the plot summary.  At least when you watch Shakespeare at home, you can pause him and get a cup of tea.
OH then went to bed and I found Kirstie's Handmade Christmas, followed by the Most Expensive Christmas where amazingly beautiful things were sold for absurd prices to billionaires.  Every thing was super Sparkly.  A topper for a Christmas tree was made, studded with diamonds and centred was a massive diamond which could be separated and worn on a silver chain.  Price tag?  Half a million pounds....  My glitter balls are more sparkly.
Had to admit to the lady who ordered a whole flower pendant that the whole flower had gone murky sort of yellow and looked like it had spent five years on a pub ceiling, back in the 70's.  She was very understanding and ordered a white hydrangea one which I have in stock.
Have had a number of orders this week!  Lots of seed buttons and also some of my new sparkly hearts.  Am actually in profit on the enterprise.


This post first appeared on LEAVING NORMAL, please read the originial post: here
People also like
How To Keep A Patio Cool – Beat The Heat
Why SEO Is The Next Big Thing in the Real Estate Industry
30 Cheap & High ROI Home Renovations (And 5 Costly DIY Mistakes)
Telegram Marketing solutions
It's Time To Rebuild
Fitness Routines For Busy Professionals
Work From Home Jobs
Epoxy Flooring
React JS, Node JS & Angular JS: Which One is The Best For Web Development?