Interview with a Vampire Collector

Mr 22 has always been crazy about collecting. 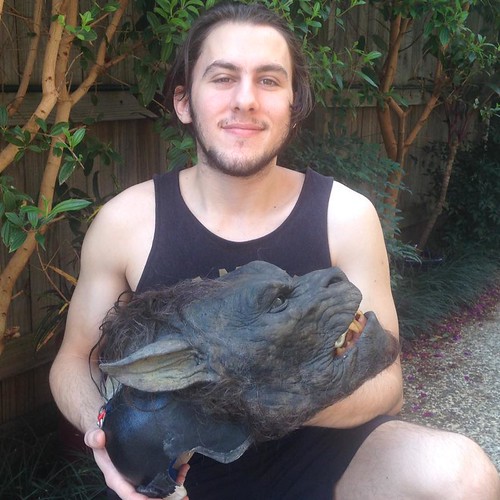 He went through so many phases and crazes as he was growing up – Bey Blades, Crazybones, Pokemon and Yu-gi-oh cards, anything that came in chip packets, Mighty Beans, wrestling figures, the toys from McDonald’s hapy meals, Lego Bionicles, and mondos – to name just a few!

A Furry’s Guide to Cryptocurrency
Paul Oz Takes Oil Painting Into the 2…
“The Friend Who May Not Seem a Friend…
6 Interesting Places To Hold Your Nex…
What Causes Bed Bugs?

He progressed to more grown-up collectables around the time of his 18th birthday. We were mystified when he announced that he would like a mask like the one worn by Michael Myers in the Halloween movies, for his 18th birthday. Certainly not your standard birthday gift to celebrate reaching adulthood!

These days however, I guess you could say he is a vampire collector! Here’s how it came about …

What made you decide to collect masks?

I loved the Halloween movies, and saw these masks online which I thought would make a great souvenir of one of my favourite movies. I particularly loved the fact that they were hand crafted and unique, rather than mass produced. In fact some of the masks I ordered came with a personalised video of the artist creating them and talking me (using my name and everything!) through the process.

How many masks did you end up with? 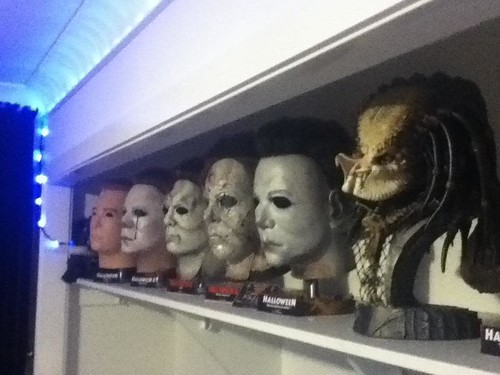 Because the mask changes in each Halloween movie and I wanted some of the different types. Some of the styles are not really to my liking so I didn’t get those ones.

After a while I became interested in quarter scale statues of movie characters, so I sold my masks (MAM: for a profit I might add!) and began collecting them instead. The first one I bought was a Freddy Kreuger (from Nightmare on Elm Street), but I also collected figurines from Terminator, Predator, X Men, Resident Evil, and Pirates of the Caribbean. 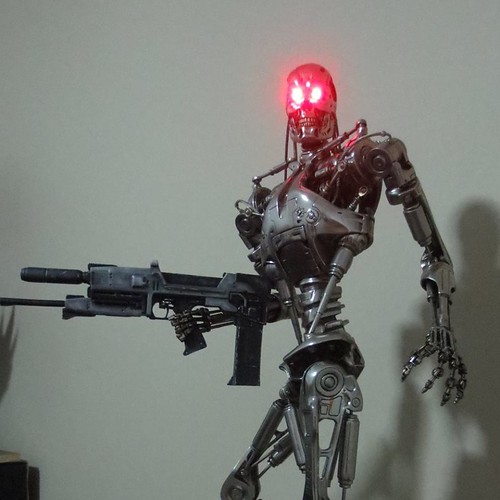 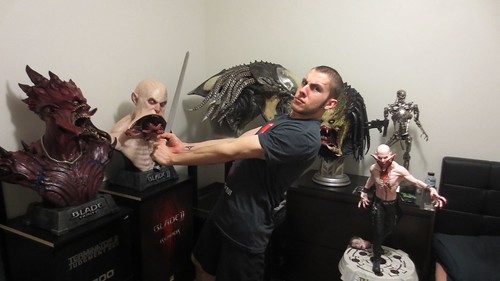 But you didn’t stick with them for long!

As I was earning more, I became interested in more expensive statues, like life size busts, and one third scale statues – “cinemaquettes” is one brand I particularly liked. It was around this time I got into the Underworld movies which are about the ongoing battle between vampires and wherewolves (lycans). 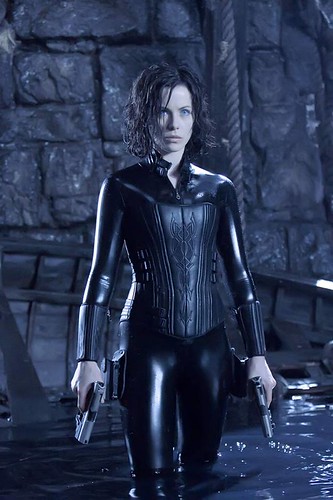 And now you’re into actual screen used props and costumes from your favourite movies!

Yeah I was really surprised when I realised I could actually afford some of them. Underworld at this point doesn’t have a huge cult following, which means memorabilia is cheaper than with some of the blockbusters. Though that might change with a new Underworld movie coming out soon. 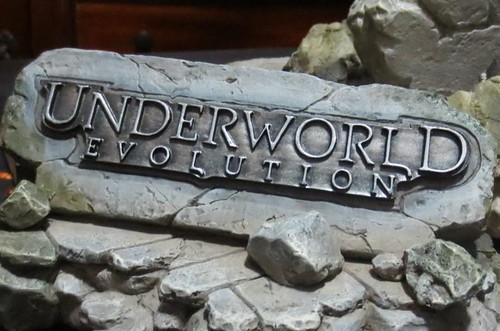 The first screen used prop I bought was a shuriken (throwing star) that Selene (Kate Beckinsale) used in the fourth movie.

I’ve sold most of my cinemaquettes now to buy movie pieces instead.

What movies do you collect, apart from Underworld?

I have a couple of small pieces from Harry Potter; and from Blade; Terminator; and Predator.

What’s your favourite piece in your (mostly) vampire-inspired collection at the moment?

It would have to be the Selene costume (a catsuit actually worn by Kate Beckinsale). Though the Marcus (another vampire from Underworld) kilt is a close second. Oh, and the screen-used lycan head. 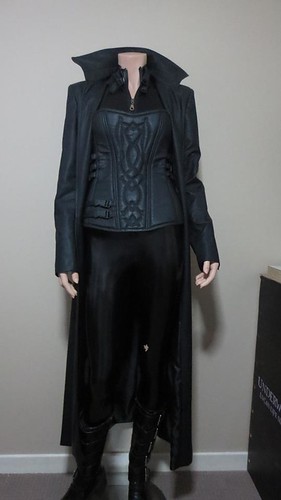 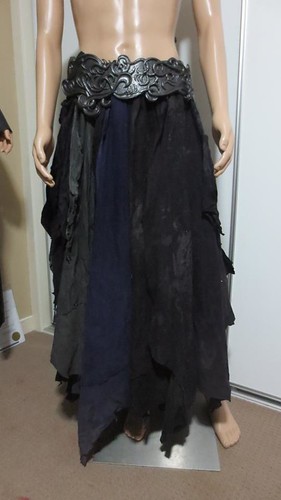 Do you have a dream item you would love to add to your collection?

Brad Pitt’s red leather jacket from Fight Club – but as that’s worth about $100 000, I don’t think it’s gonna happen any time soon!

What’s the best profit you’ve ever made on a collectable?

When I sold the Predator lifesize bust (MAM: complete with weird dreadlocky things!) I made $850 profit. Sometimes I break even; I rarely take a loss.

At the moment you keep all your collectables set up in the spare bedroom, like a miniature gallery or museum, but I know you are keen to move into your own place when you finish uni. How do you plan to display your collectables then?

I would love to have a museum style setup throughout the whole house, with pieces on display in glass cases. For example I’d take the doors off the linen cupboard and put a perspex front on it, add spotlights, and display things there. 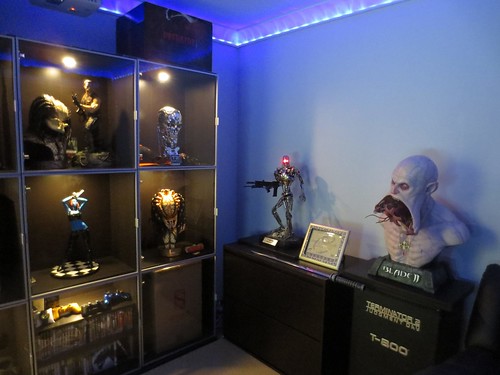 But where will you keep your sheets and towels?

Meh, they can go somewhere else.

Why do you like collecting these pieces so much?

I see it as an investment, as I rarely lose money and often make a profit. It’s like buying gold – bound to go up in value – but I actually have something to show for it. I get the enjoyment of having these collectables, but it’s a good investment too (MAM: this boy is studying Commerce at uni – definitely in the right course!).

I know you got a good deal on a lycan head recently. Tell us about that.

Yeah I got a good deal on this lycan head – that was actually worn by one of the actors in Underworld – from a private collector. Just a few weeks later another one sold at auction for $13 000 so I’m pretty happy about that!

Are there any pieces you wouldn’t part with?

Hey if I get offered the right price I’m happy to sell. Though I don’t want to part with any just now.

So there you have it ladies and gentlemen – an interview with a vampire collector. What’s the most unusual collection you’ve ever come across?!

This post first appeared on Middle Aged Mama - A Blog For Middle Aged Women, please read the originial post: here
People also like
A Furry’s Guide to Cryptocurrency
Paul Oz Takes Oil Painting Into the 21st Century
“The Friend Who May Not Seem a Friend” – The Cat and the Fire, Post 2 of 3
6 Interesting Places To Hold Your Next Corporate Function
What Causes Bed Bugs?
Self Motivation: How to Keep Moving Forward In Your Career or Business
10 Notable Online Video Makers That is Sure to Give Your Business an Edge
Capture Attention and Drive Traffic with Catchy Headlines: 7 Ideas for Blog Titles
Things You Should Stop Worrying About in Bed
Raam Tamil Movie | Aarariraro Video Song | Jiiva | Saranya | Yuvan Shankar Raja | Star Music India

Interview with a Vampire Collector