Please excuse me but my shopping mall stories are far from over!

I really did serious ‘malling’ before Christmas in Cebu. My sister and I were cramming for our Christmas eve family get together gift giving. We managed to buy most of the gifts but we still have a few left on the list. The parents also gave us the task to buy their gifts so that added up to our to-do items. But the whole exercise was fun. It is good therapy to shop for someone, as long as you know what item to buy. It is nothing like reckless idle shopping. 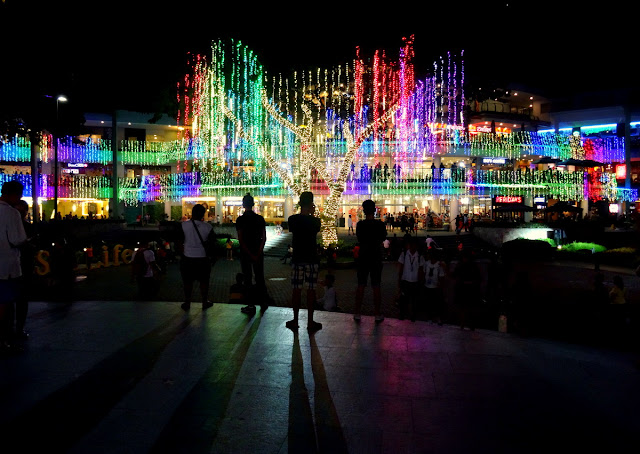 The Lights Show at the Ayala Centre Terraces, one of the two malls we visited for the day. The other was SM City. Scroll down for the short video I made.
I was also in Cebu for some personal affairs and I learned that at SM City there is a government services shared centre where you can ask information about tax services, PRC (professional regulations commission), social security services, Philhealth and many more. This is just brilliant!

When you arrive at the services centre, you just have to take a number per service and then wait for your turn. If your number is still far from bring called, you can just go out and shop, eat somewhere or do some errands and then come back. I took numbers for a few of the services. Some of my inquiry is as simple as finding out my SSS (social security) number. I have not kept track of this since I left 14+ years ago. Time to mend things. #nevertoolate

Well, it looks like there’s more work to be done. Most of my data tax-wise are in Manila and would need to be transferred to Cebu. Anyway it is a work-in-progress. 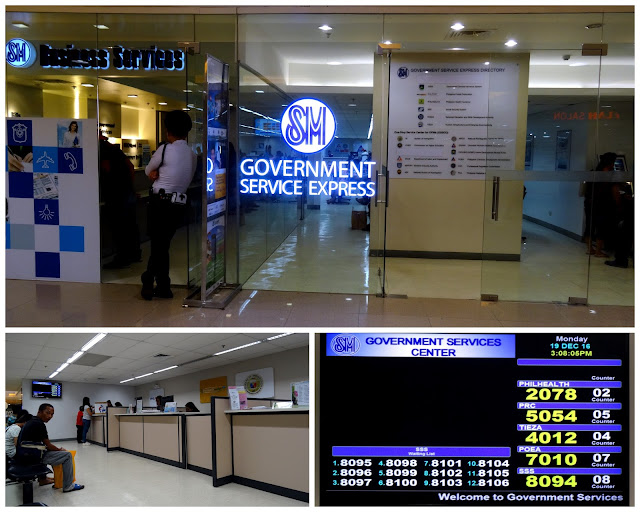 This is a really a good partnership between SM and the government! 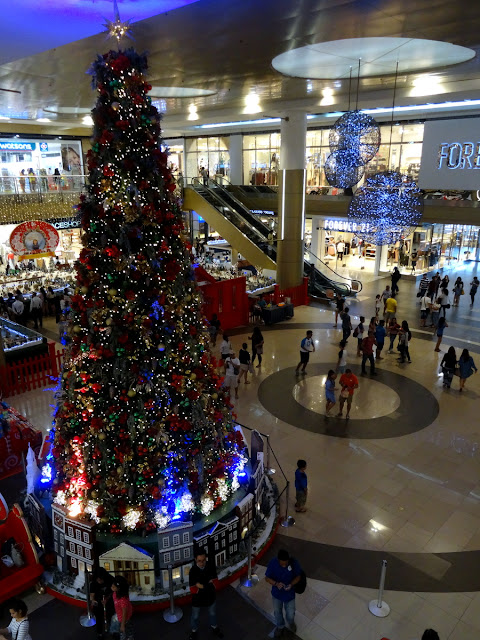 The big Christmas tree at the SM City - North wing. 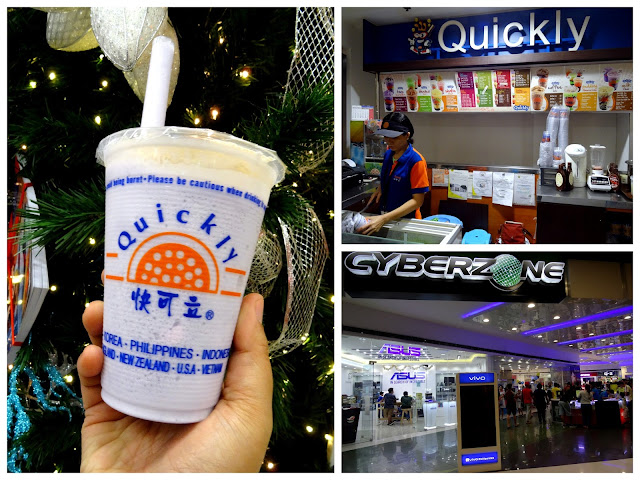 We checked out Cyberzone as well and the sister bought this Taro drink/light shake from Quickly. It is delicious, highly recommended. In the Netherlands computer-related items are sold mostly online these days. Many retail shops have filed for bancruptcy one after the other! Not in the Philippines.
We then had lunch at the Harbour City Dimsum House. I love dimsum, I grew up with this food. Chinese dimsum is a household name in Cebu. There is a very large Chinese community here mostly coming from the Fujian province of China, hence the Chinese influence on Cebuano food. Our family often went to the local Chinese-dimsum restaurants in the 70s and 80s.

I remember Showsheen, International Rice House, Cebu Majestic Restaurant and Ding Hao in Colon Street. We always take-out food from Snowsheen and Ding Hao. There was also Ding Qua Qua, the sister restaurant of Ding Hao in Mango Avenue where I often sneak in for a quick steamed fried rice fix. There was also the Great Han Palace. I am not sure if these places exists anymore?

On special occasions we eat at the White Gold House which was the cream of the crop amongst Chinese restaurants until it caught fire and burned down in the early 90s I believe. Until now the skeletal ruin of the building still stands still, a sordid remembrance of its glorious past. The restaurant was part of the White Gold House Department store which was also the biggest and luxurious then. I remember as a child standing in front of the escalator, too afraid to ride on it because it was the highest I have ever seen. Ah, those were the days. 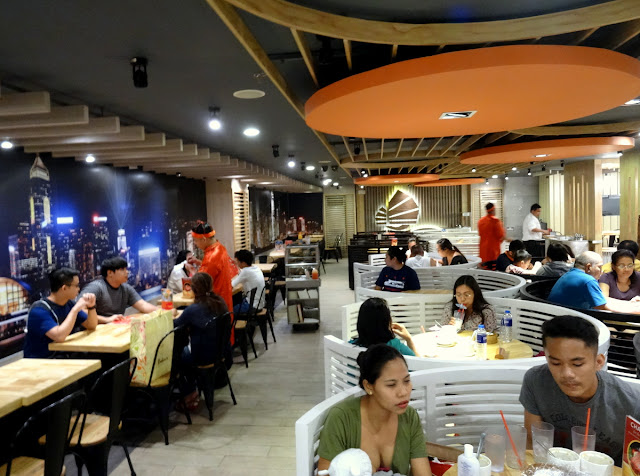 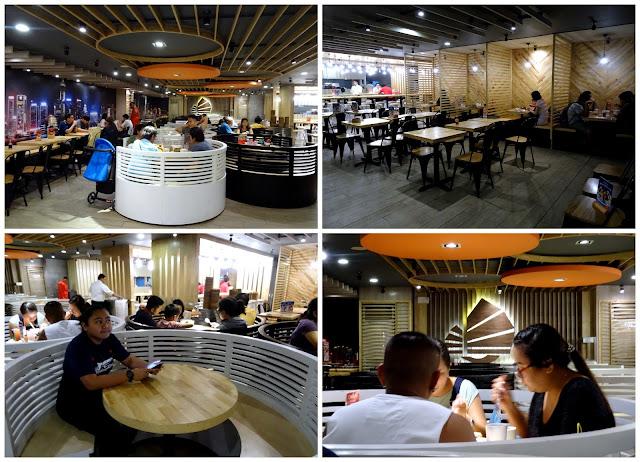 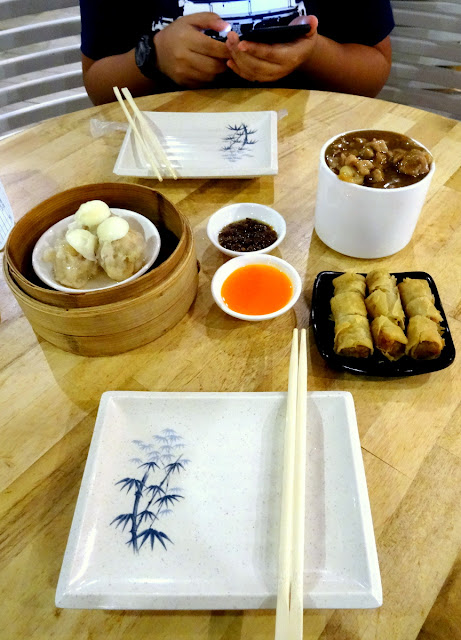 A quick online research and I learned that Harbour City Dimsum House owners were the ones running Ding Hao and Ding Qua Qua before.

So we ordered only a few dishes. Sister and I controlled ourselves not to get carried away if we do not want to gain another extra kilo from this lunch. The list of food items on the menu and the ready-to-be-picked dimsum servings on the trolley cart were begging attention. What a very hard life we have! All those food nostalgia of the 70s and 80s started engulfing me but I have to be steadfast and say no to my cravings. *cry*

I am glad to report that the steamed fried rice still somewhat tastes the same. The sauce still rocks. And the siomai and the lumpia as well. This is truly comfort food for us.

I have not really seen this steamed fried rice dish in Chinese-influenced cities such as Hong Kong, Singapore, Taiwan, Macau and Xiamen, especially on the similarity of how it is cooked and served, and the sauce they use as well. I still have to visit more mainland Chinese Ccities than just Xiamen but I am beginning to think that this steamed fried rice is a Chinese-Cebuano food invention.

If you are a foodie visiting Cebu, you must try the dimsum here. Do not forget to order the steamed fried rice. They have chicken, pork and seafood versions. Definitely a must eat when in Cebu! 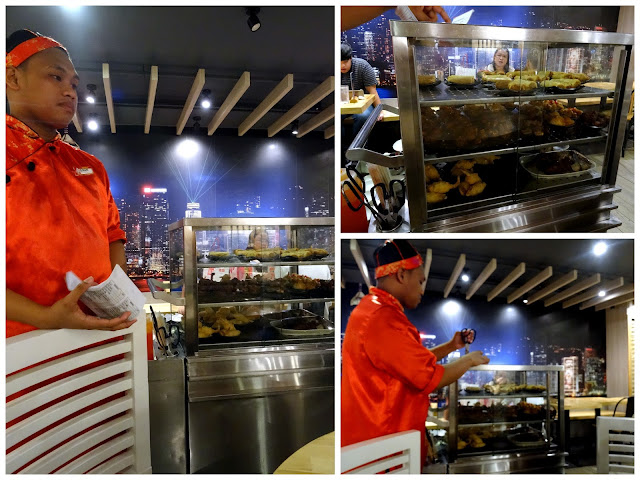 The dimsum concept is the trolley food cart. This waiter dressed in Chinese emperor garb goes around the restaurant with the trolley full of good Chinese dimsum goodness. He also takes down your order for items that are not in the trolley cart, such as the steamed fried rice. 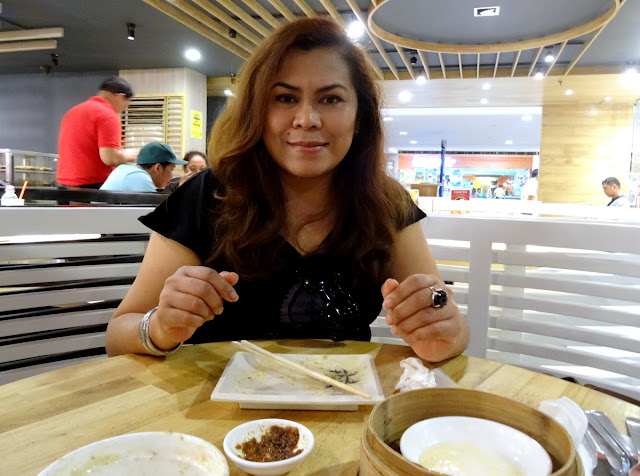 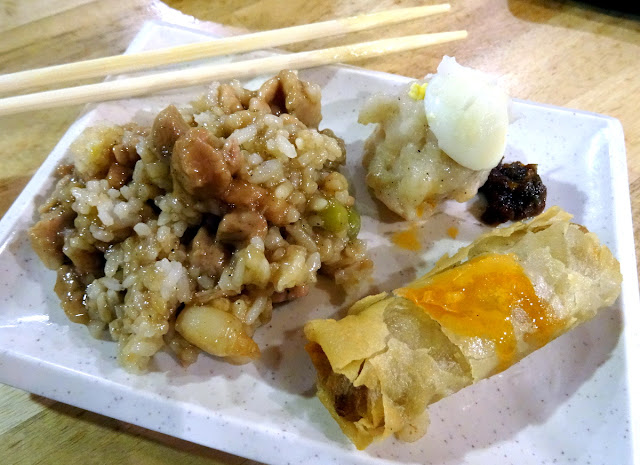 After lunch we continued to shop for the remaining items on the family’s gift wish list. We are almost complete except for the wish list of our dear nephew. He wants some NBA - Golden State Warriors stuff. There is only 1 NBA store in Cebu and it is located in Ayala Center, which is another big mall.

So we headed off to Ayala. It is not too far away from SM City but the traffic in Cebu is unspeakably horrible. I cannot imagine how the traffic situation is going to be like 5 years from now if they cannot solve this current frustrating congestion. To drive to the other side of the city, which before only takes 10-15 minutes, will now take you an hour! Unbelievable.

Traffic. This is the one thing that I really dislike about Cebu these days. Hmm, time to invest perhaps in a helicopter if you have the money, haha. 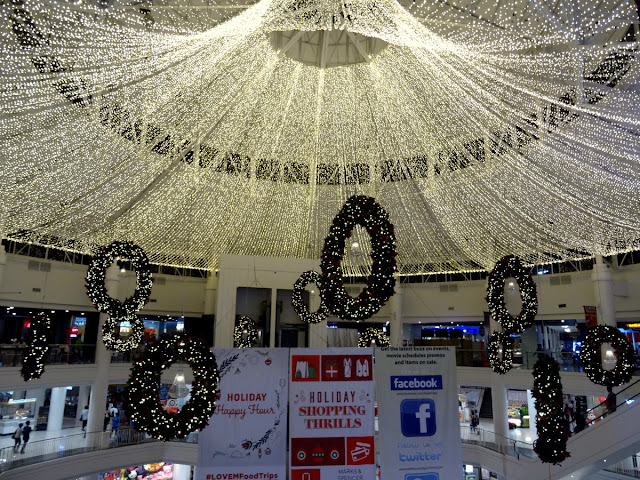 The harem of lights inside the activity centre area of Ayala Centre Mall. 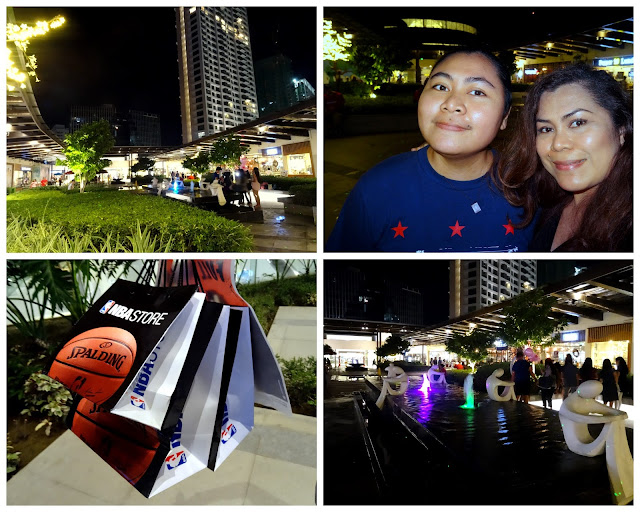 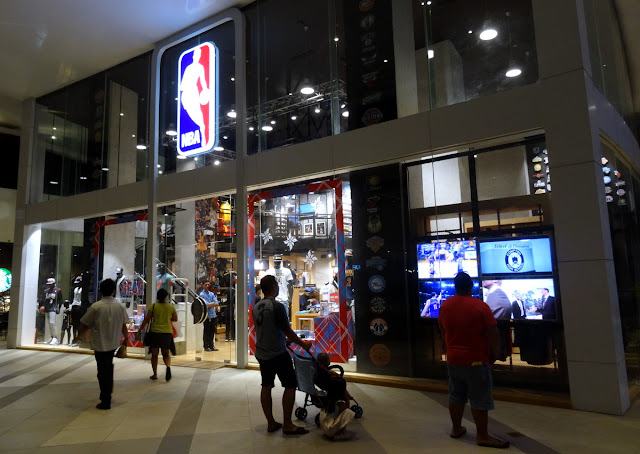 This area is a new wing addition in Ayala. It looks very nice and green here. It is full of yummy and chic restaurants, as well as cool places to hang out.
In Ayala we managed to buy the NBA – Golden State Warriors items our nephew wants. The products sold at this store were not cheap, but we were very glad we were finally done with the Christmas shopping. Nephew is crazy about Stephen Curry and he kept watching online reruns of the games.

I also asked the nephew if he likes football. I was surprised that he knows FIFA but said that he only likes Real Madrid. Hmm, he is a newbie in football because this is usually the first thing people say when they do not know much about the football world and you ask them which one they like. The answer is always Real Madrid. Well, he is still a kid. He is but 10 years old =)

We also managed to see the Christmas lights show at the Ayala Terraces. Very nice! I even took some pictures and a video.

The lights show go every 30-minutes I believe. 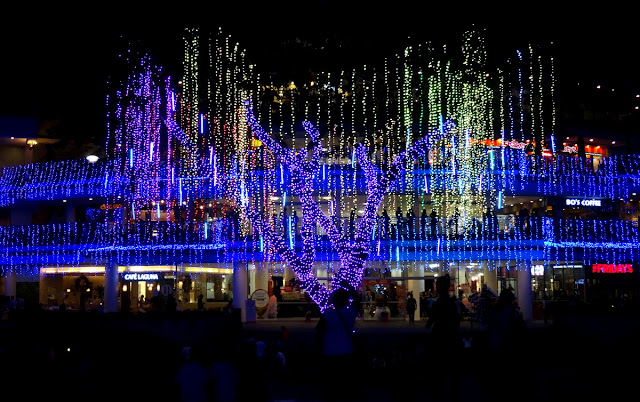 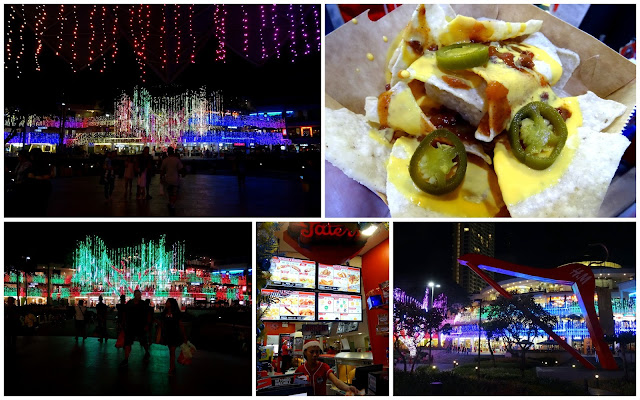 And a little snack down memory lane. Sister said she always buys this when watching a movie.
Sister and I were knackered out and hungry as well but we didn’t have the energy to sit in a nice restaurant anymore, so we resorted to a much easier and faster option, fast food. We both have eaten at Jollibee already, well we had a take out on the second day of my arrival, so we settled for another nostalgic fast food – Chowking.

My sister has lived in Singapore for years and she will soon be moving to New Zealand so we both share the Filipino food sentimentality and craving.

I was however craving for vegetables so I ordered their chop suey. This was nice for a change. When I go for days of not eating (enough) vegetables, I noticed that my system reacts and yearns for it, which is good. 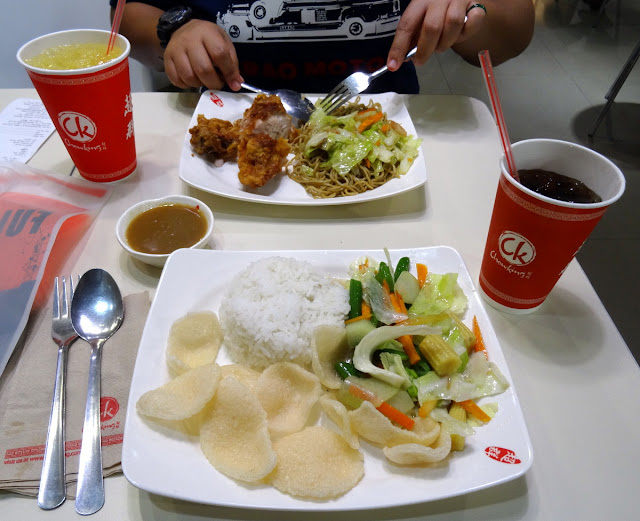 Yup, no meat please! And not too much on the rice and cola as well.
This was a triumphant day because we have finally finished shopping for the gifts!

All pictures were taken by a point and shoot pocket camera or a smartphone.
~~~o~o~o~o~o~o~o~~~