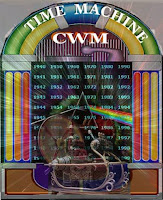 Well, we roar back to the beginning, AKA 1955, where the song that kicks off Martin Era 2.0- Bill Haley's Rock Around The Clock- is still rocking at 23 weeks on the chart!  And by roaring, I mean like Cat 5 Hurricane Janet, who slammed into southern Mexico yesterday, making it the first known storm of that intensity to make a continental landing.  She killed over a thousand- overwhelmingly in Mexico- including the crew of a hurricane hunter team that disappeared in its embrace, losing all 11 crew.  And the sad stuff keeps coming- Charles Bradley, who hit #5 on the M10 back around my birthday in May 2016 with the soul tune Changes, passed away at the age of 68.


I guess now the M10 is officially real world...

So the reason for the "Changes" in the Panel is, well, they didn't have any charts for me to go through that year on my source!  But, a little digging brought me to the fact that Billboard was doing THREE different charts back then- one based on sales, one on what the DJs were playing (because no canned programming yet), and one for what the jukeboxes were raking in!  So I combined them, threw in Cashbox's one chart, and stirred well!  With a bit of a note to that end- Cashbox was in their era of, "if more than one act recorded the song, combine them", which Billboard thankfully was not.  So I had to do a little finiggling.  And what you get is- anybody who got a top ten on any of the charts is in the mix, with points by 20-19-18 etc.  And next, I am going to give you the results from the bottom up- except for the top three, which you get to guess the winner from.  Sound good?  Okay, then, let's bring in Rob Parissi from our POTMs, Wild Cherry, and get this underway!

You realize I was only five years old in '55, right?

I wasn't born yet.  What's your point?  Music lasts forever, unlike careers therein.

Ain't THAT the truth!

So just name off the song, who did it, and the highest it was charting on the four charts this week.  14 contestants, leaving off the top three.

Okay, then.  Lessee... first, with a high of #9 this week on the sales chart, Billy Vaughn's band with The Shifting, Whispering Sands.

Jaye P Morgan- yep, that chick that got too crazy on the Gong Show- was at #7 on the jukebox chart with The Longest Walk.

Say hey!  Bill Haley and his Comets were still as high as #5 on jukeboxes with Rock Around The Clock.

Wow, I know this one too!  Chuck Berry's Maybelline was #6 on JUKEbox AND CASHbox.

Les Baxter's band was at #6 on the DJ list with Wake The Town And Tell The People.

If I can just butt in on this next one, because it's a song my mom taught me to love- the Four Lads and Moments To Remember were at #5 on the sales list.  I remember being really little and thinking the part about "the time we tore the goal post down" was about tearing down the light pole in the parking lot of the Hi-Ho Inn in Poe..

FAS-cinating.  Next is Perry Como's Tina Marie, it was #8 with the salesmen and the Jocks.

Next was one of the songs there were two versions of floating around- but the one that makes our list was the Fontaine Sisters and their version of Seventeen, which was #3 on jukes.

Another double-charter was a song you may know- The Yellow Rose Of Texas.  The first one is by a cat named Jimmy Desmond.  He shared top billing on CB with the OTHER version, but was no better than #4 on jukes the rest of the way.

One more for me, and that is REDACTED, which was #3 everywhere but the jukeboxes, and that knocked him OUT of Chris' phoney-baloney top three.

Well, look! This guy ahead of him had three #4s, and beat him?

Oh, yeah, Mr Timey-Whimey can't go back and fix it.

Rob, that's a great idea!  I'll just go up and change what you said to "REDACTED" and then he can play along too!

Easy when ya make your own rules...

Ain't it, though!  Thanks, Rob, and now, guys, you get a bonus and can pick from FOUR different contestants.  Two contestants, you know how they charted; the other two, the winner had 3 #1s and a 2, the runner up had the other #1, a pair of 2s, and an eight.  If that all sounds confusing, just ignore it, and choose one of these 4 gents:


Pat Boone and Ain't That A Shame...
Roger Williams and Autumn Leaves...
Love Is A Many Splendored Thing by the Four Aces...
or the other version of Yellow Rose Of Texas, this time by Mitch Miller!

Debuting at #10 is ol' "Hootie" himself, Darius Rucker!  He's got a new lp due in October, called When Was The Last Time, and this one just got floated out there from it...

So what fun can we have with the mounds of data I gleaned from the Billboard list of #1 lps of ME2.0?

Well, first I thought we'd look at the big list of soundtracks that the list accrued.  There were several that were one act deals that were differentiated from the more show/ensemble types.  First, the one act shows:

Doris Day's Love Me Or Leave Me
Pianist Carmen Cavallaro with The Eddie Duchin Story
Henry Mancini's The Music From Peter Gunn
Elvis' GI Blues, Blue Hawaii, and Roustabout
Ernest Gold and the Exodus soundtrack
The Beatles with A Hard Day's Night, Help! and Magical Mystery Tour (kinda)
Simon and Garfunkel's The Graduate (which was followed right after with their Bookends)
Isaac Hayes' Shaft
Curtis Mayfield's Superfly
Diana Ross' Lady Sings The Blues
Marvin Hamlisch on The Sting
Earth Wind And Fire's That's The Way Of The World
and Barbra Streisand's A Star Is Born.

Now, MMT was technically not a true soundtrack, as half of it was music from the movie and the rest was other stuff that got thrown in.  Eric Weissberg's Dueling Banjos was his own, with the title cut being part of the actual soundtrack, and thus didn't count.

And now, those that were cast reproductions:

Oklahoma!
My Fair Lady
The King And I
Around The World In 80 Days
The Music Man
South Pacific
Gigi
Flower Drum Song
The Sound Of Music
Camelot
Carnival!
West Side Story
Hello Dolly!  (the cast lp, wherein the title tune was sung by Carol Channing, was replaced at the top after a week by Satchmo's version, which held the top for another 6 weeks)
Mary Poppins
Doctor Zhivago (youngsters, this is not a hotel search site)
Hair
and Woodstock: Music From The Original Soundtrack and More

And you can count Jesus Christ Superstar, kinda, but the rock opera lp actually came before the broadway productions, and is technically not a soundtrack.

So the Alvvays lp Antisocialites is out, and with the exception of In Undertow, the singles haven't quite tripped my trigger... HOWever, I went digging and found this gem inside, and debut it at #9...


The other slice of the lp charts has to do with Greatest Hits lps.  Now, I mentioned back a while when this started that I didn't own many of the "great" lps according to Billboard et al because I liked doing the greatest hits thing, and I wasn't alone.  Here are the Greatest Hit compilations that made the top during the ME2.0:

Johnny's Greatest Hits by Johnny Mathis, which I mentioned last week was also his FIRST lp in America at least.  Guess that takes the debate out of the title for a while...
Time Peace: The Rascals Greatest Hits
Elton John's Greatest Hits (subsequently, this became "Volume One", at which point I once owned it
Beatles 1967-1970
Chicago IX:  Chicago's Greatest Hits, another I owned briefly
John Denver's Greatest Hits
Endless Summer by the Beach Boys, which was basically though not officially a greatest hits package- AND I owned...
Crosby Stills Nash and Young's So Far- which I owned...
and Diana Ross And the Supremes' Greatest Hits.

See, I had a MUCH greater percentage of THOSE...

I knew 9 of the fifty-  six of those among our Panel Contestants...

The big mover this week was a chap who got a lot of his start in the Mystic Ballroom in Jasper, Indiana- Boyd Bennett and the Rockets.  In addition to being the other guy who did the Fontaine Sisters' Seventeen, he jumped from 45 to 34 with the rockabilly hit My Boy, Flat Top.

If you love Mitch "Sing Along With" Miller from the Ronco lps he had in the '70s, you'll love that Slim Whitman was at # 1 in the UK this week with Rose Marie.  Slim was having a time- he had 3 tunes in their top 40 this week.  The biggest song over there that was charting here was Frank Sinatra's Learnin' The Blues, #31 here but just behind ol' Slim there.

The National is up a couple this week, at #8 with Dark Side Of The Gym.

But this week, it's Alkonost who's stuck, at 7, with War Is Closed By Us.

Ducktails waddle up 2 to #6 with Light A Candle.

And Jana Kramer's stuck at #5 with I've Done Love.

The queen has fallen- Lucinda Williams drops to #4 with Six Block Away, after 3 weeks at the top.

Squeeze squeezes up one more to #3 with Innocence In Paradise.

Alvvays- in its SEVENTH week- sneaks into the #2 spot with In Undertow.

And that means the new number one...

Well, Redacted was Roger Williams and Autumn Leaves with 65 points...

So the new President of Time Machine, with 79 points, is...