Go Directly To Jail, for such a stupid idea 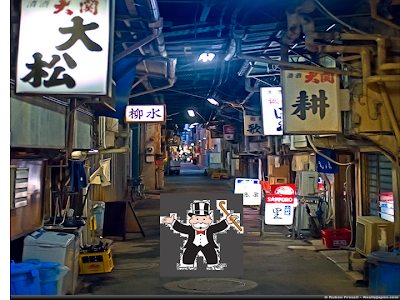 If you thought that Tetris, the Movie was a bad idea, wait until you hear about this one

If you listened very closely, you might have heard, coming out of the far west, the faint but undeniable sound of the bottom of a barrel being scraped. I refer to the news, reported recently in the film trade press, that Ridley Scott has signed on to direct a big-screen adaptation of Monopoly.

Karen Wiesner: I Have Dreamed a Littl…
Most popular jewellery this Christmas…
Review: ‘Trouble’ Scott Van Zen
Blackjack: What’s in a Name?
8 Signs You Should Avoid That Potenti…

Yes, you read right: Monopoly. The board game. The one that's been around for most of the 20th century, in one form or another (Parker formally acquired the rights in 1935). Scott, we are told, was originally slated only to produce, for Universal Pictures, but now will helm the film as well, and reportedly intends to give it "a futuristic sheen, along the lines of his iconic Blade Runner."

Just what you imagine when you play, isn't it? Golden light filtering through Venetian blinds. A well-fed owl perched in the corner somewhere. And, just as you're about to put some hotels on Park Lane, your brother-in-law leaning in close to mutter, "Time to die." Oh yes, it's all perfectly congruent with that family classic we've loved for generations. Amazing, it hasn't been made into a movie already

...Bad as this is, it's not the worst that could happen. On the contrary: in their unending search for a ready-made audience and a "risk-adverse spend", Hollywood studios are teaming with games manufacturers to produce more adaptations. Before long we may be treated to such kitchen-table classics as Battleship (also from Universal) and Milton Bradley's Game of Life and Ouija Board (which, in fairness, could be kind of cool).

As one producer friend put it, "Hollywood would adapt a parking ticket if they thought people would come to see it" – a statement confirmed back in May of 2003 when Paramount paid hundreds of thousands of dollars to option Avril Lavigne's single Sk8er Boi. The cash, it seems, went mostly to acquire that "youthful" spelling; the film never materialised.

Make no mistake: Blade Runner is a flat-out masterpiece, Scott's best and most satisfying movie. But applying its rococo-futurist aesthetic to a venture whose Lead character looks like this, promises a peculiar disjunction of style and subject.

One possible solution may be to shift genres. And in this respect, Monopoly offers no shortage of options.

How about a period piece? Despite Hasbro's rather Stalinist attempts to rewrite history, it now seems clear that one Lizzie Magie, a Quaker living in Maryland, originally conceived the game in 1904. Then called The Landlord's Game, it was intended to warn of the perils of private monopolies, not to celebrate them. Perhaps because of this stern moral rectitude, Quaker board games remain, to this day, something of a niche market.

Scott has form with historical pieces - Gladiator and his 1977 debut, The Duellists, are particularly fine. I can see Amy Adams as an effervescent Lizzie – and Russell Crowe (who these days is to Scott what DiCaprio is to Scorsese) as a pudgy carpetbagger.

What about a war movie? Again, Scott knows the territory, after all. And during the second world war, the British secret service mobilised the International Red Cross to distribute a special Monopoly edition for allied POWs.While one imagines the actual game-play to have been a little on the grim side ("You've just won a beauty contest. Prize: a night with the Hauptbefehlsleiter!"), the adapted game had its uses – not least, to conceal various items (maps, compasses, small amounts of cash) that could aid the soldiers, were they to escape. Though, frankly, to have included a Get Out Of Jail Free card would have just seemed cruel.

It's not that cinema is incompatible with the blithe pleasures of playtime: think of the obscure rules, the elusive clues, of Jacques Rivette's Pont du Nord, which treats the arrondissements of Paris like a giant board game. Or Anthony Harvey's They Might Be Giants, which does much the same for Manhattan. And what is L'Avventura, after all, if not an extended game of hide-and-seek?

Yet this one has a definite whiff about it, somehow. Still, it might conceivably get made, and if it does, will doubtless cost a fortune – neither Scott nor his "futuristic sheen" come cheap. No matter: whatever the budget, they'll spend it the same way: like it's play money."

Which got a friend and I talking about, A) How stupid and ridiculous this is, and B) how on Earth the game pieces will translate to the film, and who will inevitably play them. I submit the following, for your dissection and discussion:
Knowing Scott, it'll all be a mix of either metaphors or ham fisted literality:

Go Directly To Jail, for such a stupid idea