This time we went southeast.

The idea, as usual,  was to stay away from crowds. I'm not scared of C19 for the moment but still feel prudence is called for when things get sardine-y. Besides, quite frankly, neither of us like crowds overmuch. Kathy grew up where the only traffic jams came at harvest-time and I just plain detest so many competing energies mashed together. It being a holiday weekend here, we set ourselves a bit of a challenge.

painful sex during pregnancy - lovelc…
Kappa AUTHENTIC LA84 US ONE Chaussure…
Best Things to Do in Cadaques, Beauti…
Easy Pizza Pinwheels Kids Love
The 11 best tips to become a massage …

Niagara Falls was right out. I've heard from multiple people it's as if there was never a pandemic at all there and you have to suck your gut in to turn around. But there are lots of places around Niagara that are off the water-eroded path.

About the only place we'd determined to hit -- Beamsville Fish and Chips in Welland, highly recommended by our friend Sue -- wasn't open. That possibility hadn't so much as considered crossing our minds...what sort of  restaurant is closed on any part of the last long weekend of the summer? (They were going to open at 4 pm; it was noon; we wanted to see more than just Welland today; we'll have to go back someday. Sue reports it's worth it.

The Canal! I rode the length of it on one of then-future PM Paul Martin's company's ships back in grade seven or eight and I haven't been anywhere near the canal since. We got to the Lock 8 Mellanby Park just in time to catch the Maria G. Valletta moving down the Canal at about a tenth the speed of smell: considerably slower than a walking pace. 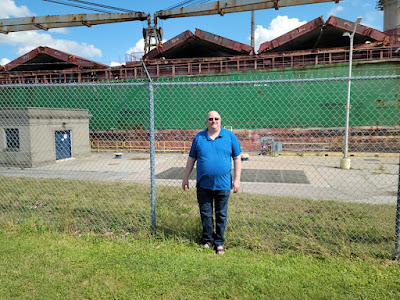 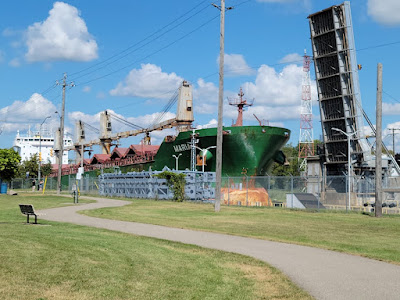 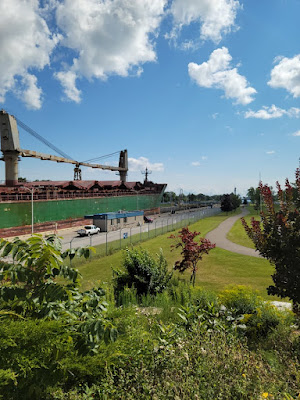 Lunch was at the South Coast Cookhouse, which was worlds better than its surroundings. Crystal Beach was once a booming little town with an amusement park that operated from 1888-1989. The beach itself is lovely; the town around it has seen much better days. Many of the businesses are boarded up, and those that aren't look dingy and dilapidated. But the restaurant was open, and partly open to the air. A very good lunch.
From Welland, we wandered along the seashore lakeshore. Quite frankly, Lake Erie doesn't hold a candle to Lake Huron: the water in Erie is brown rather than blue, scummy rather than crystal clear, and rankly redolent of dead fish. It also doesn't have anything like the shoreline Huron boasts. Huron, and especially the "sixth Great Lake", Georgian Bay, is just worlds cleaner in every respect.
We tried to get to the Port Abino Lighthouse, but it was Covided up tight. (It's hard for me to understand, honestly. Obviously it's up to any business whether to open or not, but I can't think what excuse a tourist attraction needs to STAY CLOSED when so many businesses have closed forever.)
Not to be deterred, we found another lighthouse one town to the west, where the Grand River empties at Port Maitland: 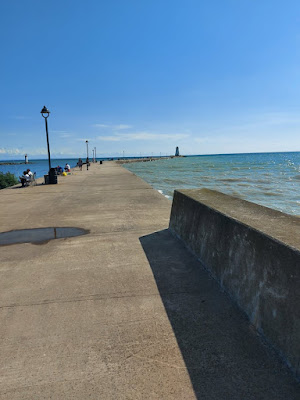 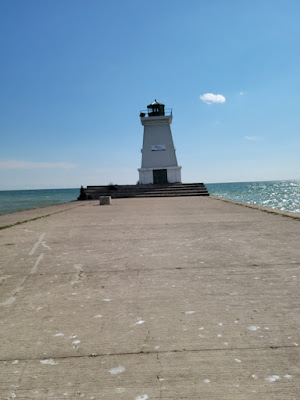 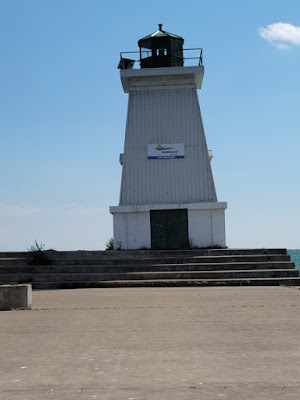 A wee bit of a hike. It was almost, but not quite, windy enough for whitecaps. I would not advise going anywhere near this pier in a serious storm: you'll get swept off. 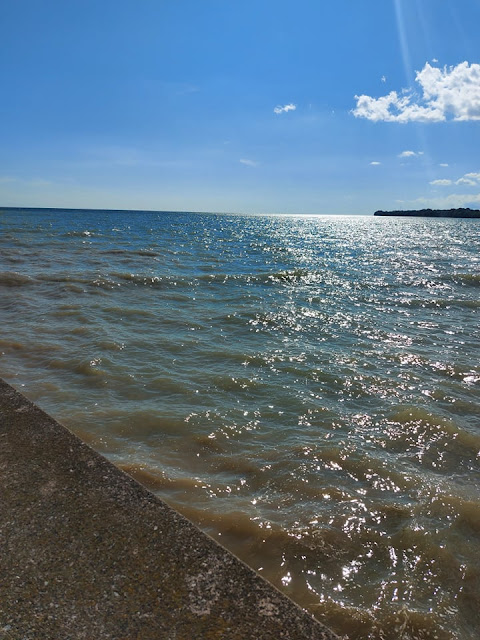 Behind the lighthouse, land's end: 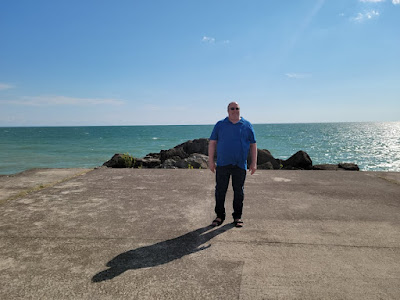 The water looks almost Huronical...
Next stop, Port Dover. We double-dated with Jade and Darien minigolfing here a few years back, and Kathy was relishing the chance to kick my butt again...but it was waaay too peopley...we didn't even slow down.
One of the best things about Kathy and Ken days like this: we're easy. I was disappointed not to get to try that Beamsville fish and chips, and Kathy was disappointed not to see the Port Abino Lighthouse, but "disappointment", contrary to popular belief, need not have any sort of emotional attachment to it. The way I look at it, this is yet another of those words that needs a hyphen. We had an appointment (even if it wasn't written down anywhere) and we got "dis-appointed". There's always something around the next bend, and often for every thing you were looking forward to and missed out on, there's something you never suspected that turns out to be a highlight.
Behold, Lynne River Falls, which is not in our Waterfalls of Ontario book: 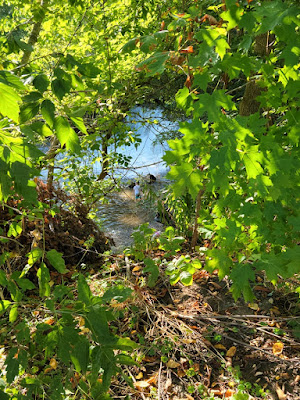 I hear running water...hey hon, they're playing our song! 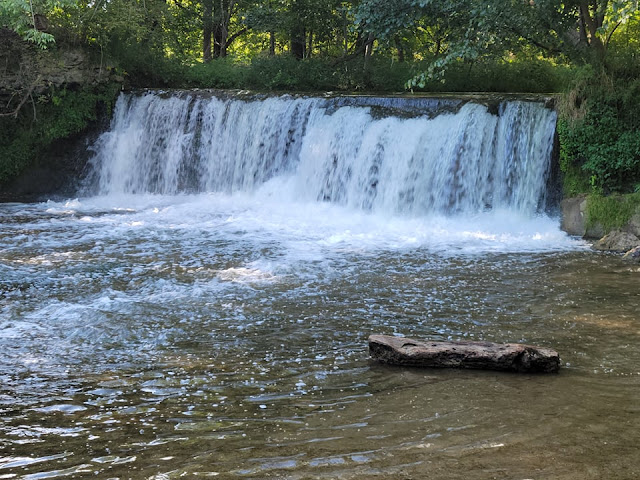 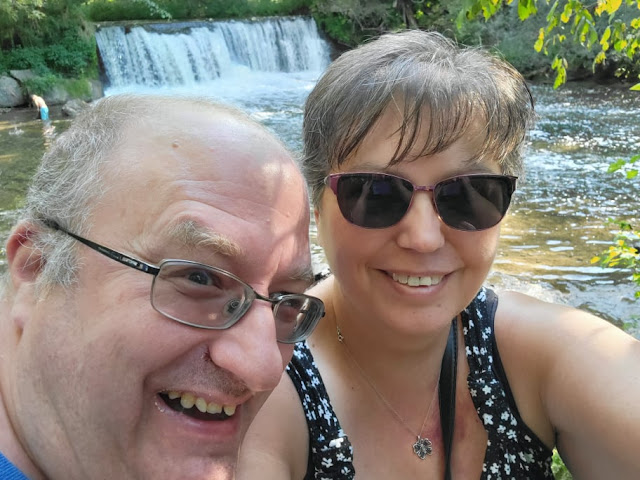 From Port Dover we wandered back home, stopping only to pick up two small pizzas from the best Pizza joint in the known universe, Woodstock Pizza and Pasta. For the first time in my life, I chose not to finish a small pizza. This is significant because I have utterly routinely eaten a medium by myself and on many occasions have done the same with a large.
Noom refuses to allow me to pay in instalments, or lower their price, so I'm doing this on my own. I have two friends who have recently lost a large amount of weight (and Kathy has lost as well), so I am motivated. Tomorrow, weather permitting (it won't), I'm going to start walking.
Back to the weekend. We got home, ate pizza, sat down to watch a mutual favourite movie -- Contact, with Jodie Foster. It holds up wonderfully, and I had fun teasing out similar lines and mannerisms between S.R. Haddon, the reclusive billionaire, and another character Foster would share screen time with named Dr. Hannibal Lecter. ("Clever girl", says Haddon, and whereas most people would immediately think velociraptor, I filled in the next line from Silence of the Lambs: "You're so close to the way you're going to catch him."
Then I lost the cat.
We were going to go out, brave the bees and mosquitos, and indulge in some coolers on the deck. Luna wanted to be on, or even more improperly, under, the deck as well, and it took an hour of teamwork, cajoling, failed bribes, and quick reflexes from Kathy to finally snag her and put her back inside where she belongs.
Today we went to Southside Park to feed the ducks. We knew not to bring bread but didn't know what else might bring them waddling (maybe some grapes? Naw. Quoth the Google, corn, oats and rice. The Google neglected to inform us that corn is crack cocaine for ducks while oats and rice are, respectively, kale and brussels sprouts. Oh, they'll eat it if they have to, but....
....the gentleman behind us had corn.
They ignored us with haughty dignity as they congregated in search of The Good Stuff. 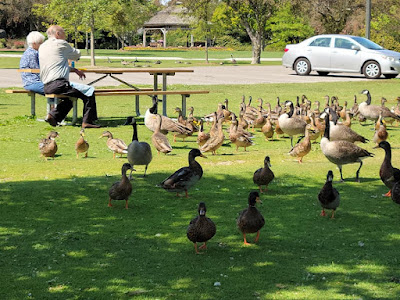 That's maybe half of them. Maybe. Ducks, cobra chickens (Canada geese) and a family of swans that crashed the party. Honk honk. 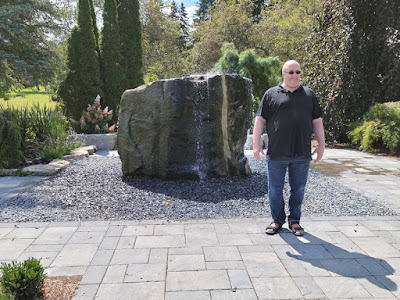 More running water!
Another lovely weekend. Next on the docket is a trip up the Escarpment to see the fall colours. Thank you, hon, for the journey. It means the world, and so do you. 💜