(little in-joke there: Kathy kept getting the two confused, eventually deliberately.  Kind of like this.)

A cold front has swept through overnight and it's nipply out -- about 10C/50F. In its previous incarnation as the Traveller's, our hotel had been known far and wide for its breakfasts. Lingering C-19 protocols mean they're only serving a box (continental) meal now, and we're in the mood for something more substantial. Off to Trapper's Choice. This is yet another locally iconic place -- it's been around my entire life -- and this morning an indoor table is a half hour wait. Kathy and I have had more than a few picnics in less-than-ideal conditions, so we opt for the patio.

Top 10 trends in 2021 for jewellery i…
Former Malta Government Official Beco…
Karen Wiesner: The Stories Behind Cla…
Discover the Magic of Venice in Novem…
Trigger Warning: A Chinese Father Sav…

The second stop today is no stranger to this blog. Bearly Used Books. They're up to 300,000 books on hand now. The place is just completely packed: it's actually a bit overwhelming. Dad has gifted me with some store credit. In the end I replaced several books that were read to tatters here, and one I lent out and will never get back. As is usual, I keep thinking of authors I should have checked for, long after I leave.

We walk around downtown, and stop in to the Trading Post, which has had pride of place on James Street at least since I was a wee sprat. I got myself a copy of a T-shirt I owned 25 years ago -- a map of Georgian Bay etched into it.

Then out to Waubuno Beach: 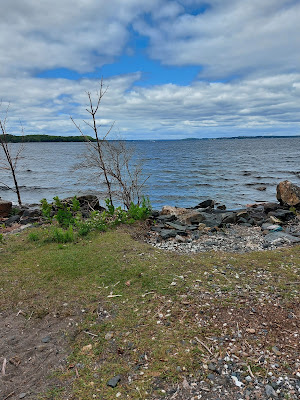 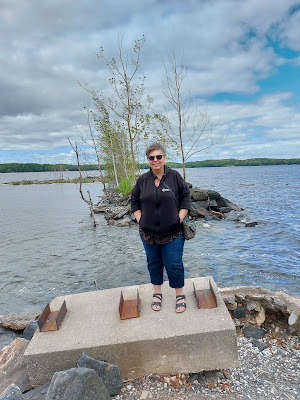 When Kathy and I were planning this trek, we were looking for boat rides. The original plan was to take the Segwun out of Bracebridge, a two hour cruise through Millionaire's Row on Lake Muskoka, past cottages belonging to Kurt Russell and Goldie Hawn, Tom Hanks, Steven Spielberg, Wayne Gretzky, and others. The Segwun, alas, hadn't run during the pandemic and wasn't running when we planned this. (Of course, it is NOW.)

Plan B: the Island Queen in Parry Sound. Kathy did the romantic dinner cruise 23 years ago, and it's not offered this year; I've been on that boat several times throughout my life and would never turn down the chance to go. We couldn't get an Island Queen cruise to fit comfortably into our schedule, so we ended up settling for the one-hour Lady Wenonah II. (We wanted to do a floatplane or helicopter tour, but couldn't get that to fit comfortably into our budget. Yeesh, stuff is pricey.

Kathy has always said she's impulsive, and honestly I don't see that side of her often, but I saw it today as we snagged two of the last tickets available (everything still has Covid capacity limits) and boarded the Island Queen for a three hour tour. 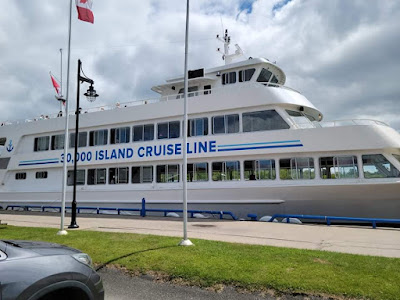 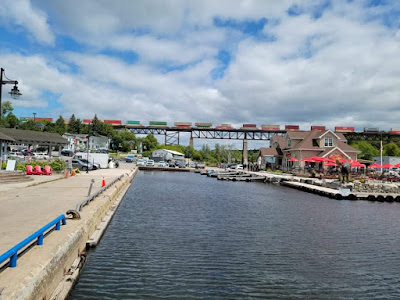 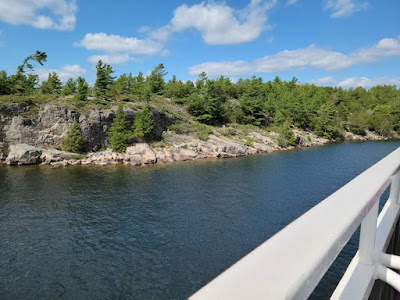 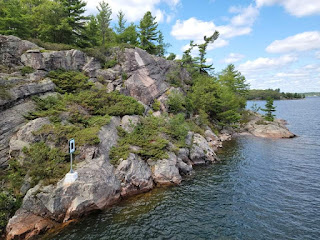 Before we even left port, an announcement came over the loudspeaker. There is an ambulance on Parry Island, and when that happens, the Swing Bridge doesn't swing. "We're going to take our northern route instead. Anyone who had their heart set on the swing bridge is more than welcome to disembark and come back another day."

I had been looking forward to going through that passage. It's really cool. But also: I had never taken the northern route.

It honestly wasn't as interesting as the traditional cruise: there was a lot more open water. It still did go through Hole In The Wall, though, which is a highlight. 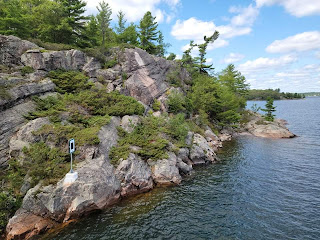 Hole In The Wall is hard for a camera to do justice to. Here's a video that does.

nce we came back to port, we did a tiny bit more exploration of the town and then  set out for Minden. MIDLAND.

We passed through here last year, but tonight we're staying at the Midland Inn and Suites. Kathy picked this one, and it's the nicest room of the three we've seen by quite a margin. The mattress is still a torture rack, albeit not quite as bad as the ones in Bracebridge and Parry Sound. On the plus side, a full, and really tasty, hot breakfast is included--but that's tomorrow. Tonight we're eating at Phil's Pub and Eatery where I had a wonderful club sandwich and Kathy enjoyed pickerel and shrimp.

Dinner done, we hightail it to the harbour and finally catch a sunset. We've been trying to do this for two years and the weather never cooperates. Tonight, it did. 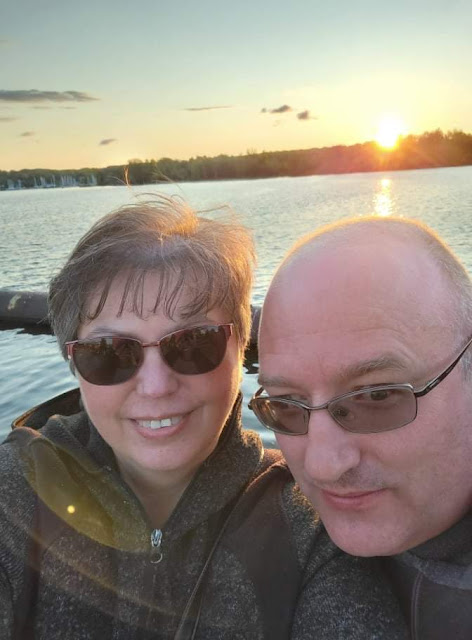 The sun went down as if it was on an escalator, sinking below the horizon in one smooth, remarkably quick motion.

Morning. Both of us are in dire need of caffeine and a familiar bed. Tea'd and coffee'd up, we depart for home--the scenic route again, taking in a park in Collingwood we missed last time we visited 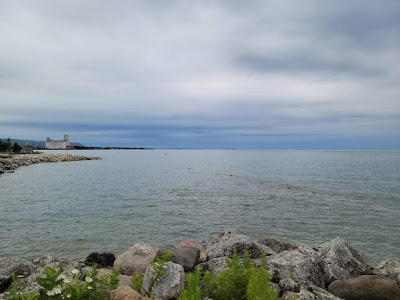 and finishing off with the traditional Meaford visit to Perogie Palace for the best perogies either of us has ever had. This is our third time here and not our last.

Georgian Bay calls to us. We'd move up here, given half the opportunity.

This was a great trip. I want to thank my dad and stepmom for one of the best meals I have ever had, and even more so, for seeing us. I want to thank Gertie for the entertainment (she pronounces "Seguin" like "se-GEEN" when it's actually pronounced "SEE-gwon"; several times she routed us incorrectly and stuttered as if drunk, and oh, yeah, she must have told us six or seven times "in five hundred metres, keep straight to stay on Highway 11 North" why are you telling us this you've already told us we're going straight for twenty km, Gertie you goof.

And of course I want to thank Kathy for the company, the laughter, and the love. We make a good team. The treks are getting more and more ambitious: we're hoping for a circle tour next year covering Manitoulin and Sudbury. And one of these years we're going to hit somewhere exotic: Hawaii, perhaps, or Iceland, or Scotland. That's a long way off. In the meantime, baby, you're my open road.