Weekly 'What We've Been Doing' in Virginia Beach

Time is flying right by for us at Virginia Beach.  We've been busy seeing things, enjoying some nice weather, spending time with friends and most of all -- spending time at the Goldmans!  Though we are on the other side of the city, we have been going over to Jon and Kelly's and hanging out with Brooks.

Last Saturday we began by attending the yearly RV show here at the Virginia Beach Convention Center.  It was a rather small show but still had some interesting displays.  My main interest this time was in looking at the Class C's.  We are not in the market for one now, but who knows?  Maybe in the next few years, we might be...

The one that impressed me was the Thor Chateau 31' model.

I really liked the full side slideout on the Driver Side.  Were we to downsize, it would be an adjustment from current size of the Roadrunner. 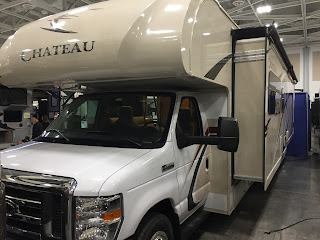 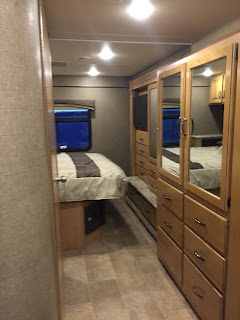 We are a few years away (hopefully) from making such a move, but I like keep up with the trends in the industry.  One trend is for a full length slide out.  This model has that and it is the first one I've seen on the Class C.

Another newcomer RV is the Tiffin Class B - the Wayfarer.  We will look forward to seeing those out and about.  Mr. Tiffin told Pam and I in December that they would be taking orders in March 2017.

Aside from the RV show, we've been watching the weather and today in fact, I will be emptying the grey and black tanks, putting away the sewer hose and getting ready for some more freezing weather.
While checking things out yesterday, Pam found a drip under the engine that is a problem.  This is a picture I took laying on my back and looking up from the concrete pad. 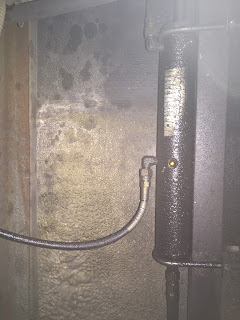 I could see a slow drip coming from the connection to this piece. Later today, I will put out the kitty litter to absorb the spill and also take off the inside cover of the engine to take a better photograph so we can send it to a shop in the area and get it fixed.
I hate the fact it is leaking but once again, it all goes with the territory.  It doesn't look like a major issue but we'll have to get it into the shop to get it fixed.
Yesterday we had an outing with Kelly and Brooks to the Virginia Aquarium.  What a great place!  We are going to be here for a few months so we decided to get a yearly pass in conjunction with Kelly.  It came out to be about $65.  If Pama and I got a couple of more times, it will have paid for itself.
I met these two nice ladies at the gift shop.  They promised to check out the blog after I gave them a contact card. 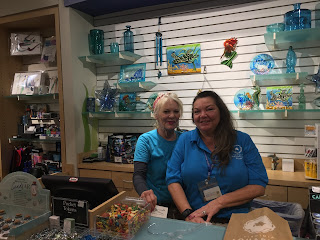 On into the displays:
This little board shows information about Virginia's Rivers that are interesting to me including the fact that George Washington fished for over 1,000 shad in 1771. 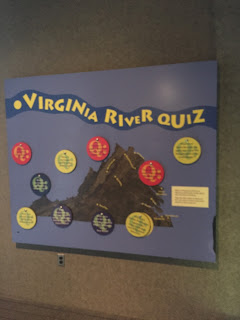 It really speaks to the abundance in the rivers in days gone by.  I don't think I realized how plentiful game and fish were hundreds of years ago.  Thank goodness for the fisheries and game and fish departments that replenish our rivers and lakes and streams.

Brooks was glad to be wandering (running at times) around the aquarium.  He was interested at times in the fish but also quite enamored with other things. 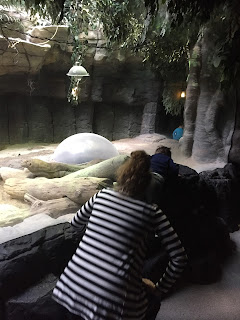 He liked to climb back and forth along the little uneven wall against one of the large window walls of the aquarium. 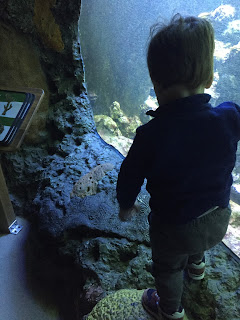 And he liked to look out over the channel near the aquarium. 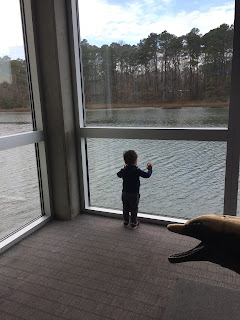 And he liked to reach into the tank of rays that had been 'defanged' (not the technical term) and were harmless. 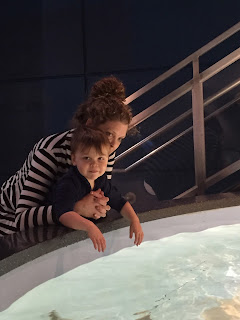 And after a busy hour or so, he put on the brakes and had a quite few moments by himself... 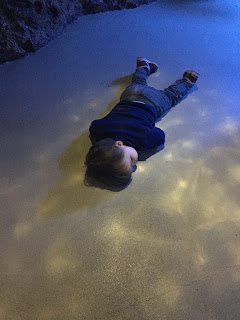 Sometimes you wonder what is going on in the little guy's mind... 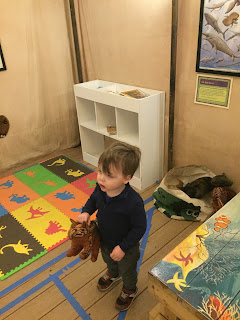 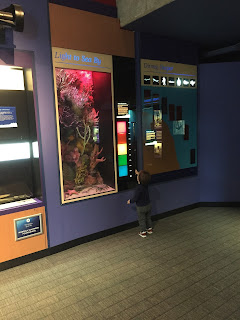 The couple of hours we spent at the Virginia Aquarium were well worth it and we'll undoubtedly be back.  It is a fascinating place.  It reminded me in a way of the Monterey Aquarium though that one is on a much larger scale.  Both are unique and educational.

We are enjoying our time here and have now been in VB a month!

Thanks for joining us today on the Roadrunner Chronicles!

Weekly 'What We've Been Doing' in Virginia Beach