No kidding - we spent some time yesterday with a lot of other folks at the Coon Dog Cemetery Celebration in Northwest Alabama.  It was named after Key Underwood who lost his coon dog of 15 years.  On Labor Day in 1937, Key buried his faithful coon dog Troop at the camp where local hunters had gathered for years.  It was Troops favorite spots.

Every year since then over the Labor Day Weekend Coon Dog hunters and the curious have gathered at the Cemetery to celebrate coon dogs and coon dog hunters.  It is a one-of-a-kind place.

We heard about it from friends here at the Red Bay Downtown RV Park who planned on attending.  The details on the FaceBook page read:

Letter from William Shakespeare Disco…
Binance Celebrates Multiple Fait Gate…
The Ultimate Winter Bucket List Accor…
Royal Palace Rugs
I’m spinning a lot of plates today
79th Labor Day Celebration to honor Coon Hunters and their Coon Dogs.
Live music featuring Travis Wammack and the Snake Man Band and
The Southern Strangers.
Buck Dancing, Liars Contest.
L.O. Bishop BBQ Available.
Souvenirs include
T-Shirts, Caps, Coffee Cups and Magnets.
Arts and Crafts.
We decided it was something we did not want to miss and arrived about 11:15 AM.  There were only a few signs until we got there and it was off the beaten path. 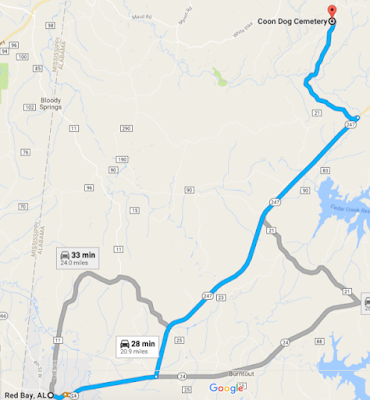 We were starting to wonder if maybe we had gotten the right information.
But as soon as we neared the cemetery, there were lots of cars parked on both sides of the road.

It was about a quarter of a mile walk to the festivities, but they had a group of volunteers with golf carts who were riding up and down the road doing a shuttle service. 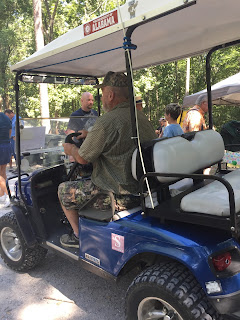 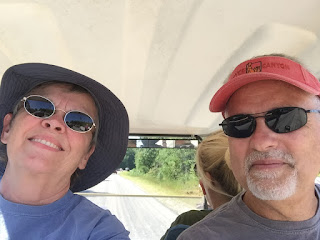 That was a nice touch!

Once we got the the cemetery, there were a number of booths set up 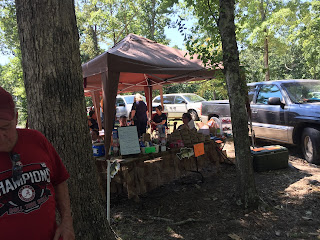 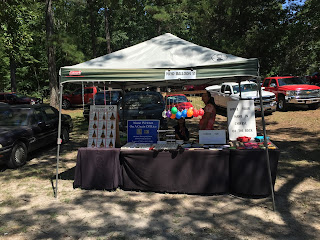 and they already had the band getting ready to play under the covered area. 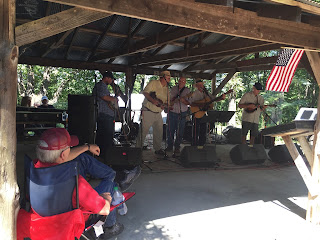 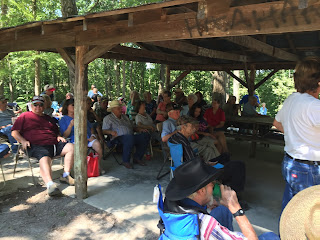 The rest of the us spread out chairs wherever we could find some shade. 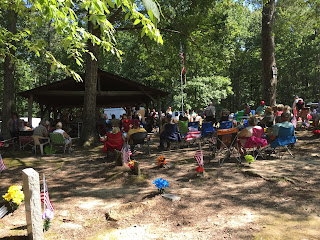 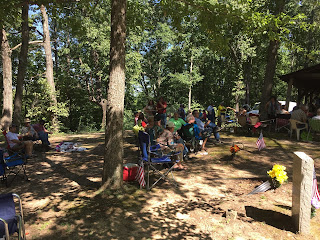 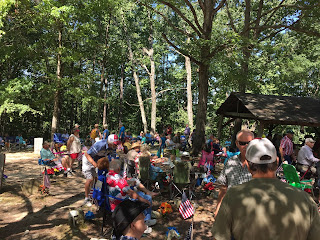 Meanwhile, we had to check out the headstones. 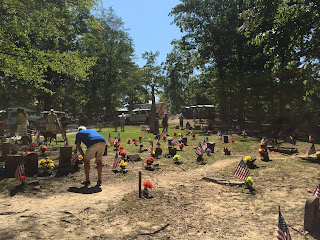 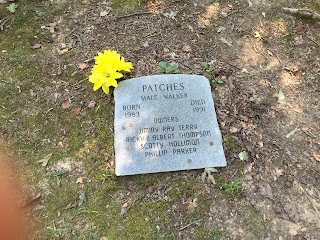 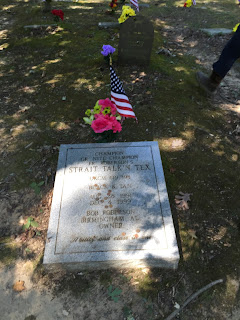 The cemetery is only for bonafide, certified, genuine coon dogs.
"We have stipulations on this thing," said the late O'Neal Bolton,
former caretaker of the Coon Dog Graveyard. "A dog can't run no deer,
possum -- nothing like that. He's got to be a straight coon dog, and
he's got to be full hound. Couldn't be a mixed up breed dog, a house dog."
The centerpiece is the monument of a couple of coon dogs treeing a coon. 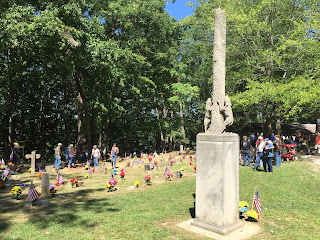 Here's a group shot of our fellow Downtown RV campers. 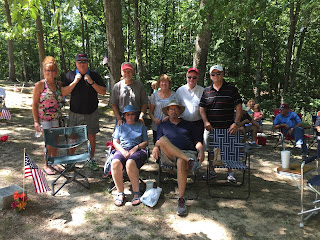 And a photo of Bob with local friendly people Ann and Jimmy. 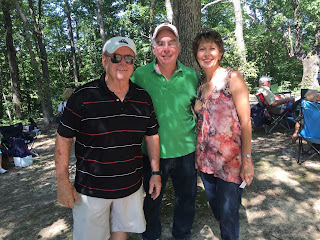 In fact, Ann was telling us their son was pallbearer in a coon dog funeral a few years ago which was quite an event.  She even forwarded me the newspaper article. 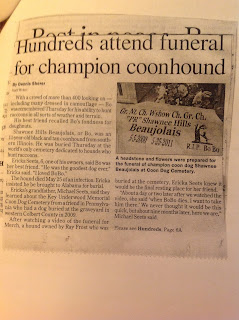 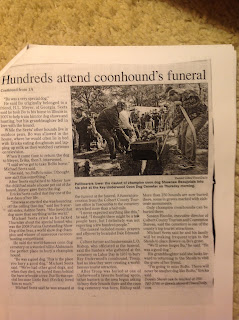 It wasn't long before they had the BBQ lunch line set up and Pam and I shared a box. 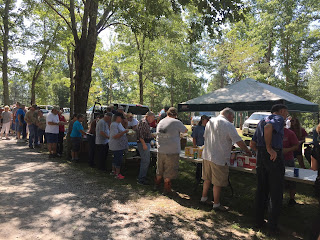 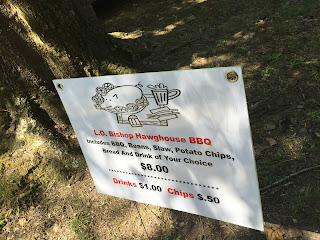 The line was long and the food was good!

It was a fun time at the cemetery.

We heard some oldies including Bobby Vinton, the Everly Brothers and BJ Thomas.  Travis Wammack and his band were pretty good.  It was good listening.  One guy got up and was 'moved' to do a little buck dancing (a regional clogging kind of step).  We also heard some bluegrass music and one of the most unique national anthem renditions I think I've ever heard.  It might have been a Jimi Hendrix version.

At any rate, it was another unique experience for us.  If you are in the area next Labor Day - we recommend it! 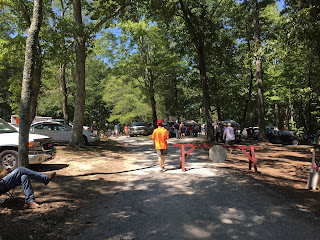 Thanks for joining us today on the Roadrunner Chronicles!